A recent report has shown most journalists are attacked while photographing, filming or holding cameras. Much of Germany's violence against the press happens in the east and most perpetrators lean to the far-right. 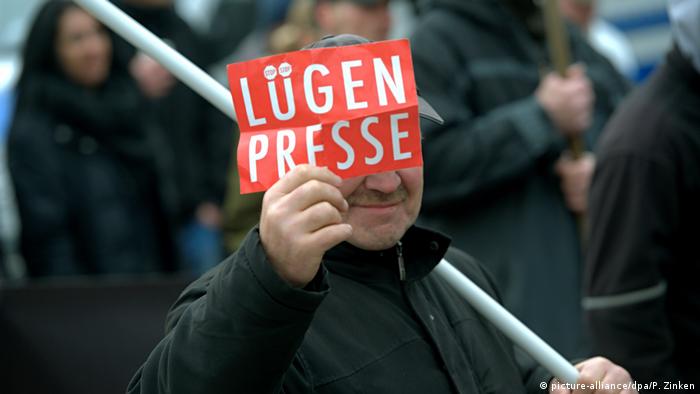 The European Center for Press and Media Freedom (ECPMF) published a report on Thursday that found an increase in violence against journalists in Germany. In particular, the report showed a sharp rise in attacks on the press in 2018, when some 28 journalists suffered a total of 22 verified physical assaults so far.

By contrast, there were only five registered attacks against the press in 2017. The year with the most violence against journalists was 2015, with a total of 43 verified attacks.

The center acknowledged that its figures differed from those of the German Federal Criminal Police Office, especially in the eastern German state of Saxony, but the authors attributed the discrepancy to data collection methods.

Most attacks happen in the east

Eastern Germany was the country's region with the most active hostility towards the press, and most of the violence against journalists came from right-leaning attackers, the report said. Of 2018's 22 assaults, over half of them (13) happened in Saxony. Four attacks were registered in neighboring Saxony-Anhalt and two took place in Thuringia. The states of Brandenburg, Baden-Württemberg, North Rhine-Westphalia and Brandenburg each had one attack.

The ECPMF's findings come on the wake of the far-right riots in Chemnitz on September 1, when demonstrators took to the streets to protest the death of a German-Cuban man during the city's street festival. On that particular day, nine attacks occurred against 11 journalists that were present and covering the protest, the report said.

On average, the study showed that most of the journalists attacked were targeted while photographing, filming or holding cameras during demonstrations and events. Between January 2017 and September 2018, 24 out of the 27 attacks on media involved journalists working with cameras.

In many of the cases, the report said, the attackers are triggered by what they see as being filmed against their will. Last month, a man at a far-right demonstration in Dresden berated a camera crew for filming him and accused them of abuse. He was revealed to be a member of Saxony's police force. The man left his position when his employment status became public.

The police department later apologized, as officers on the scene held the journalists for 45 minutes without proof, in what was seen as an attack on press freedom.

The ECPMF report noted that along with the rise in physical attacks, less widely documented verbal attacks and threats are also very troubling. The number of severe verbal assaults against journalists remains "extremely high," according to the report.

Commonly used Lügenpresse, or lying press, insults form an integral part of right-wing populist and extremist behavior at political events and demonstrations since 2015.

The report detailed the difficulty in distinguishing between "concerned citizens" and neo-Nazis. "The readiness to commit violent acts especially at gatherings has grown, and also the readiness of some 'angry citizens' to tolerate and legitimate violence against journalists is remarkable," the ECPMF said.

"Everyone who can be identified as a journalist at such gatherings must expect to be openly attacked," the report concluded, saying that the findings represent a danger to freedom of the press in Germany.

The bronze statues of wolves performing the Nazi greeting have been displayed all around Germany. Now they've been installed in the eastern city of Chemnitz to protest the xenophobic unrest that took place there. (13.09.2018)