PEGIDA protester in row with reporters was police employee

Saxony authorities have admitted that the man who berated a camera crew during a far-right PEGIDA protest last week was a state police employee. German broadcaster ZDF called the incident a violation of press freedom. 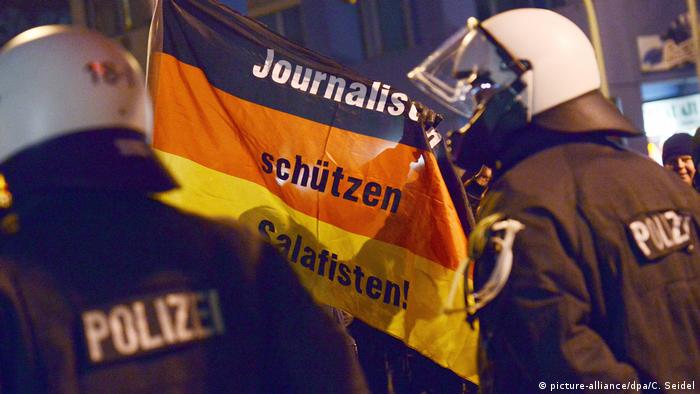 Police officials in the German state of Saxony have become further embroiled in what has been described as an attack by authorities on press freedom.

On Wednesday it emerged that the police's decision to stop reporters during a far-right PEGIDA protest last week was prompted by an employee of the state police service.

The camera team working for German public broadcaster ZDF was held for 45 minutes during the demonstrations after a protester told officers that he had been verbally abused by one of the crew members.

Federal Justice Minister Katarina Barley on Thursday wrote that the events raised concern and needed to be comprehensively investigated.

Footage of the incident posted by ZDF journalist Arndt Ginzel showed the protester chanting "Lügenpresse" (a far-right chant that translates as "lying press") before claiming, falsely, that the crew had illegally filmed him taking part in the march. The man then complained to police, who went on to question and hold the crew.

Saxony's state Interior Ministry said the protester in question was a state police employee attending the far-right protests as a private citizen. The man had no police powers and was currently on leave, ZDF reported the ministry as saying.

"The State Criminal Police Office (LKA) will decide on the possible consequences once this matter has been clarified and the person concerned has shared their version of the events," Saxony Interior Minister Roland Wöller said. "Of course every citizen in our country has the right to freedom of expression. However, I expect all employees in my department to behave appropriately at all times, even if they are in public and express themselves privately."

Peter Frey, editor-in-chief at ZDF, has described the police's decision to hold the camera crew as a "clear restriction of freedom to report."

Journalist Arndt Ginzel accused the police of acting as "the executive branch" of the far-right Alternative for Germany (AfD) party and the xenophobic PEGIDA movement. Ginzel has also filed his own official complaint for insult.

After footage of the incident was posted online last week, Saxony's premier, Michael Kretschmer, wrote on Twitter that he believed the police had acted appropriately.

Last week's demonstrations in Dresden saw some 600 to 800 supporters of the AfD and PEGIDA take to the streets to protests Chancellor Angela Merkel's visit to the eastern city.