The faces behind Germany′s far-right protests | Germany | News and in-depth reporting from Berlin and beyond | DW | 14.09.2018

A recent series of far-right protests made headlines around the world and fueled concern over increasing racism and xenophobia in Germany. DW examines the individuals who helped to organize these rallies. 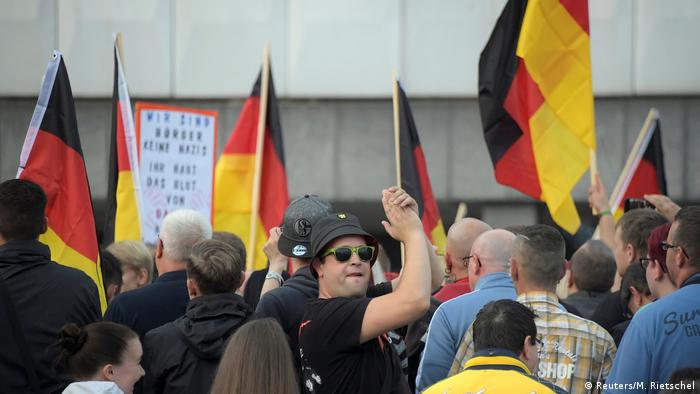 "Dim-witted far-right extremists." That is how Holger Stahlknecht, the state interior minister of Saxony-Anhalt, summed up the participants at the wave of recent far-right marches in Chemnitz and Köthen. What has been called mourning marches came after two murders said to have involved refugees. Many of the participants openly chanted racist slogans, and there were reports of foreign-looking individuals being chased through the streets of Chemnitz.

Germany's domestic security agency, the BfV, along with its state-level affiliates, is responsible for monitoring and investigating individuals who plan to or are involved in violating civil rights enshrined in the country's constitution. Yet none of these authorities have provided any insights regarding the recent far-right protests. Saxony's security agency told DW that out of principle [they] do not comment on any individuals.

Endstation Rechts, which was founded by the youth wing of Germany's center-left Social Democrats (SPD) in 2006, functions as a kind of news platform for covering the country's far-right scene. Tim Schulz, who works for the organization, says they regularly photograph people participating in right-wing rallies.

Miro Dittrich and his colleague Zamira Alshater of the Amadeu Antonio foundation carry out similar work. Founded in 1998, the foundation is dedicated to strengthening German civil society and combating racism. It is named after a black man who was murdered by German extremists and is partly funded through private donations and state support. Activists research far-right activities, and film and photograph right-wing events. Members of the organization were in Chemnitz and Köthen when extremists took to the streets.

Both Endstation Rechts and the Amadeu Antonio foundation report that the organizers and participants of the first spontaneous march in Chemnitz predominately belonged to Germany's far-right hooligan, rock music and combat sports scenes. Subsequent rallies were then organized and attended by neo-Nazis, supporters and members of the right-wing populist Alternative for Germany (AfD) party, the right-wing extremist National Democratic Party (NPD), the anti-immigrant PEGIDA movement, the Republican party, the Dortmund-based Right party, representatives of the Third Path party and the identitarian movement.

Both organizations independently identified figures who networked on social media and either mobilized, actively participated in or at least attended the far-right marches. These are several of the key figures involved: 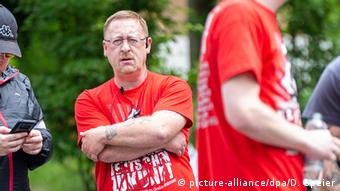 Dieter Riefling mobilized Twitter users to attend Köthen's mourning march, urging them to express their rage on the streets. Riefling hails from Lower Saxony and has close ties to Germany's so-called Kameradschaften (loosely organized groups of neo-Nazis). He used to be a member of the now-banned Free German Workers' Party (FAP) and is said to regularly attend far-right events across the country.

Tommy Frenck is a Thuringia native who has held high ranking positions in the NPD. In the 2014 Thuringia local elections, Frenck won a seat on the district assembly. He allegedly hosted Kameradschaften gatherings in his restaurant, where he served Adolf Hitler-themed schnitzel on the dictator's birthday.

Martin Kohlmann was the leader of the Pro Chemnitz voters' association, which was founded in 2009, and he spoke at their early gatherings. The group has been part of Chemnitz city council since 2014 and has, among other things, advocated introducing distinct time slots for when native Germans and refugees may use public pools. Kohlmann also acted as a lawyer for numerous right-wing figures. 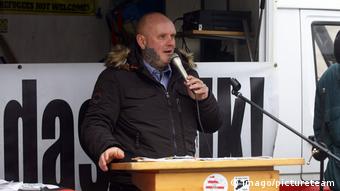 David Köckert is involved in the Thügida movement, which is closely related to the PEGIDA movement. He was a member of the NPD, and had plans to join the Republican party. During a recent march, Köckert allegedly publicly threatened that "sadness will turn to rage" and that he believed in the principle of "an eye for an eye." He has a black sun tattoo on the side of his face, which is a well-known neo-Nazi symbol.

"Suddenly, neither side seems particularly phased by that," said the Amadeu Antonio foundation's Alshater.

This blurs the line between regular citizens and far-right activists, said Hollman, adding that "now, it's not just up to state institutions to emphasize the importance of democracy, but also to each and every citizen."

The far-right Alternative for Germany party remains strong in the east, but has suffered small losses nationwide — and will not be involved in any coalition talks, as it remains a pariah for all other parties.

A former far-right AfD lawmaker is in court after allegedly calling for the overthrow of the German state. The accused was part of the storming of the steps of the Reichstag in 2020 during protests against COVID curbs.