Police registered dozens of criminal offenses and infractions at Germany's largest neo-Nazi rock concert. Opponents were disappointed that the courts did not stop the event going ahead. 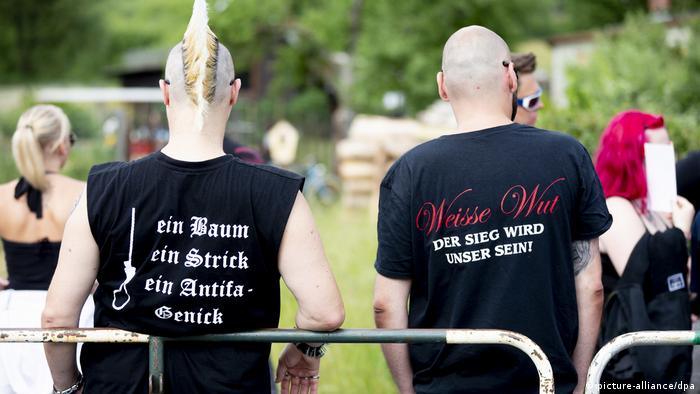 By Saturday night, police had registered 55 criminal offenses and minor infractions at the event in the town of Themar, located in Thuringia in central Germany.

In 33 cases criminal proceedings were opened for the use of anti-constitutional symbols, including the swastika and Hitler salute, which are illegal in Germany. On Friday one photojournalist was attacked.

About 300 people gathered near the rock concert grounds in protest. Politicians from the Social Democrats and the Greens were among those joining the demonstrations.

Protesters unfurled banners reading "Nazis out" and "Your ideology kills."

They also placed 20 white crosses into the ground near the rock festival site to symbolize the victims of neo-Nazi violence. Since 1990, 193 people have been killed in right-wing violence.

Many demonstrators and politicians were disappointed that the courts did not prevent the rock fest.

The courts allowed the event and even undid a strict alcohol ban.

Right-wing extremist rock concerts are often registered as political events and are therefore protected under the constitution.

Figures from the far-right National Democratic Party of Germany attended and spoke at the event.

Suspected far-right terrorist Beate Zschäpe could face life in prison for her role in the killings, but the victims' families are disappointed. They hoped the trial would offer more clarity on what really happened. (06.05.2018)