The German government will request that the Constitutional Court allow it to alter party funding laws and cut off money going to the neo-Nazi NPD. It follows two failed attempts by the government to get the party banned. 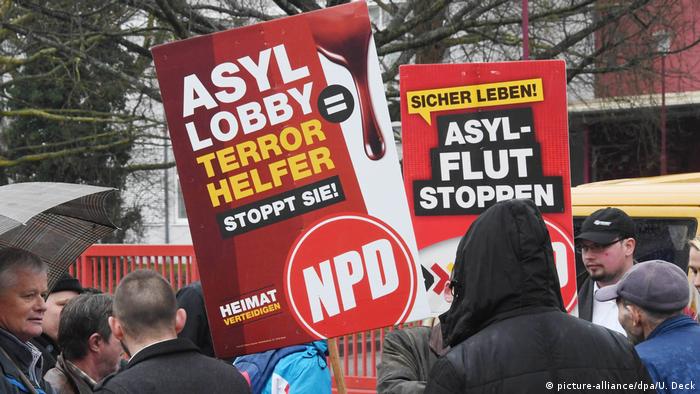 German Chancellor Angela Merkel's Cabinet on Wednesday announced it was backing a proposed change to the party financing laws that would see the extreme-right National Democratic Party (NPD) cut off from state funding for at least six years.

The proposed law would block any anti-constitutional parties from public funding, regardless of the voter share.

Read more: The decline and fall of Germany's 'neo-Nazi' NPD

The government will now present its case before Germany's Constitutional Court, which will rule whether the proposed changes are constitutional.

On the alert against right-wing extremism

The motion was sent to the Cabinet by the upper house — known as the Bundesrat and made up of representatives from all 16 states — which voted in favor of the legislative change back in February.

'Every cent is one too many'

Announcing the Cabinet's support of the motion, German Interior Minister Horst Seehofer said it was unacceptable that a party opposed to democratic principals and basic values should receive public financing.

"Cutting off funding can be one of several means with which we can fight extremism," Seehofer said, adding that the German people had every right to be outraged that they were effectively "subsidizing extremism."

Stephen Harbarth, a vice chairman of the conservative Union parties, said that "every cent the NPD receives from the state is one too many." That fact that the federal government and all 16 states backed the proposed legislation sends the "right signal," he added.

Neo-Nazi NPD takes over €1 million from the public purse

Since its founding in 1964, the NPD, which openly espouses neo-Nazi ideology, has been a stain on German post-war politics. However, under German law, all parties that capture at least 0.5 percent of the vote in the various national elections, as well as in the European elections, are entitled to receive €1 ($1.25) for every vote, as well as 50 cents for every euro raised privately.

According to the most recent figures, the NPD received around €1.1 million in federal funding in 2016.

However, the NPD only claimed 0.4 percent of the vote in last September's federal election — down from 1.3 percent — resulting in a significant cut to its funding, regardless of what the Constitutional Court finds.

The German government has for over a year been seeking to halt funding to the NPD. In January 2017 the Constitutional Court dismissed the government's case for banning the party outright, although judges did suggest there might be other legitimate methods to weaken the party.

Since then, several German states have petitioned the federal government to alter legislation that would see the NPD cut off from public funding.

The government is expected to take the case before the Constitutional Court in the coming weeks.