Federal judges in Germany have ruled against banning the far-right National Democratic Party (NPD). It is the second attempt to ban the NPD that has ended in failure. 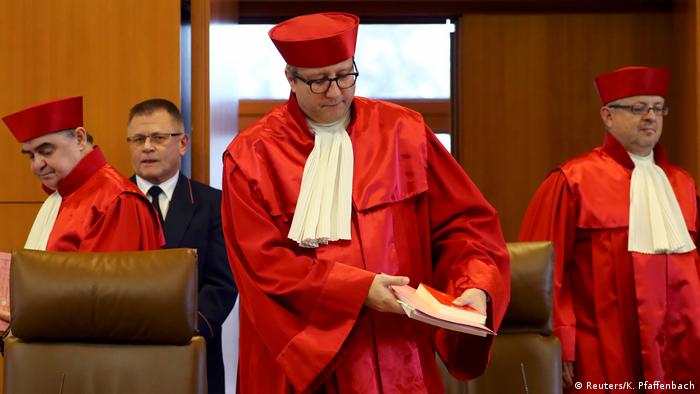 Germany's Constitutional Court on Tuesday ruled against banning the far-right National Democratic Party (NPD), whose neo-Nazi agenda was considered by many as anti-constitutional.

Although the party's attitude to the constitution has been deemed hostile, it does not have the potential to upend democracy in Germany, the court said. At the last German general election in 2013, the NPD gained 1.3 percent of the vote - well below the five percent needed to enter parliament. In more recent state elections, the NPD also dropped votes to the insurgent populist far-right party, the Alternative for Germany (AfD), and is currently not represented in any state parliament.

"The NPD pursues anti-constitutional goals but at the moment there is an insufficient weight of evidence to make it appear possible that their behavior will result in success," said the court's top judge Andreas Vosskuhle. DW's Michaela Küfner was in the courtroom:

The NPD reacted by putting a "victors" banner across its Facebook profile picture, and declaring in a post that the "National Democrats are now the only party confirmed by the highest court in Germany."

There was consternation among parts of the political establishment - particularly the regional governments represented in the upper house of Germany's parliament, the Bundesrat, who brought the motion to the Constitutional Court.

Horst Seehofer, state premier of Bavaria and head of the conservative Christian Social Union (CSU), said he regretted the court's decision, but would "of course accept it." He added that the lawsuit had been a success because the court had made clear that the NPD harbored both radical and anti-constitutional movements, and that only its growing political irrelevance made it not worth banning.

Norbert Lammert, president of the lower house of the German parliament, the Bundestag - which opposed pursuing a ban - said he felt vindicated by the ruling, despite acknowledging that the NPD was anti-constitutional. "The Federal Constitutional Court has determined with unmistakable clarity that this line has certainly been crossed by the NPD," we told DW. "But at the same time it has reminded us that banning an organization within the framework of a liberal constitution should only take place if there is a truly serious danger of it achieving its anti-constitutional aims." 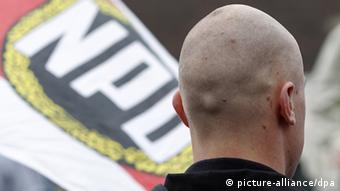 The NPD has weakened in recent years, particularly following the rise of the AfD

The center-left Social Democratic Party (SPD) also said it regretted the court's decision, but vowed to continue the fight against the far-right. "Our engagement in the fight against far-right extremism must continue," said SPD deputy parliamentary leader Eva Högl.

Members of other major parties were more philosophical. Green party spokesman Volker Beck said he understood the court's ruling. The NPD "makes a lot of effort to endanger our basic free democratic order, and is certainly an annoyance in its openly anti-constitutional attitude. But it is not a real danger to our rule of law and our democracy," he said.

Hajo Funke, political scientist and far-right specialist at Berlin's Free University, said he didn't fully agree with the court's assessment of the NPD. Despite its lack of political representation, "of course this party makes use of its limited possibilities for influence," he told DW.

The Bundesrat's argument had been that the NPD's aims were more important than its actual power - but the judges apparently disagreed. "One could have drawn different conclusions from the criteria that the constitutional court had newly taken as its basis," said Funke. "Especially if one had focused more sharply on the sociology of the everyday violence of the NPD's cadre."

For its part, the Berlin-based International Auschwitz Committee (IAK) was dismayed at the ruling. "Today is a tragic day for a strong democracy," IAK executive vice-president Christoph Heubner said, before calling the decision "outrageous and shockingly divorced from reality."

But other organizations saw Tuesday's ruling as a sign of the failure of trying to ban such parties. "It was predictable that the ban would fail, and it was a helpless reaction," said Timo Reinfrank, foundation coordinator at the Amadeu Antonio Stiftung, a Berlin-based NGO that tracks and counters neo-Nazism. "I think the NPD will now take advantage of this."

Reinfrank also thought that the attempt to ban the NPD was no more than a side-show. "I think we cling on to the NPD debate too much - it's really yesterday's conflict," he told DW. "We need to think very differently in the context of the electoral successes of right-wing populists and other small far-right parties. How do we spark enthusiasm among people for democracy again? How do we protect people affected by right-wing violence? A lot of migrants and refugees are getting intimidated every day, and the far-right scene is getting radicalized."

A previous effort to ban the party failed in 2003, when judges dismissed the case after revelations that German security services had infiltrated the party. At the time, judges said it was unclear whether the party's misdemeanors had been instigated by the party's members or by the informants who were reporting back to German authorities.

Approximately 6,000 people are thought to be members of the party, and German authorities have often accused the party of propagating a racist, anti-Semitic agenda.

The NPD has been one of the most stubborn presences on the far-right of Germany's political spectrum. Founded in 1964, it achieved its biggest success at the 1969 Bundestag election, when it took 4.3 percent of the national vote and fell just short of entering the German parliament. It still maintains a toe-hold on municipal power, with 338 local council representatives across the country (out of over 200,000 seats). The party also has one representative in the European Parliament.

Another attempt to ban the NPD has failed. That is annoying for those who sought the ban, yet it confirms the strength of the German constitution. After all, the NPD is no longer a real threat, says Volker Wagener. (17.01.2017)