Suspected far-right terrorist Beate Zschäpe could face life in prison for her role in the killings, but the victims' families are disappointed. They hoped the trial would offer more clarity on what really happened. 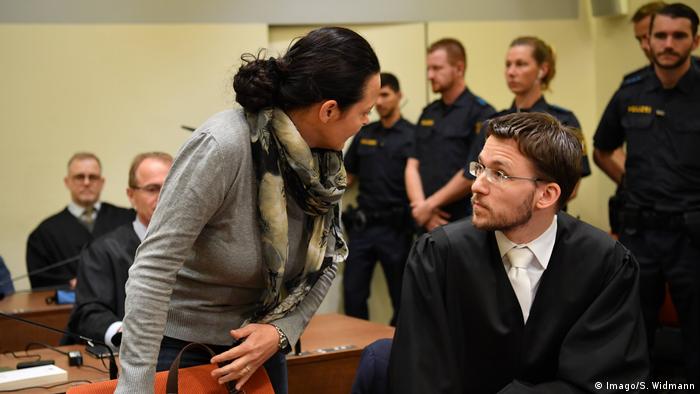 Defendant Beate Zschäpe speaks to her lawyer, Mathias Grasel, in the courtroom

Speaking at the memorial ceremony to honor the suspected victims of the far-right extremist National Socialist Underground (NSU) terrorist cell on February 23, 2012, German Chancellor Angela Merkel promised that "we will do everything to solve the murders and to bring the perpetrators and their supporters to justice." The NSU group is alleged to have murdered nine people because of their immigrant backgrounds as well as a German police officer between 2000 and 2007. The cell even boasted of its grisly crimes in macabre videos.

On November 4, 2011, Uwe Böhnhardt and Uwe Mundlos, who are suspected of having carried out the killings, were found dead of gunshot wounds in a mobile home in the state of Thuringia. At this point, the police had already been on their tail after the two committed a bank robbery. Investigators believe Böhnhardt and Mundlos committed suicide. Beate Zschäpe is the only remaining NSU member and has stood trial before Bavaria's State Court of Appeals (OLG) since May 6, 2013. Four other individuals are on trial for their suspected role as accomplices.

Now, five years later, the trial finally seems to be coming to a close. In late April, the defense attorneys made their closing arguments. Final verdicts could be made this summer. If the chief judge, Manfred Götzl, sides with the public prosecutor, Zschäpe will receive a life sentence, with early parole out of the question.

Those who survived the NSU's attacks and relatives of those who were murdered by the group insist that only this sentence will do. But even if Zschäpe is jailed for life, many remain deeply disappointed. They recall Merkel's promise of a thorough, in-depth investigation. But despite her promise, many questions still remain unanswered, says Antonia von der Behrens, a lawyer for one of Mehmet Kubaşik's sons. In 2006, Kubaşik was killed in the city of Dortmund. But his son will probably never learn why his father was singled out and murdered that day.

All co-plaintiffs are convinced that Zschäpe could have done much more to shed light on what actually happened. But she is adamant that she only learned of the killings after they happened – a claim that lawyer von der Behrens deems unconvincing. She is certain the NSU was supported by many more individuals than are facing trial today, especially in those places where the murders were carried out. "That is an important issue that should have been cleared up," von der Behrens told DW.

These and many other closing arguments by other co-plaintiffs have now been collated and published in the book "Kein Schlusswort" ("No Closing Arguments"). The book includes the statements made by Kubaşik's daughter, Gamze, and his mother, Elif. They were among several statements made by relatives appealing to the defendant's conscience – but to no avail. Zschäpe has refused to answer any questions posed by co-plaintiffs; the only time she broke her silence was when her lawyer read out a statement on her behalf in 2015.

Several parliamentary inquiry committees were also established to shed light on the NSU's crimes, the last of which was headed in the Bundestag by Clemens Binninger of Germany's Christian Democrats (CDU). But open questions still remain. Binninger, who now no longer holds a seat in parliament, doubts the NSU was made up of only Beate Zschäpe, Uwe Böhnhardt and Uwe Mundlos, as the public prosecutor believes. "Though the three were acting as a trio, did just the two men commit these crimes without ever leaving any traces?" Binninger said in an interview with DW.

Binninger, a policeman by training, wonders who had the "final say" in deciding where to strike and whom to attack. After all, the terror cell's crimes were committed across Germany, in the cities of Rostock, Hamburg, Dortmund, Kassel, Nuremberg, Munich and Heilbronn. Despite all these open questions, Binninger hopes the co-plaintiffs have not lost faith in Germany's legal system.

Binninger's inquiry committee concluded its work in 2017. During this time, parliamentarians from all the parties then represented in the Bundestag met those who survived NSU attacks and relatives of those who were murdered by the extremists. Yet that has done little to boost their hopes that someday all details will come to light. The Kubaşik family, represented by von der Behrens, is disillusioned. They, like many other co-plaintiffs, bemoan what the lawyer calls "institutional racism." By which she means the biased police investigations that assumed the murders were linked to drug trafficking or gang-related crime and which focused solely on the victims' immediate environment.

Von der Behrens' conclusion is critical also because she thinks there was "no political willingness" to shed light on the role of Germany's domestic security agency. Which would contradict Chancellor Angela Merkel's promise to "do everything to solve the murders and to bring the perpetrators and their supporters to justice." Antonia von der Behrens says that in this light, the NSU trial is "a failure."

A German court has charged a lawyer over €200,000 in expenses after it emerged that his client, a neo-Nazi terrorist bomb victim, never existed. But the lawyer claims he himself was duped. How could he not know? (21.11.2017)