In 2017, an exhibition in Berlin named "Bloody soil. Scenes of NSU crimes" zoomed in on the locations of the right-wing murders. DW spoke with photographer Regina Schmeken and found out how the project impacted her.

The surviving member of the neo-Nazi terrorist group the National Socialist Underground (NSU), Beate Zschäpe, was given a life sentence on Wednesday for the murder of ten people — mostly from immigrant communities — over a seven year period.

At the beginning of 2013, the renowned photographer Regina Schmeken started taking pictures of the sites where the crimes took place. They were published as a photo album.

Last year, the black-and-white photos of the series "Bloody soil. Scenes of NSU crimes" were put on show at the Martin-Gropius-Bau museum in Berlin. She spoke to DW about why she chose to feature these crimes.

DW: The NSU trial has been very prominent in the media again recently. Do you think that the end of the trial will offer some sort of closure, especially for the victims? 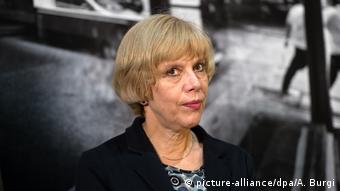 Regina Schmeken: That's a difficult question. The exhibition closes with a depiction of the door to the court. This door, which is quite shabby, offers a strong metaphor. The defendant went through it. Everyone is waiting for something to open up there. The question is now: Will we get some insight into the truth?

The victims were all people who had a very positive connection to Germany. When you see the exhibition, you realize they were murdered in completely normal locations. Why were specifically those people shot there? This arbitrariness is a heavy burden on the victims' families. They hope for this relief you mention, to have some light shed on what happened.

What initially drove you to go to the sites of the crimes?

It started out as an assignment for the Süddeutsche Zeitung newspaper. My colleague Annette Ramelsberger asked me to visit all the crime scenes before the beginning of the trial to photograph them. I immediately knew this was something important. I then found it all so eerie that I turned it into a personal project.

It was a risk. I thought, hopefully it will not lead to something kitschy or to some false pathos. I didn't have any contact with the victims and their families. I was afraid this could turn into something embarrassing. But now I'm comfortable with it. In Dresden [where the exhibition was previously shown], the son of the first victim was there and told me that he found the exhibition good because his father and the other victims would not be forgotten. The exhibition has turned into a form of memorial.

Your exhibition is called "Bloody soil. Scenes of NSU crimes." The title offers a reference to the Nazis' Blood and Soil ideology, which focuses on ethnicity. Was the connection between the terrorists and the Nazis' ideology something you wanted to underline?

And clearly, this ideology is part of the belief that foreigners do not belong here because they were not born here and because they're bringing influences that aren't German. That unfortunately fits very well with the Blood and Soil ideology.

Read more: Can you 'de-radicalize' a right-wing community?

Your photos of the crime sites do not show any of the perpetrators nor the victims. Was that a challenge or rather a condition for what you intended to do?

It was a big challenge to go somewhere where there's nothing left to see. I showed up at the locations of the crimes years after the events. The people who were there at the time were gone. In some cases, other people had moved in. Some locations remained empty. To photograph a vacant lot in a way that could be interesting for others is not very easy.

How did this project impact your perception of the crimes?

It drew me closer to the victims' families and the people with an immigration background here. It engaged me in the case. What particularly depresses me is that we actually don't want to take such a close look at the crimes. [Before working on the project] I did find it all terrible, but I didn't really want to know. And then I had to deal with it very intensively.

Read more: NSU murders: We can't look the other way

Recently in Cottbus, a young Egyptian student was hit by a car. And after that happened, she was yelled at by people saying it was her own fault. As a foreigner, she shouldn't have been there in the first place. She later died from the injury. That is really difficult to bear. Society cannot look away. We need to do something against such plagues.

The exhibition "Bloody soil. Scenes of NSU crimes" at the Martin-Gropius-Bau in Berlin features Regina Schmeken's photos of sites of right-wing terrorism. Everyday life has returned, but the victims are not forgotten. (28.07.2017)