Russians took to the streets over the weekend protesting Kremlin plans to erect an "online Iron Curtain" that would divide the internet. If it happens, it will set the country back decades, warns DW's Juri Rescheto. 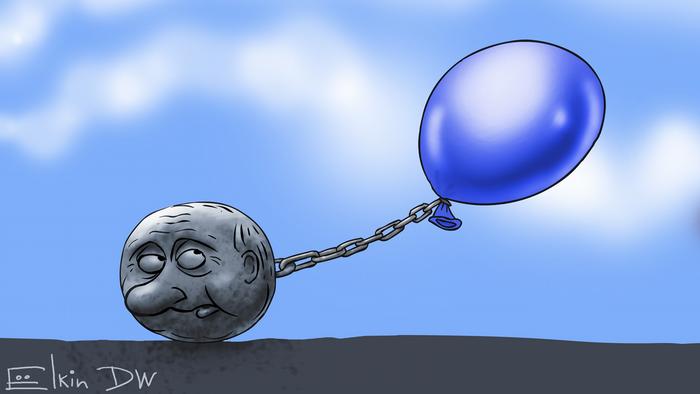 Thick cigarette smoke, monotonous voices: News from the production line, politburo announcements, the weather — these are my childhood memories. Black and white, dark, analog. I was born in the USSR.

Like millions of Soviet citizens, my father would sit in the living room, smoking and waiting for the nightly evening film that would follow the daily news broadcast, Vremya ("Time").

The clouds of smoke in the living room have disappeared, and my father, like millions of Russians, no longer smokes. But Vremya has remained on the air.

While the news from the production line and the political announcements today are somewhat more modern, more colorful, more lively, the content is the same almost every day: one-third President Vladimir Putin, one-third Prime Minister Dmitry Medvedev, one third 'the evil West.' If that's too dull, then you can turn to the internet. But that could soon be over.

Russia is 'defending itself'

The Duma has decided: Russia is defending itself! Against whom? The Americans, of course — who else? Most of the big internet servers are located in the US, and the Americans — evil as they are — could simply cut off Russia from the world wide web. So Russia must have its own internet independent of the US, according to certain voices in the Duma.

Critics, however, say that authorities are actually planning to ban internet freedoms and institute total surveillance in order to silence their anti-corruption opponents and all those who disagree with them.

Up to 15,000 people took to Moscow's streets this weekend — the biggest protests in recent years, according to organizers. They were even bigger than the huge demonstrations that took place last year against the pension reform — a strong sign that people do not want the internet to turn out like Vremya, with its meticulously crafted state announcements and other various Kremlin propaganda, nicely packaged and free from anything unsavory — in other words, highly censored.

So is a "Russian internet" even technically viable? Highly unlikely, according to experts who point to the outcome of the enormous technical and financial effort authorities recently made to ban the messenger service Telegram.

Millions of users, thousands of companies, and even state services that regularly used Telegram suffered. But it was mostly all for naught, as the encrypted messaging app still works within Russia. But key takeaway is that this is an attempt to go back to the days of "sovok" — the Soviet way — but now, rather than division by the geopolitical Iron Curtain, it's dividing the online world.

What a paradox! Russia, with its highly developed IT industry, is considered one of the most advanced countries in the digital sector worldwide. Moscow has become a real "smart city": Even in the subway, 80 meters (262 feet) underground, people can do their banking and organize doctor's appointments in a matter of seconds, thanks to strong and free wifi.

Russia has one of the cheapest mobile internet infrastructure systems worldwide; the country's startups are successfully competing with the international market. And yet now the internet there risks losing its most essential function: the free exchange of information.

Forgotten are the 1990s, the golden age of the Russian internet, when Yandex and mail.ru were born. Today, at least in Russia, they are real competitors to Google et al. Forgotten are the 2000s, when Medvedev, during his brief interlude as Russian president, relied on modern technologies, the internet and transparent government.

Today, the government instead regards the internet as an enemy. And Putin, a former secret agent, sees the internet primarily as an invention of evil US intelligence agencies that must be fought.

Now, if Putin has his way, everything will be like Vremya: Neither a reality show nor a news program — because it's not dealing with either, and its only critical reporting focuses solely on anything but Russia.

Instagram has removed posts related to Alexei Navalny's accounts of a meeting between a Russian deputy prime minister and billionaire tycoon. Russia's communications watchdog also blocked access to his website. (16.02.2018)

We take a look back at Russian punk provocateurs Pussy Riot and their remarkable defiance of political persecution and nationalist ideology in Russia. (17.07.2018)