Opinion: Carles Puigdemont decision is a devastating precedent for Europe

Catalonian ex-president Carles Puigdemont is free. A German court has rejected charges of high treason as grounds for his extradition to Spain — a disastrous judgement, says Christoph Hasselbach. 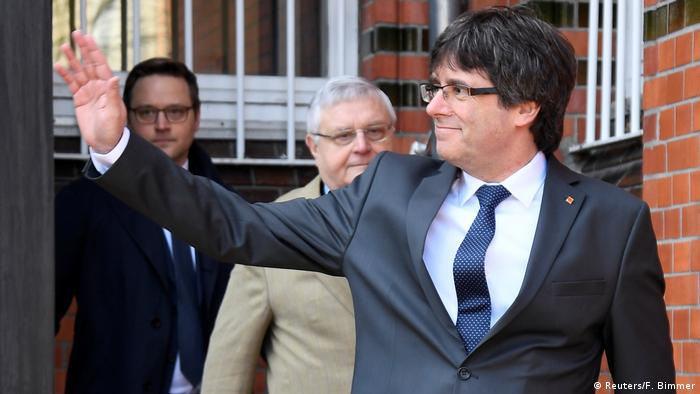 Higher regional court judges in the state of Schleswig-Holstein justified their verdict by pointing out that Puigdemont could not be found guilty of high treason as it is defined in Germany's criminal code, because he did not use violence.

What exactly did Puigdemont do? He organized a controversial referendum on Catalan independence last October, although the Spanish justice system had declared it illegal to do so. Spain's post-Franco constitution does not provide for secession.

That constitution, it should be emphasized, was also signed by the autonomous region of Catalonia. When the October 2017 referendum took place, 90 percent voted for independence — although only 42 percent of eligible voters cast ballots. Undaunted, the regional government unilaterally declared independence.

Read more: Who is Carles Puigdemont?

The judges in Schleswig-Holstein claimed that Puigdemont's actions "would not be punishable by law in the Federal Republic of Germany."

To all of the separatists in hiding across Germany: Stand up! Follow Puigdemont's example! Fight for an independent Bavaria, Hamburg or even your own Sorbian state! You have nothing to fear from Germany's justice system.

And you, separatists from other parts of Europe— from South Tyrol, Corsica or wherever you may be — give it a try! If something goes wrong, just get to Germany, it is your safe harbor!

The most devastating effect of the verdict is that it will destroy cross-border cooperation within Europe. Spain's request for Puigdemont's extradition was based on a European arrest warrant. That particular instrument is the result of years of negotiations.

When implementing a European arrest warrant, the country carrying out the request generally refrains from analyzing the legal basis for the request. Cooperation can only function as long as EU states recognize one another as operating under the rule of law. German judges have now shaken that trust.

German judges tie the hands of the Spanish justice system

As far as European law is concerned, another consequence of the decision will also weigh heavily on Spanish-German relations: By basing its judgement on suspicion of misusing state funds rather than high treason, the higher regional court has tied the hands of Spain's justice department should it eventually catch Puigdemont.

Even if he had been arrested in Spain, Puigdemont could only be tried on the lesser charge rather than on that of treason, which carries a mandatory sentence of 25 years in prison. Thus, whether intended or not, German judges have created a legal precedent in a wholly internal Spanish matter.

Although the German government has rightly refrained from commenting on the Schleswig-Holstein decision, one party has voiced jubilation: the opposition Left party. The Left has styled Puigdemont as a victim of political persecution throughout the course of his ordeal.

The Left, of all parties!

The impetus for Catalonia's separatism was never cultural self-determination — that has been guaranteed throughout the forty years that have passed since Franco's death. The main motivation for independence is that the wealthy region of Catalonia wants to keep that wealth to itself rather than supporting Spain's poorer regions — as happened in Germany after reunification.

The fact that the Left, of all parties, should cheer such a lack of solidarity is a historical irony worthy of contemplation.

Opinion: #MeTooInceste — A blind spot, not just in France 4h ago

Opinion: Protests in Tunisia come with a bitter taste 5h ago