Berlin's top diplomat has joined Russia, Iran and China in condemning the Trump adminstration's plans to expand its nuclear capabilities. He warned that "the spiral of a new nuclear arms race is already underway." 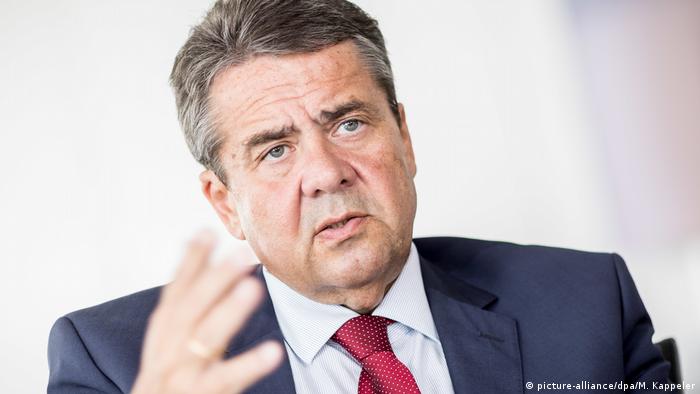 Germany's top diplomat Sigmar Gabriel joined a chorus of condemnation on Sunday after the US proposed upgrading and expanding its nuclear arsenal.

Gabriel said it was now up to Europe to take the lead in pushing for worldwide nuclear disarmament.

"As in the times of the Cold War, we in Europe are especially endangered" by "a renewed nuclear arms race", he said. "That is precisely why we in Europe must begin new initiatives for arms control and disarmament."

The German foreign minister's comments came in response to the Pentagon's "Nuclear Posture Review" that on Friday outlined the Trump administration's new military and nuclear strategy. The document called for a "tailored and flexible" approach to deterrence and an increase to the US' nuclear capabilities.

The Pentagon also classified Russia and China as the biggest threats facing the US.

Gabriel admitted that Russia's annexation of Crimea from Ukraine had led to a "dramatic loss of trust towards Russia" in both Europe and the US. "Signs that Russia is re-arming, not only conventionally but with nuclear weapons, are obvious," he added.

But instead of developing new weapons, Germany's top diplomat said Berlin would press "with its allies and partners" for further global disarmament and for "existing arms control treaties to be upheld unconditionally."

US nuclear weapons have for decades been a divisive issue in German politics. While Berlin does not have its own nuclear program, Washington has continued to keep around 20 nuclear warheads, as well as a major troop presence in Germany since the end of the Cold War.

German Social Democrat leader Martin Schulz, a failed challenger to Chancellor Angela Merkel in last September's federal elections, called during the campaign for all remaining American bombs to be removed from Germany.

Gabriel's response to the US' nuclear proposal came on the heels of a series of rebukes from several countries, including those singled out in the Pentagon's report.

China's Defense Ministry said it was "firmly opposed" to the Trump administration's proposed nuclear strategy, dismissing it as being based on pure speculation about Beijing's defense and military priorities.

Head of anti-nuclear group: 'It is depressing to see these daily threats of mass destruction'

"We hope that the US will set aside its Cold War mentality, take responsibility for nuclear disarmament and fairly judge China's national defense and military developments," Defense Ministry spokesman Ren Guoqiang said.

Iranian President Hassan Rouhani also decried the Pentagon's proposed policies on Sunday and accused Trump of hypocrisy in opposing Iran's missile program. "How can someone talk about world peace while at the same time also talk about new nuclear weapons and threaten their main enemies?" he said.

Zarif also said that the strategy violated the international Nuclear Non-Proliferation Treaty (NPT) — a 1970 pact signed by almost all countries, including the US, which calls on nations to halt the nuclear arms race and undertake measures towards nuclear disarmament.

"The US Nuclear Posture Review reflects greater reliance on nukes in violation of the #NPT, bringing humankind closer to annihilation," Zarif said on Twitter.

On Saturday, Russia slammed the US proposal, calling it "bellicose" and "anti-Russian," before vowing it would respond in order to ensure its own security.