'Time is not in Russia's favor'

As worries linger over Donald Trump’s relationship with Russia and his commitment to partners abroad, is the US still a dependable ally? Conflict Zone meets the US Army’s top general in Europe, Ben Hodges.

Having run an election campaign which openly questioned the value of the United States' longstanding alliances, Donald Trump's administration continues to face doubts about Washington's own reliability as an international partner.

Senior figures in Trump's own Republican party have voiced concern about him as a potential danger in the world. In October, Chairman of the US Senate Foreign Relations Committee, Bob Corker, went so far as to say that the US President could put the country "on the path to World War III". 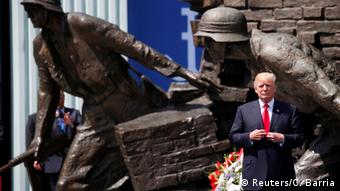 Having called NATO "obsolete" during his election campaign, Donald Trump affirmed the US's commitment to Article 5 at a speech in Warsaw in July

This week's guest on Conflict Zone is Lt. Gen. Ben Hodges, commanding general of US Army Europe and leader of over 30,000 soldiers on the continent. Does Hodges agree with the concerns about his Commander-in-Chief?

"I think that [President Trump] has done everything that the previous administration said it was going to do. The President, this administration, has lived up to every commitment as far as the alliance [NATO] goes and that's what I'm focused on," Hodges told DW’s Michel Friedman.

But Donald Trump's own words – and particularly his attacks on Twitter aimed at targets varying from sports figures and TV personalities to fellow Republicans such as Corker himself – remain a focus for his enemies and supporters alike.

Hodges, the US Army’s most senior general in Europe, insists the focus should be elsewhere, telling the German newspaper, FAZ, in September that the US should not be judged by Trump's tweets. Did this comment reveal the general's own concerns over the content of Trump's online outbursts?

"It's important to watch what the United States does. And when the United States is serious about something we put soldiers on it. We put money on it. That's exactly what's happening here in Europe," said Hodges, who also says he doesn’t tweet or follow Twitter.

But if the president is tweeting on foreign policy and military issues, shouldn't Hodges know about it?

"I get my orders through a military chain of command and of course the President is our Commander-in-Chief. But [Twitter] is not how we issue orders."

According to Hodges, European allies are now looking at what the US is doing, if they weren’t before. 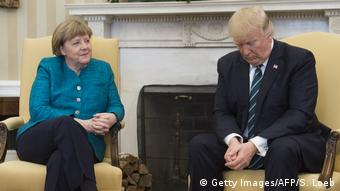 Angela Merkel and Donald Trump had an uncomfortable first meeting at the White House in March. Following a difficult meeting between G7 leaders in May, Merkel said: "The times when we could fully rely on others have passed us by a little bit."

"I hear almost zero concern from any of our allies anymore about 'is the United States committed in Europe?' because they see what we are doing and that's the manifestation of US policy is what we're doing," Hodges told Conflict Zone.

In an interview in July, Hodges expressed concern at the administration's slow pace of appointing ambassadors – whose job it is to express this commitment – saying that it "hurt" not to have them, but didn't regard this as a problem unique to the Trump administration.

Is Trump soft on Russia?

What is unique to Trump's administration is the concern over its relationship with Russia. Did Hodges believe that the President was too soft on Russia?

"Watch what we do," the commander told DW, pointing out increased resources authorised by the President and an additional one billion dollars for the European Deterrence Initiative from the previous administration. "More exercises, more capability, more available funding: that's what I look at. And to me that is a powerful, strong manifestation of commitment."

For Hodges, it was a necessary change from a "near unilateral disarmament" which had "invited attack": "We're having to undo several years of decisions that were made and made on the best judgments at the time when we thought Russia was going to be our partner. […] Now, with Russia's aggressive behaviour everybody realizes that Russia only respects strength. So you have to bring back capability." 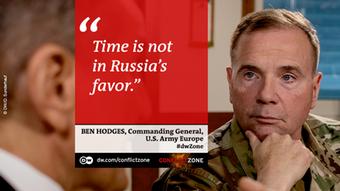 On the crisis in Ukraine, Lt. Gen. Hodges insisted that the US and its allies were committed for the long term, as they had been in Germany throughout the Cold War.

"I think the West has shown that we are willing to do what it takes to protect sovereignty and to protect democracy. […] I'm actually optimistic if we can all stick together. You know, time is not in Russia's favor," said Hodges.

The US has approved the $10.5 billion sale of a Patriot anti-missile system to NATO ally Poland. Eastern European NATO states have been ramping up their military capabilities in the face of perceived Russian aggression. (18.11.2017)

The presidents of Russia and the US spoke about the situation in Syria and a coordination of anti-terror efforts in a call that lasted for over an hour. Also on the agenda were the conflict in Ukraine and North Korea. (22.11.2017)

US President Donald Trump in war of words with Republican senators

In a surprise move, Arizona Senator Jeff Flake has said he will not run for re-election, citing "outrageous and undignified" behavior from the White House. Earlier, Senator Bob Corker called Trump "utterly untruthful." (24.10.2017)