Iran's foreign minister says Iran's agreement to the nuclear deal depends on "full compliance from the US," following talks in Brussels. The talks took place ahead of the United States' sanctions decision due Friday. 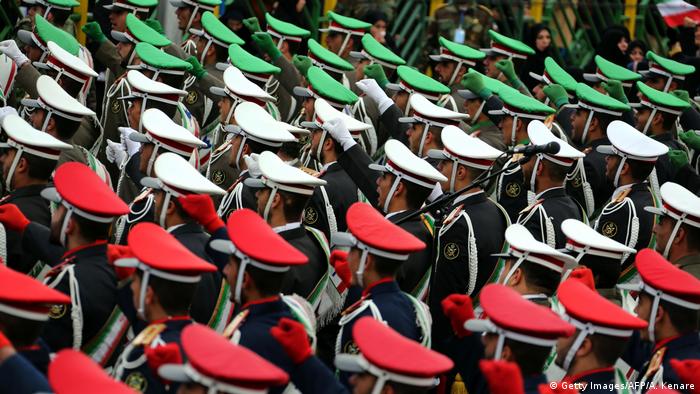 Britain, France, Germany and the European Union called for the United States to uphold the Iran nuclear deal on Thursday, following a meeting with Iranian Foreign Minister Javad Zarif and his German, French and British counterparts, before the United States makes a decision on sanctions tomorrow.

After the meeting, Zarif said Iran's promise to curb its nuclear program under the deal signed with six world powers was "conditioned on full compliance" from the US.

EU foreign policy chief Federica Mogherini said the unity of the international community was essential to preserving the Iran nuclear agreement. She said the deal "was working" and "delivering on its main goal, which means keeping the Iranian nuclear program in check and under close surveillance."

Despite EU support for the nuclear deal, French Foreign Minister Jean-Yves Le Drian said Europe was not seeking to hide other issues with Iran, including its ballistic weapons program. He called on all parties to uphold the agreement, emphasizing that "our American allies should respect it as well. There is no particular reason for any rupture."

US President Donald Trump will decide on Friday whether to renew his country's waiver on nuclear-related sanctions, as well as make a decision on Saturday regarding renewing his certification of the 2015 Iran deal.

British Foreign Minister Boris Johnson said that no better option had been put forward to prevent Iran from constructing nuclear weapons. "I don't think anybody has so far produced a better alternative ... as a way of preventing the Iranians from going ahead with the acquisition of their military nuclear capability," he said.

Read more: Iran: We will stick to nuclear deal if Europe does

Trump has repeatedly called into question the 2015 nuclear deal and described it as "one of the worst" transactions ever entered into by the US. This criticism was redoubled amid rare street protests in several Iranian cities in recent weeks.

Senior officials told AFP they expect Trump to extend waivers on sanctions against Iran on Friday to keep the US in line with the 2015 deal.

Meanwhile, the European Union has pushed for continued implementation of the nuclear deal, which aims to prevent Iran from constructing nuclear weapons in return for the lifting of sanctions.

Ahead of the meeting on Thursday, German Foreign Minister Sigmar Gabriel described the accord as one of the "core elements of global [nuclear] non-proliferation" efforts. He said that Berlin wanted to work with its EU partners to uphold and implement the deal, saying the motivation for Europe to do so was "overwhelming."

Gabriel's British counterpart, Boris Johnson, described the accord as "a crucial agreement that makes the world safer."

But Gabriel said this did not mean that there were not "serious problems separate [from the nuclear deal] that we need to seriously address."

Despite being outspoken in his criticism of US foreign policy since President Donald Trump took office a year ago, Gabriel has also said the United States was right to address concerns about Iran's strategy in the Middle East.

In October, Zarif said that Iran would adhere to the 2015 nuclear deal so long as European signatories also remained committed to the agreement.

"The resistance of the Europeans [against the US] will show whether the nuclear agreement can be carried forward or not," Zarif said.

Protests began on December 28 over economic issues, Tehran's Middle East policies and the country's religious establishment. Eighteen demonstrators were killed and up to 3,700 people have been arrested.

Critics have accused the European Union of failing to condemn Tehran's response to the recent protests quickly and unequivocally, claiming that this was a bid to avoid undermining the nuclear deal.

In a video message earlier this month, Israeli Prime Minister Benjamin Netanyahu said that "many European governments watch in silence as heroic young Iranians are beaten in the streets."

"Brave Iranians are pouring into the streets. They seek freedom. They seek justice. They seek the basic liberties that have been denied to them for decades."

Officials from the countries that signed the 2015 nuclear accord with Iran have affirmed that there have been no violations of the deal. US top diplomat Rex Tillerson has accused Iran violating the deal in spirit. (21.09.2017)