Shirin Ebadi on Iran protests: ′Government cannot silence the hungry forever′ | Asia | An in-depth look at news from across the continent | DW | 05.01.2018

Anti-government protests in Iran have grabbed global headlines over the past several days. In a DW interview, Nobel laureate Shirin Ebadi urges Iranians to pressure Tehran to hold a referendum on their political future. 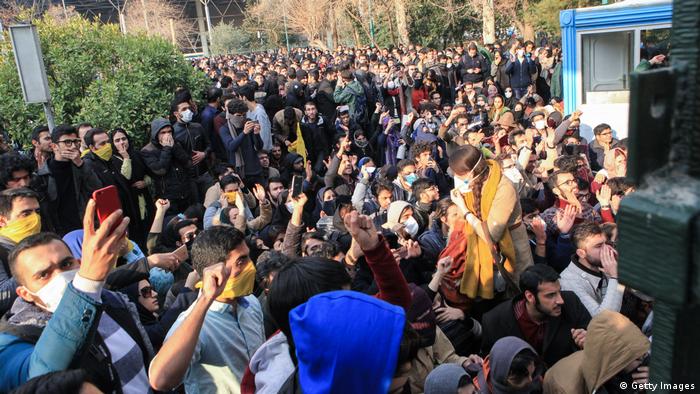 The unrest in Iran in recent days has turned the world's attention to the state of affairs in the Islamic theocracy. At least 21 people have died and hundreds have been arrested since December 28, as protests over economic woes turned into anger against the regime, with attacks on government buildings and police stations.

Iran's political establishment has closed ranks against the unrest, with even reformists condemning the violence. The government, and above all Supreme Leader Ayatollah Ali Khamenei, has insisted that the protests are being orchestrated from outside the country.

The government has reported that it has put an end to the "sedition," and Thursday saw massive pro-government marches and a very heavy police presence across the country.

Meanwhile, online messaging and photo sharing platforms Telegram and Instagram have been blocked on mobile phones, having been interrupted soon after protests began. At the request of the United States, the UN Security Council is holding an emergency meeting on Friday to discuss the wave of protests in Iran.

In an interview with DW, Iranian Nobel Peace Prize laureate Shirin Ebadi spoke about the demonstrations and the political reform process in Iran.

DW: Anti-government protests in Iran seem to have waned, due to the massive presence of security forces everywhere. Do you believe these demonstrations have the potential to turn into a major movement?

Shirin Ebadi: The presence of the Iranian people on the nation's streets is supported by the rights guaranteed to them by the constitution of Iran. According to the constitution, marches and gatherings do not require permission. But the Iranian government has always ignored the rights of the people. At the moment, because of the suppression and violence of the government, the presence of people on the streets has diminished.

But I must say that in the small towns, people are still out on the streets demonstrating. Even those that have returned to their homes will go back onto the streets again, and that time is not far away.

They will shout openly that they are idle, hungry and lacking economic prospects. The government cannot silence the hungry forever and have to listen to the people.

The vast majority of society has not joined hands with the anti-government protesters. The middle class has stayed away and remains skeptical. Why? 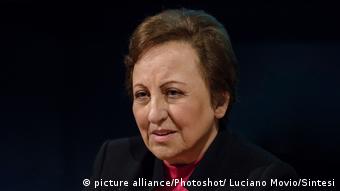 Ebadi: 'My recommendation to the people is to avoid violence, but to use their legal rights and to raise pressure on the government'

The middle class has supported the protests in their own way. But the political leadership was in the hands of neither the middle class nor the economic elites.

The elites supported the protests by publishing a statement. Human rights defenders, lawyers and writers issued statements in support of the protesters. Some artists expressed their support, too. But do not forget that the popular uprising was intense this time round, as people protesting on the streets had nothing to lose. In contrast, people who have something to lose are always more cautious. The middle class has not starved like the people coming onto the streets. But they also backed the protests.

In Iran, it appears that most people are dissatisfied about the present state of affairs, but many say they don't see an alternative to the current political set up. As a human rights activist, what in your view should be the first steps that the government has to pursue to reform the political system?

There are clear demands. The Iranian people want a referendum held freely under the auspices of the United Nations to express their demands and say what kind of government they want.

It is natural that the government did not care for the demand of a referendum until now. But people must peacefully address their demands by engaging in a civil struggle and pressuring the government to hold a vote and implement the will of the people.

My recommendation to the people is to avoid violence, but to use their legal rights and to raise pressure on the government. For example, if they have money in the bank, they should withdraw the money from the bank. Such a move would damage the economics of the state banks - and they would get to the brink of bankruptcy.

Or do not pay for water, gas, taxes and municipality services to pressure the government economically. This form of nonviolent protest is not dangerous, because no one is killed or arrested, but the government is under pressure and forced to give in to the will of the people.

Shirin Ebadi is an Iranian lawyer, a former judge and a human rights activist. For her contributions to democracy and human rights, she was awarded the Nobel Peace Prize in 2003.

The interview was conducted by Shabnam von Hein.