At least nine people have been killed in new clashes between Iran's security forces and anti-government protesters, according to Iran's state TV. Some had allegedly tried to steal weapons from a police station.

Nine people were killed in overnight clashes, including six civilians who attacked a police station in the central city of Qahdarijan and tried to take weapons, Iran's state broadcaster reported on Tuesday.

State TV, as cited by the Associated Press, said that an 11-year-old boy and a 20-year-old man died in the town of Khomeinishahr, in Iran's central Isfahan province.

A member of Iran's paramilitary Revolutionary Guard was also reportedly gunned down in the city of Najafabad, also located in Isfahan. There had initially been some confusion about the guard's death after reports that a policeman had been killed in the same town.

Read more: The genie is out of the bottle in Iran 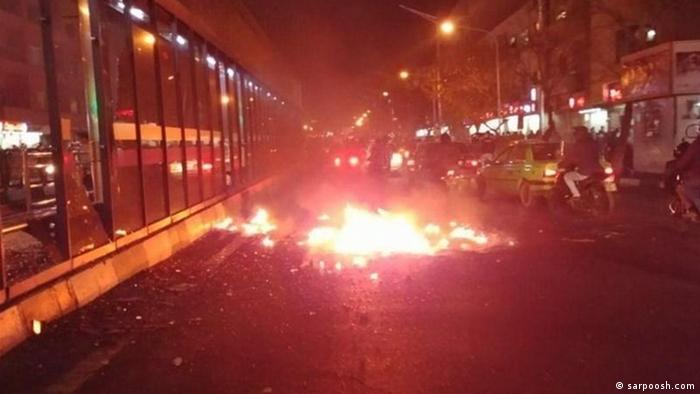 Protests in some areas of Iran have turned violent

The latest deaths come amid country-wide protests that started December 26 following a hike in food prices. At least 12 people were reportedly killed before the latest clashes, putting the total death toll at 21.

Some 450 people have been arrested in the last three days in the capital, Tehran, according to Iran's semi-official ILNA agency. The agency quoted Ali Asghar Nasserbakht, a security deputy governor of Tehran, as saying that 200 protesters had been taken into custody on Saturday, 150 on Sunday and 100 on Monday.

"We feel the situation in Tehran is more calm than previous days. Already yesterday, it was calmer than before," Nasserbakht said.

Protests in the Iranian capital were however reported to be smaller than demonstrations in other parts of the country.

Authorities have blocked Instagram and the popular Telegram, a popular messaging app, after it refused to shut down protesting channels.

Iran's Supreme Leader Ayatollah Ali Khamenei has blamed outside forces for the unrest, writing on Twitter: "In recent days, enemies of Iran used different tools including cash, weapons, politics and intelligence apparatus to create troubles for the Islamic Republic."

Khamenei also said that he would address the nation about the recent events "when the time is right."

The secretary of the Supreme National Security Council, Ali Shamkhani, named the United States, Britain and Saudi Arabia as among those countries allegedly in favor of the riots.

The Turkish Foreign Ministry said it "hoped" that there would be no foreign intervention in Iran.

"Turkey is concerned by news the protests in Iran ... are spreading, causing casualties and also the fact that some public buildings were damaged," it said, adding, "we hope that peace is ensured and common sense prevails so that the events do not escalate"

US President Donald Trump wrote on Twitter that Iranians were "finally acting against the brutal and corrupt Iranian regime" and that the US was "watching" the situation.

Trump had previously voiced his support for the protests, saying that the Iranian people were "hungry for food & for freedom."

Iran's Foreign Ministry spokesman Bahram Ghasemi said the US president should focus on "homeless and hungry people" in his own country rather than insulting Iranians.

"Instead of wasting his time sending useless and insulting tweets regarding other countries, he would be better off seeing to the domestic issues of his own country such as daily killings of dozens of people ... and the existence of millions of homeless and hungry people."

Iran's economic performance has improved since the country signed a landmark deal over its nuclear program in 2015 that lifted severe international sanctions. But the gains have so far failed to reach many Iranians, a problem protesters have criticized.

Demonstrators have also railed against widespread government corruption and the country's involvement in regional conflicts, including Tehran's financial and military support for Syrian President Bashar Assad.

Frustrated Iranians take to the streets in anti-government protests

The mass protests in Iran were initially about economyic woes and foreign policy. Now, demonstrators are questioning the country's system of government. Ayatollah Ali Khamenei is blaming the "enemies of Iran." (02.01.2018)

The Iranian regime continues its violent crackdown on protests after the death of 22-year-old Jina Mahsa Amini in police custody. Thousands of people demonstrated again in countries around the world over the weekend.