The EU's top diplomat says the US can't terminate the Iran nuclear agreement because it's not a "bilateral deal." European leaders acknowledge Iran poses many problems, but insist they should be handled separately. 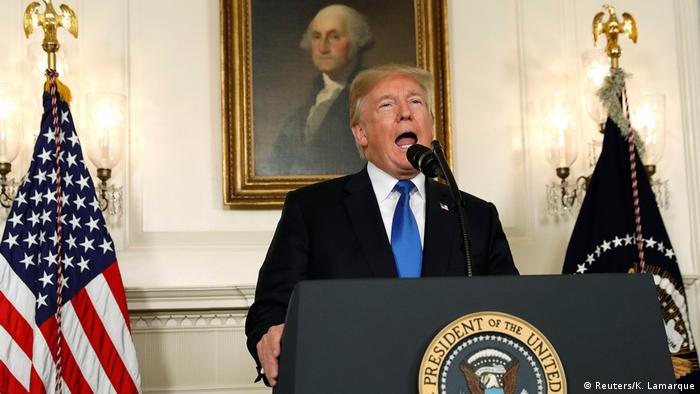 European diplomats on both sides of the Atlantic, along with the Iran nuclear deal's other signatories and many of the US president's own advisers, have failed to convince Donald Trump not to pick apart the agreement.

In Brussels, European Union officials are clearly exasperated with the US leader's insistence on mixing a myriad of complaints about Iranian behavior with the Joint Comprehensive Plan of Action (JCPOA), the six-party accord signed in 2015 which limits Tehran's ability to enrich uranium to a weapons-grade level.

EU Foreign Policy Chief Federica Mogherini did not mince words Friday when lambasting Trump's decision not to certify Iran's compliance, which she says has been full, and to ask the US Congress to examine ways to add sanctions on Tehran. Mogherini was officially the deal's mediator when it was concluded in 2015.

"This deal is not a bilateral agreement, this is not an international treaty," but part of a UN Security Council Resolution, she said tersely after the announcement, "so it is clearly not in the hands of any president of any country in the world to terminate an agreement of this sort."

"The president of the United States has many powers, but not this one," she added. 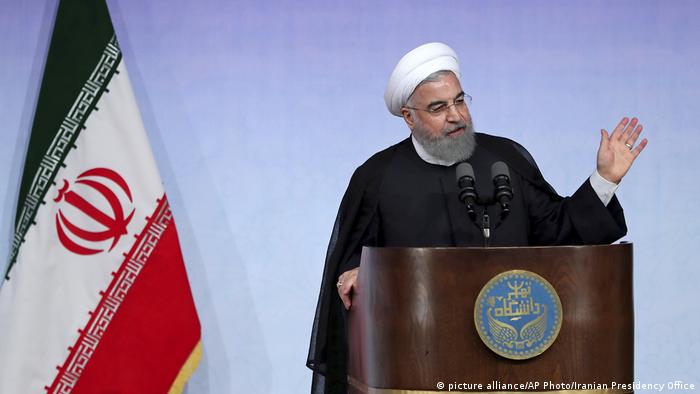 Iranian President Hassan Rouhani later echoed Mogherini in a live televised address. "No president can revoke an international deal. ... Iran will continue to honor its commitments under the deal," Rouhani said. He also warned that "if one day our interests are not served, we will not hesitate even one moment and will respond."

Chancellor Angela Merkel, President Emmanuel Macron and Prime Minister Theresa May said in a joint statement: "We encourage the US Administration and Congress to consider the implications to the security of the US and its allies before taking any steps that might undermine the JCPOA, such as re-imposing sanctions on Iran lifted under the agreement."

“We stand ready to take further appropriate measures to address these issues in close cooperation with the US and all relevant partners,” they said. ”We look to Iran to engage in constructive dialogue to stop de-stabilising actions and work towards negotiated solutions."

German Foreign Minister Sigmar Gabriel told Deutschlandfunk radio that Trump's "difficult and dangerous signal" came at a time when the US was also dealing with the North Korean nuclear threat.

"My big concern is that what is happening in Iran or with Iran from the US perspective will not remain an Iranian issue but many others in the world will consider whether they themselves should acquire nuclear weapons too, given that such agreements are being destroyed," Gabriel said.

"And then our children and grandchildren will grow up in a very dangerous world," he said.

The foreign minister argued that if the US scrapped the deal, or if sanctions were re-imposed on the Islamic country, it would give Iranian hardliners, who oppose dialogue with the West, the upper hand.

"Then they might revert to developing nuclear weapons," Gabriel said, adding that it would not be acceptable to Israel. "… we will be back where we were 10, 12 years ago with the danger of war relatively close to Europe."

Gabriel urged the Trump administration not to endanger the security of its allies and its own people.

Mogherini and other European officials insist they will continue to observe the agreement, reminding Iran it must do the same.

A high-level EU official speaking on background ahead of the announcement said the bloc agrees with Trump about the dangers of ballistic missiles, terrorism, Iranian-backed militias and what they see as other bad behavior, and believes they should be dealt with, but separately from the nuclear deal. 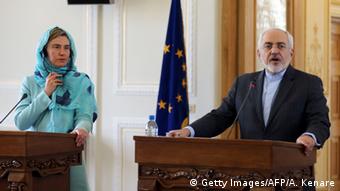 At least with the current nuclear agreement, Tehran wouldn't have the warheads for those missiles, the official pointed out.

Now lobbying attention turns to Congress, where European outreach efforts continue, according to the EU official.

"All the other issues of concern that may come up will not be better served if we undo the agreement," the official explained, "because the agreement takes away a very dangerous risk, not only the risk of a nuclear arms race in the region, but also of uncontrolled nuclear proliferation, which is something we are now unfortunately seeing in North Korea."

Lack of accord between US and EU

European Council on Foreign Relations analyst Ellie Geranmayeh says this move "has really been seen in Europe as a terrible betrayal of European allies." While Europeans are also very concerned about missile proliferation and regional meddling, they want to keep open the channel of diplomatic initiatives. "If this deal starts to unravel," she told DW, "it's more likely than not to provoke activities from Iran inside the region that add to the fragility of that region."

Erik Brattberg, who heads the Carnegie Endowment's Europe program, says that although the EU's reaction is obviously one of disappointment, the situation doesn't need to be seen as "catastrophic."

"While uncertainty about US intentions and its commitment to the JCPOA seem unavoidable in the short term," Brattberg said, "it is at least preferable to a [complete] unilateral US withdrawal from the agreement from a European perspective."

But things will get worse for European companies that have resumed doing business with Iran if Trump's impulses are fulfilled. "I think there is a very good chance that US sanctions will be reapplied against Tehran," predicts Nile Gardiner, Director of the Margaret Thatcher Center for Freedom at The Heritage Foundation, a conservative think tank in Washington. Republicans will strongly support renewing the sanctions, he said, and some Democrats may join them.

"European companies should be nervous," Gardiner told DW. "They are playing with fire by investing in Iran, and could be hit hard by US sanctions. If they wish to do business with the US they would have to comply with American sanctions if they are imposed."

Geranmayeh warns Gardiner may be right. "My message to the Europeans is, now that Trump has decertified, you better start planning on that contingency much more vigorously than before," she said, "whether it's because of a review process by Congress or because, come January, the president decides that he's not going to renew these waivers."

With EU foreign ministers meeting Monday to discuss their strategy, she says even if the EU is united behind a position of continuing the agreement, they'd better start coordinating on how far they are willing to go to salvage the deal and how to safeguard their companies from the White House if all else fails.

Shada Islam, director of policy at Friends of Europe, could only shake her head about the developments. "This was a hard-fought deal," she told DW, adding that its abolishment would be dangerous for the world. "This will empower all those in Iran who don't want the nuclear agreement – is that what we want?"