The foreign ministers of ten countries have called for fresh efforts by the international community to halt the spread of nuclear weapons and materials at a meeting in Germany. 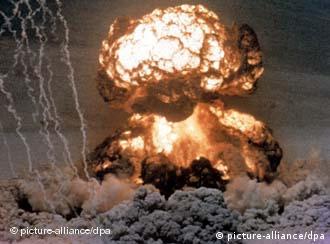 Group seeks to ban all fissile material for nuclear weapons

At talks in Berlin on Saturday, hosted by German Foreign Minister Guido Westerwelle, ten nations agreed to renew their efforts to speed up nuclear disarmament.

"We encourage all countries who may still be hesitant to follow our example," Westerwelle said.

The German foreign minister said that the participants from five continents saw themselves as the vanguard of a new global disarmament effort.

"We want to make this young decade a decade of disarmament," he said.

A joint statement released after the meeting said that the goal of the initiative was to "work toward achieving nuclear disarmament and strengthening the international non-proliferation regime."

Westerwelle told journalists that the Nuclear Non-Proliferation Treaty (NPT) and the international Nuclear Test Ban Treaty should be adopted by all countries, adding that the production and mining of all fissile material for nuclear weapons should be banned internationally. He called for resuscitating the Geneva Disarmament Convention.

Attending the talks with Germany were Japan, Canada, Australia, the Netherlands, Chile, Poland, Mexico, Turkey and the United Arab Emirates.

Last year, these countries formed the group Friends of the Non-Proliferation Treaty.

Israeli Prime Minister Netanyahu said on Saturday Israel will not take part in a UN-led conference in 2012 designed to achieving a nuclear arms-free Middle East. The plan was proposed at a UN meeting in New York. (29.05.2010)

China has defended its nuclear deal with Pakistan as peaceful. The foreign ministry spokesman's remarks came after the US announced that it had sought clarification from Beijing on the sale of two reactors to Islamabad. (17.06.2010)

German Foreign Minister Annalena Baerbock called for a "new momentum" to nuclear disarmament as she met with her Swedish counterpart with an eye toward a review of a non-proliferation treaty.