North Korea denuclearization: Can Pyongyang be trusted? | Asia | An in-depth look at news from across the continent | DW | 09.05.2018

Despite the diplomatic advances of recent weeks, there's little trust in Japan for the North Korean regime. Pyongyang is critical of Tokyo's firm stance on "maximum pressure" and is desperate for sanctions to be relaxed. 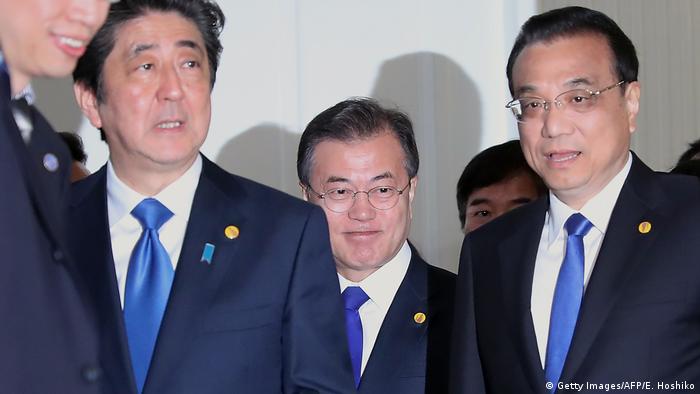 The leaders of Japan and South Korea and the Chinese premier put on a united face during talks in Tokyo on Wednesday about the future of the Korean Peninsula and North Korea's nuclear weapons program, although there is still little trust in Japan in the regime of Kim Jong Un, and a widely held belief that the recent bout of diplomatic activity will ultimately come to naught.

Prime Minister Shinzo Abe hosted Moon Jae-in, the South Korean president, and Premier Li Keqiang at the Akasaka Palace state guesthouse for a trilateral summit before bilateral talks between the three leaders in the afternoon.

The three nations have had deep political differences in recent years and the three-way meeting was the first of its kind since November 2015, underlining the regional effort to bring about the abolition of North Korea's nuclear arsenal and its ballistic missile capability.

In their communique issued at the end of the meeting, the three leaders welcomed recent developments that have — on the surface — helped to reduce tensions in the region, and vowed to continue to enforce strict sanctions on North Korea and to work together to achieve the denuclearization of the regime.

"We have to build on the momentum toward the complete denuclearization of the Korean Peninsula and peace and stability in Northeast Asia, and ensure North Korea takes concrete actions," Abe said in a press conference after the summit.

And while Japan is in step with Washington's policy of maximum pressure on the North, there are suggestions that South Korea and China are keen to take a softer stance against Pyongyang. While Tokyo and Washington insist there should be no rewards for the North — such as lifting of sanctions or economic aid — until there has been the "complete, verifiable and irreversible" destruction of Pyongyang's nuclear weapons and missiles, Beijing and Seoul appear to favor incremental rewards for each step that the North takes towards the final aim of denuclearization.

"The South is engaging with the North in a policy that I would describe as appeasement," said Yoichi Shimada, a professor of international relations at Fukui Prefectural University. "The North wants sanctions relief and that is why Kim Jong-un has now visited China for talks with Xi Jinping twice in a matter of weeks," he added.

"North Korea breaks its promises, as we have seen countless times in the past, and I see no likelihood of them keeping their word this time," Shimada said. "So that means we must keep up the maximum pressure, whether economic or military, until they do what they say they are going to do and that can be independently verified."

As well as the destruction of North Korea's nuclear program and intercontinental ballistic missile capability, Tokyo is calling for the regime to abolish its short-range missiles, which are capable of striking targets in Japan, and its stockpiles of weaponized chemical and biological agents.

And while Beijing and Seoul are on the same page on those issues, Japan is fighting a more lonely battle when it comes to demanding that North Korea account for the Japanese nationals it abducted in the 1970s and '80s to train future generations of its secret agents. The US, however, has agreed to include the fate of the abductees in its discussions with the North, with Trump giving Abe that commitment when the Japanese leader flew to Washington last month to state Japan's case.

Tokyo's inflexibility on the issue of the abductees and the commitment to the policy of maximum pressure have clearly angered Pyongyang, which has in recent days hit back through its state media.

An editorial in the Minju Joson newspaper on Tuesday declared that it is "disgusting for Japanese reactionaries to throw cold waters on the reunification fever on the Korean Peninsula, revealing their sinister nature."

"Such anachronistic, reckless behavior of the Japanese reactionaries trying to … step up the hostile policy toward the DPRK, unaware of the changing world, deserves [the] ridicule and derision of the international community," it added.

Toshimitsu Shigemura, a professor at Tokyo's Waseda University, said that Japan recognizes that it cannot be a major player on the Korean Peninsula directly because it has such little economic, political or military pressure to bring to bear against Pyongyang, but that it does have influence with the Trump administration.

"North Korea is desperate for the international sanctions to be lifted and they are trying to bring pressure to bear on Japan, which is strongly in favor of maximum economic pressure," Shigemura told DW. "Trump has listened to Abe on the issues that concern Japan and has been swayed by Japan's firm line, so it is clear why the North would want to drive a wedge between these two allies."

And Shimada is confident that Abe has no intentions of backing down in his confrontation with Kim.

"They are trying to isolate Japan, but there is no question that Trump trusts Abe and has been won over by his arguments on a number of issues that have only appeared on the agenda since they talked," he pointed out.

And instead of creating more hurdles, Shimada believes, North Korea would be better served by building bridges.

Japan's PM Abe has quickly arranged a trip to Washington to "coordinate policy" with the US president – but will Abe be forced to concede issues like security and human rights over US interests? Julian Ryall reports. (29.03.2018)

Japan's prime minister has warned that North Korea's offer of denuclearization talks with South Korea and the US could be designed to buy time. Beijing urged the US and the North to hold talks as soon as possible. (08.03.2018)