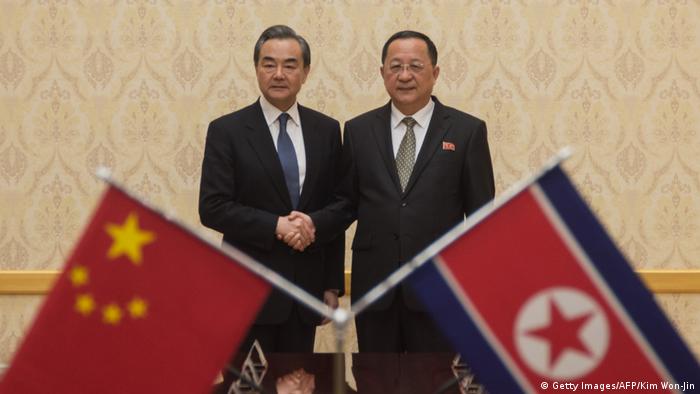 He also said that he hoped talks between the United States and the North would be "smooth and achieve substantial progress." US President Donald Trump is set to meet Kim in May or June, with denuclearization high on the agenda.

Ri said Pyongyang will "maintain close communications with China on how to realize denuclearization and establish peace mechanisms on the Korean Peninsula, while enhancing dialogue with all parties concerned," according to Xinhua.

Wang also met North Korean leader Kim Jong Un, according to a one-line statement by the Foreign Ministry on its official microblog. No further details were given.

China keen to be seen as peace broker

Wang's visit is the first of a high-ranking Chinese politician since 2007 despite China being North Korea's primary ally since the fall of the Soviet Union. China supported UN sanctions against North Korea after the North's missile and nuclear tests last year.

Beijing is now keen, however, to show it is part of a subsequent international effort to bring about peace between the two Koreas, who are still technically at war, as the 1950-53 Korean War ended in an armistice, with no peace deal signed. During last week's meeting, Kim and Moon agreed, among other things, to work towards a peace accord.

Kim had traveled to China in April, his first overseas trip since taking power in 2011, just days after the countries' foreign ministers met in China.

Wang emphasized China's role in what many hope will be a turn into a genuine peace process, saying that Beijing hopes to "continue to play a positive role in seeking a political solution to the Korean Peninsula issue."

After the historic summit of the two Korean heads of state, South Korea's nationalists are mobilizing to oppose closer ties. But, the majority of the population remains optimistic. Alexander Freund reports from Seoul. (30.04.2018)