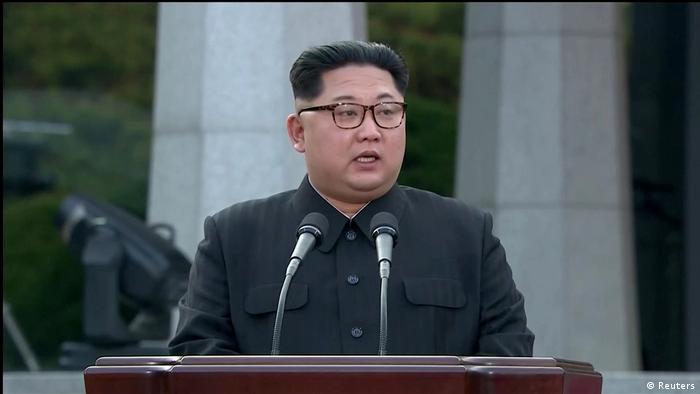 Pyongyang's state media arm reported that the leaders exchanged "honest and heartfelt talks" at the summit that "was a realization of the supreme leader's blazing love for the nation and unyielding will for self-reliance." It added that Kim's "immortal achievement will be brightly engraved in the history of the Korean nation's unification."

On Friday, Kim crossed the military demarcation line into the south side of the demilitarized zone between North and South Korea. He became the first North Korean leader to do so since fighting stopped in the Korean War between the two countries in 1953. No peace treaty has yet been signed.

In his meeting with Moon, Kim repeated past vows to denuclearize the peninsula and work towards a formal end of the war. Kim is also expected to discuss these issues with US President Donald Trump at a meeting expected in the coming weeks.

At the conclusion of the summit, the two leaders signed a Panmunjom Declaration that "confirmed the common goal of realizing, through complete denuclearization, a nuclear-free Korean peninsula."

The official Korea Central News Agency (KCNA) carried the Panmunjom Declaration in full in its report and said the encounter opened the way "for national reconciliation and unity, peace and prosperity."

Guarded optimism in the South

The conservative Chosun daily in an editorial welcomed the reparation of frozen ties between the two Koreas. But the newspaper said the summit left much to be desired in terms of denuclearization, saying the Panmunjom declaration was "one step back from what was agreed in 2005" — when the North promised to abandon the development of nuclear weapons and allow outside inspectors in for verification.

"Even if an agreement is reached on denuclearizing the North at the upcoming US-North Korea summit, it will take a while to demolish nuclear facilities, weapons and fissile materials," the Chosun editorial said. "In order to ensure the North does not backpedal on it again as it did in the past 25 years, continuous sanctions and pressure are required."

Similarly, the Joongang Daily said the agreement is "a starting point on a long journey toward denuclearization. It also points out that Kim has yet to reveal "how and when denuclearization will be accomplished."

The Korean Herald had a much more positive take on the summit, saying it had "played its role quite successfully" as "a stepping stone to the Washington-Pyongyang summit."

In China, the official China Daily on Saturday commented that while denuclearization could "usher in a new era of development," no plan for achieving the goal had been presented. "The denuclearization of the peninsula, written into the Panmunjom Declaration, is only a prospect with no specific plan," the China Daily went on. "That is because such specifics can be reached only between the US and North Korea, and South Korea has only limited authority to bargain."

After a historic summit, Kim Jong Un and Moon Jae-in have committed to achieving "a nuclear-free Korean peninsula." The two plan to meet again in May to further discuss reducing tensions. (27.04.2018)