As Kim Jong Un and Moon Jae-in held their landmark meeting, the world's attention turns to the Korean Peninsula — a region with deep historical and cultural similarities but stark ideological differences. 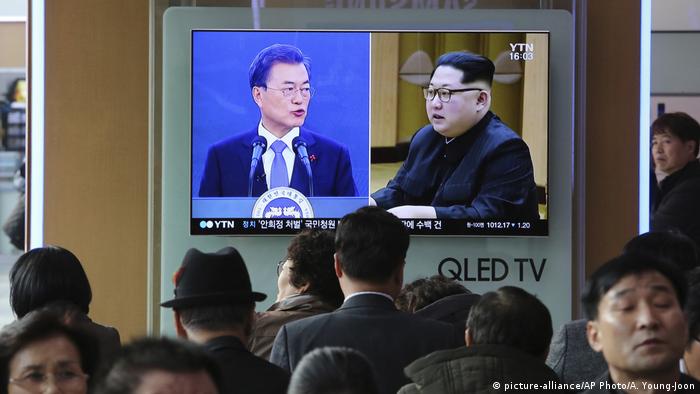 A little history — how the split happened

In the last days of World War II, when it became clear Japan would surrender to the Allied powers, the question of what would happen to Korea became louder than ever. After decades of occupying the Korean Peninsula, Japan had retreated.

The United States and Soviet Union agreed to divide Korea at the 38th parallel in August 1945, with the US taking the southern part and the Soviet Union the north.

The plan was to hand back control to the Koreans and withdraw, and in 1948 several attempts were made at getting the nations to vote for reunification.

But the distrust engendered by a few years of opposing ideologies had grown too deep. What started as an almost "accidental division" gave rise to one of the most hostile and heavily militarized borders in the world, and split one people in two.

North Korea is now a Stalinist state and is accused of holding hundreds of thousands of people — including children — in political prison camps and other detention facilities across the country. It also receives the lowest ratings when it comes to press freedom and government accountability.

Years of isolation have seriously damaged North Korea's economy, and the country's populace has long suffered from poverty and famine. The United Nations reports that over a third of the population is malnourished and many people lack access to proper healthcare.

Life in South Korea, on the other hand, is fueled by an unashamedly loud and proud style of capitalism. The country is also officially a constitutional democracy.

However, it does have its own political prisoners. South Korea's controversial National Security Law makes it an offense to express sympathies with North Korea. But South Korea ranks as far less corrupt than its northern neighbor.

And it's a key ally for Western powers — particularly the United States, which still stations around 30,000 American soldiers on South Korean soil and holds regular military drills with the South's troops.

Despite a similar geographical size, South Korea's population (over 51 million) is almost twice as large as North Korea's (more than 25 million). Due to their poor diet, North Koreans tend to be smaller than South Koreans. This is most visible among school children.

The difference in life expectancy is similarly notable: while South Koreans on average live to the ripe old age of 82, North Koreans die ten years younger at 70.

Is a Trump-Kim meeting a recipe for disaster? Or so crazy it just might work?

North and South Koreans enjoy many of the same types of food, as recipes were passed on from generation to generation long before the divide. For instance, Dduk (ricecake) and Yeot (a type of confectionary) are eaten by all students before exams and are said to bring them luck.

Cultural celebrations are similarly deeply ingrained in Korean society on both sides of the border. Some of the most important dates are New Year's Day, Thanksgiving Day and Daeboreum — the day of the year's first full-moon. New Year's Day is traditionally celebrated with a bowl of Ddukguk (rice cake soup).

Parents are also served food by their children and addressed by polite titles, regardless of where they live in Korea.

South Korea is said to have turned into the "Hollywood of the East," by "churning out entertainment that is coveted by millions of fans stretching from Japan to Indonesia." There are about 400 independent studios producing content for the entertainment market, helping South Korea to export its special brand of pop music ("K-pop"), television dramas and video games to countries across Asia.

As for North Korea's hit records...well, you just need to take a look at the charts.

Things look similarly polarized on the fashion front. North Koreans refrain from experimenting because the government strictly bans skinny jeans, mini skirts and even particular hairstyles, while their southern neighbors are free to don whatever outfit takes their fancy.

From daring mini skirts to something borrowed, something blue: weddings also look decisively different. Couples in South Korea may splurge on a beautiful dress for the bride, a glitzy ceremony and a spectacular honeymoon, while those tying the knot in North Korea tend to take a simpler approach all round, usually celebrating in a restaurant or at home.

Due to its communist worldview, the North is officially atheist. However, new movements like Cheondoism are gaining in popularity. In the South, Protestantism and Catholicism have won many new followers in past decades, their ranks swelled by Christians from North Korea who have fled persecution.

As for the modern-day "religion" of the internet, its influence is unbounded and users' access unhindered in South Korea.

In the North, only members of public and educational services are allowed to surf the World Wide Web — and then only under strict controls. One phenomenon occurring as a result is Wi-Fi tourism: North Koreans buying properties close to foreign embassies in a bid to access their Wi-Fi. Housing prices in Pyongyang have shot up as a result.

North Korea does have its own intranet, called Kwangmyong. It's not connected to the rest of the world and was primarily built to browse fan pages of the leading Kim dynasty, North Korea's ruling family.

He has carried out an unusually large number of weapons tests in an attempt to develop an effective nuclear arsenal that is capable of striking targets on the US mainland. Four of the North's six nuclear bomb tests happened during his rule.

The tests spiked tensions between Pyongyang and the international community, particularly the United States, with President Trump warning that he would respond the North's nuclear threat with "fire and fury like the world has never seen."

Following a war of words between Trump and Kim, things changed dramatically this year, with the North Korean leader sending his sister Kim Yo Jong and athletes to the Winter Olympics in the South and agreeing to hold talks with the South Korean president, Moon Jae-in.

Moon later also brokered a meeting between Kim and Trump set for May or early June.

In the lead-up to the historic summits, Kim Jong Un even announced that his country will suspend nuclear and missile tests indefinitely and shut down a nuclear test site, prompting Trump to tweet: "This is very good news for North Korea and the world - big progress! Look forward to our summit."

Korea summit 'is a great opportunity'

North Korea's "rocket man" and America's "dotard" once threatened to fire nuclear weapons at each other. Now they want to discuss peace. DW charts the major events in the Trump-Kim story. (09.03.2018)