Is the world ignoring North Korea's 'crimes against humanity'?

Rights activists have condemned a recent visit to North Korea by the Olympic Committee president as a sign that the international community is willing to overlook human rights abuses for the sake of dialogue. 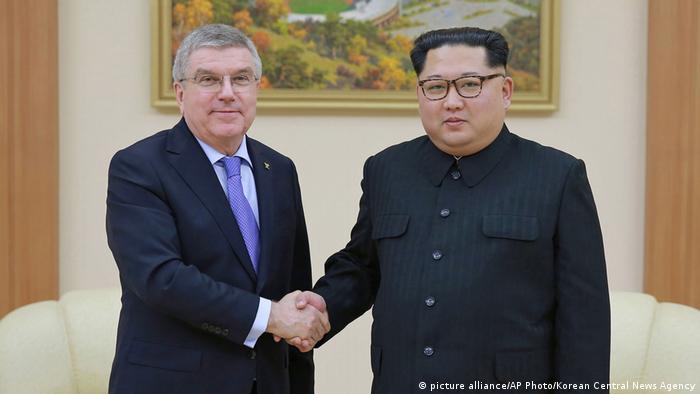 Thomas Bach held talks with Kim Jong Un, the North Korean dictator, during a three-day visit to Pyongyang from March 29, with the North's state-run media playing up their discussions.

The Korea Central News Agency reported that Kim "received" the IOC president and stated that Bach "expressed the most heartfelt thanks to the respected Chairman Kim" for permitting North Korean athletes to take part in the recent Pyeongchang Winter Olympics in South Korea and for making the games "symbolic of peace."

The report also claimed that Bach "expressed his will to make sure that the IOC would cooperate with the DPRK [North Korea]" in preparing for North Korean competitors to attend the 2020 Tokyo Olympics and the 2022 Beijing Winter Olympics.

North, South Korean officials meet to hash out logistics ahead of rare summit

North Korea wants to be in next two Olympics, says IOC chief

Ken Kato, director of Human Rights in Asia and a member of the International Coalition to Stop Crimes Against Humanity in North Korea, said an image of "Bach shaking hands with the bloodstained dictator was terrible, but what was more irritating was a photo on the website of the Rodong Sinmun, the official newspaper of the Workers' Party of Korea, of them walking together and smiling."

According to Japan's Jiji Press news service, Japan's Prime Minister Shinzo Abe phoned Bach after he left North Korea and requested that IOC chief "bear in mind the feelings of the Japanese people."

Tokyo has consistently called on Pyongyang to provide details on as many as 100 Japanese nationals, who were abducted by North Korean agents to train future generations of spies. The North in 2002 admitted abducting 13 Japanese, permitted five to return to Japan and claimed the rest had died of illness or in accidents.

Tokyo does not believe Pyongyang's claims and is calling on the international community to include the issue of its abducted citizens in any discussions with the North that could lead to sanctions on the regime being relaxed.

Kato has written to the IOC – and is awaiting a reply – claiming that by meeting Kim, Bach is "ignoring the regime's track-record of human rights violations against its own people and those from other countries."

"And that will mean that tens of thousands of men, women and children will continue to die in Kim's political prison camps and the gulags set up for anyone who utter a word against his regime, along with three generations of their families," he added.

A commission of inquiry set up by the United Nations in 2013 issued a 400-page report in February of the following year in which it identified a "wide array of crimes against humanity" orchestrated by the North Korean government. Basing its findings on first-hand testimony from victims and witnesses, the report identified "unspeakable atrocities" with a "gravity, scale and nature" that "does not have any parallel in the contemporary world."

"These crimes against humanity entail extermination, murder, enslavement, torture, imprisonment, rape, forced abortions and other sexual violence, persecution on political, religious, racial and gender grounds, the forcible transfer of populations, the enforced disappearance of persons and the inhumane act of knowingly causing prolonged starvation," the report says, adding that "Crimes against humanity are ongoing in the Democratic People's Republic of Korea because the policies, institutions and patterns of impunity that lie at their heart remain in place."

Park So-keel, director of research and strategy for the Seoul office of Liberty in North Korea, says that while any developments that reduce the likelihood of a conflict breaking out on the peninsula are positive, there is a fear that governments are willing to strike a deal with Pyongyang that will not address its human rights abuses.

"There's definitely concern that governments' short-term focus will be on security and human rights will be seen as longer-term issue and be sidelined," he told DW.

There are reports that Moon Jae-in, the South Korean president, has already ruled out human rights as a topic for discussion when he meets the North Korean leader later this month. The main issues for Seoul will be North Korea's nuclear and long-range missile capabilities. It is not clear what Pyongyang is going to demand in return for denuclearization.

"There is always the risk that the short-term political risk is going to be the most pressing matter for political leaders and many of the issues that make up the bigger picture get overlooked," said Park.

Kato is determined not to let that happen.

"If we permit this murderous regime to continue to oppress its people, what does that say about the global society?" he said. "We know this is going on. We have evidence that it is happening. I believe the people of North Korea will feel abandoned when they see Bach shaking hands with Kim."

"It would be a crime parallel to the world ignoring the fate of the Jews in Europe during World War II if we let this continue to go on," he added. "And at least back then, there was far less evidence of what was happening to the Jews than there is today about the fate of millions of North Koreans."

North Korea has remained unusually silent as US and South Korea military drills kick off. Does the Kim regime's softer tone indicate it is ready to enter negotiations over its weapons program? Julian Ryall reports. (02.04.2018)