North, South Korean officials meet to hash out logistics ahead of rare summit

Officials from North and South Korea have met to plan a landmark meeting between the two countries' leaders. One of the key issues is whether Kim Jong Un will cross the border by car or in a symbolic walk. 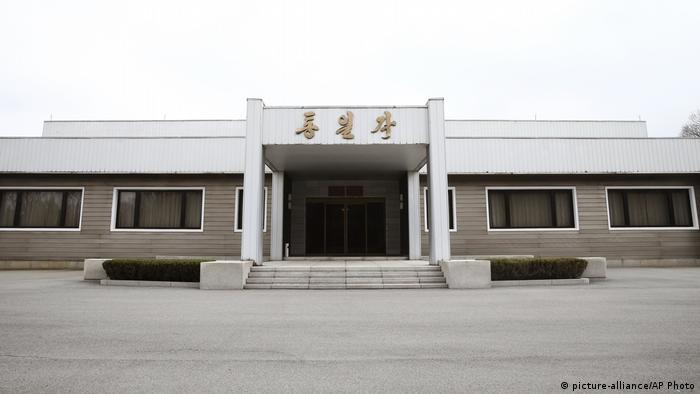 Officials from both sides of the Korean Peninsula met on Thursday to hash out logistics for a rare summit slated for April 27.

South Korean President Moon Jae-in is expected to meet with North Korean leader Kim Jong Un in the Seoul-controlled village of Panmunjom near the demilitarized zone that separates the two countries.

Thursday's meeting marked the first of several that will deal with logistical issues, including whether Kim will cross the border on foot or by car. Officials will also discuss security and media coverage of the summit.

The summit would be the third of its kind since the end of the Korean War. However, it will be the first time a North Korean leader sets foot in South Korea since then. Both countries have observed a UN-backed armistice but technically remain at war due to the lack of a peace treaty.

North Korea has launched a major diplomatic offensive that saw it send athletes and officials to the Winter Olympic Games hosted by South Korea.

Last month, South Korean officials announced that Kim wanted to meet face to face with US President Donald Trump and had vowed to stop nuclear tests and missile launches until the meeting. The officials also signaled Pyongyang's interest in holding an inter-Korean summit.

Kim also made his first international visit to China, considered a key ally for North Korea. According to China's state-run Xinhua News Agency, Kim told Chinese President Xi Jinping that he was "committed to denuclearization."

The world watched last year as Trump and Kim engaged in a war of words that prompted fears the two countries were on the cusp of a nuclear conflict. But tensions have subsided somewhat since Seoul and Pyongyang agreed in December to try to iron out their differences.