German Chancellor Angela Merkel has ruled out permanently stationing NATO troops in Eastern Europe. She said that the alliance will defend the Baltic states, while upholding its treaty obligations with Russia. 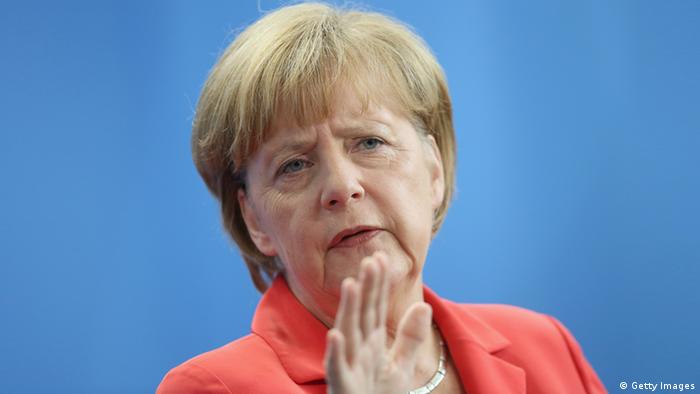 Speaking at a news conference on Wednesday, Chancellor Merkel said that Russia would likely respect the territorial integrity of the three Baltic countries, but acknowledged that NATO still had to take some measures to reassure its eastern member states.

"When it comes to the question of the defense of the Baltic countries, I assume that the territorial integrity of these countries will be preserved," Merkel said, discussing Moscow's intentions in the region.

The three Baltic states Estonia, Latvia and Lithuania - former Soviet republics that are now NATO members - have observed the Ukraine crisis with growing concern for their own safety.

Russian President Vladimir Putin has claimed the right to intervene to defend the rights of Russian speakers. All three countries have significant Russian-speaking minorities.

"We will adopt a series of measures at the NATO summit that will improve the ability of NATO to react quickly in this region, while respecting the NATO-Russia act," Merkel said.

Signed in 1997, the NATO-Russia Founding Act prohibits the Western alliance from basing large number of troops in Eastern Europe, where the former Soviet Union reigned supreme during the Cold War.

Merkel's comments come as US President Barack Obama visited Estonia, where he reassured Tallinn of Washington's commitment to the country's security.

The Western alliance is searching for a way to reassure its eastern members without provoking the Kremlin. NATO Secretary-General Anders Fogh Rasmussen has proposed creating a rapid reaction force of up to 5,000 troops and pre-positioning ammunition, fuel and other military supplies in Eastern Europe.

But on Tuesday, Estonian President Toomas Hendrik Ilves said that the alliance should establish permanent bases in his country.

"We should not have NATO with two-tier countries, with NATO permanent bases and without," Hendrik said during a trip to Oslo. "This is a wrong signal to send to the potential aggressor."

In addition, Germany has moved to send non-lethal supplies to the Ukrainian military, which is battling pro-Russian separatists in its eastern regions. The supplies would include bulletproof vests, field hospitals and other medical equipment.

NATO meets in Newport, Wales on Thursday, where the alliance is expected to adopt a more concrete plan to defend its eastern member states.

Although Ukraine is not a NATO member, President Petro Poroshenko will also attend the summit. Kyiv, officially a non-aligned country, has publicly stated that it would like to join the Western alliance.