Munich Security Conference boosts trans-Atlantic ties for Germany in a crisis | Germany | News and in-depth reporting from Berlin and beyond | DW | 20.02.2022

The timing of the Munich Security Conference gave Germany a chance to underline its commitment to trans-Atlantic alliances. But the Ukrainian president warned that old international security structures are under threat. 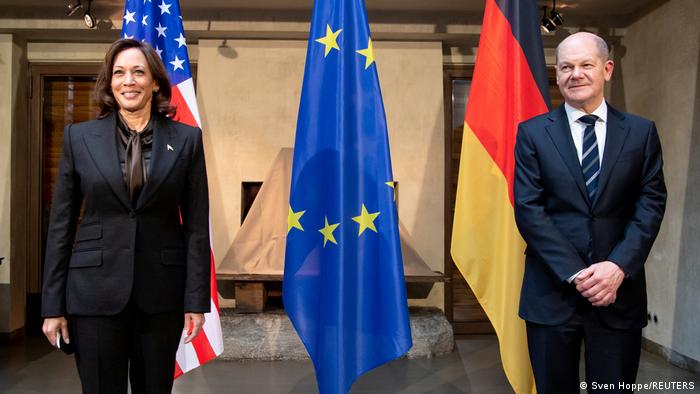 The Munich Security Conference could barely have come at a more critical moment for trans-Atlantic relations, especially for Germany. Chancellor Olaf Scholz, under pressure in recent weeks for what many perceived as prevarication in the face of Russia's troop build-ups near the Ukrainian border, had a chance to stage a show of trans-Atlantic solidarity on a grand German platform.

There's nothing like a crisis to focus minds and bring people together, and there are signs that the MSC has galvanized trans-Atlantic partnerships. Speakers at the security conference, including EU Commission President Ursula von der Leyen, went to great lengths to emphasize how European countries and the US were closely coordinating their response to the Ukraine crisis.

EU's von der Leyen: 'We still hope that diplomacy has not spoken its last word'

"The timing was perfect — for all the wrong reasons because of Russia's militarism," Michael Werz, a German analyst and senior fellow at the Washington-based Center for American Progress, told DW. "The collateral benefit of President Vladimir Putin's threat of war is palpable: Western countries close ranks and NATO is seen as more vital than in a long time."

The new chancellor's speech in the opulent Bayerischer Hof hotel on Saturday morning was accordingly laced with protestations of commitment to the NATO alliance. "The developments of recent months, in particular, show us how vital it remains to concentrate on the issue of collective defense in the North Atlantic area," Scholz told the assembled delegates.

There was also a sense that Scholz wanted to reassure NATO that, despite leading a broadly left-wing coalition, his government would take its defense duties seriously.

"We need to muster the capabilities required for this. And yes, that includes Germany, too," Scholz said. "Airplanes that fly, ships that can set out to sea, soldiers who are optimally equipped for their dangerous tasks — these are things that a country of our size, one that bears a very special responsibility within Europe, must be able to afford. We owe this to our allies in NATO, too."

Getting to know Scholz

There were signs that the speech was well-received by the Americans in the conference hall, which included a good-sized delegation from the US Congress, apparently curious about what Scholz was like up close.

"It's self-evident that in America, and elsewhere, we are beginning to get to know you," former Senator Joe Lieberman told Scholz. "And I thought your remarks today were very reassuring and very encouraging. They were strong, they were clear, and they were principled."

Werz said he felt the Americans at the Munich Security Conference found Scholz's speech reassuring. "That's what I am hearing," he told DW. "Scholz emphasized a strong commitment to democracy and universal values, to the international order and even the strengthening of the German military."

Werz added that the usual pressure the US has exerted on Germany over the last few years had eased somewhat, partly because Congress' appetite for ever-stronger sanctions against Russia is fading. "Congress was the driver of (legitimately) putting pressure on Germany but now is unable to do its job and looks an unreliable partner while Scholz has moved forward," Werz said in an email.

What's next after Munich Security Conference winds down?

Earlier in the MSC, there was a public show of trans-Atlantic solidarity when German Foreign Minister Annalena Baerbock and US Secretary of State Antony Blinken met on stage for a public discussion. Blinken was notably easy on his "friend and colleague Annalena" on the usual sticking points between the US and Germany.

Most obviously, this arose with the question of Germany's failure to deliver weapons to Ukraine, despite frequent calls for help from Kyiv. Asked once again, Baerbock repeated Germany's principle: That Germany's historic responsibility means that it cannot send weapons directly into conflict zones —even though it has bent that rule in the past.

Blinken defended his counterpart, even suggesting Germany's principles were a vital part of the alliance's response to Russia.

"We have been not only acting in a coordinated way, we have been acting in a complementary way, bringing different things to the table that all add up to the solidarity that has been very effective," Blinken said. "Germany, Annalena, has been speaking with a tremendous moral clarity when it comes to Ukraine … In fact, you can't really place a value on that. It's essential to what we're doing."

Ukrainian President Volodymyr Zelenskyy was less patient in a passionate speech on Saturday.

"Ukraine has been serving as a shield for eight years now"

"Some countries are committing crimes while others resort to indifference that turns them into accomplices," he said in Munich. "Whether they give us hundreds of modern weapons or five thousand helmets. We appreciate any help, but everyone should understand that these are not charitable contributions that Ukraine should ask for or remind of. … This is your contribution to the security of Europe and the world."

Germany, meanwhile, insists that it is already everything it can to help Ukraine.

"I have underlined here in Munich that we stand totally on the side of Ukraine, in full solidarity, that we will continue to support Ukraine as the biggest financial donor," Baerbock told DW.

Nevertheless, Zelenskyy's warnings about the fragility of European peace will have rung in the ears of delegates from both sides of the Atlantic. He will hope it may also have helped galvanize the alliance that he — one day — may want to join.

Russian and Belarusian troops will continue their joint exercises near Ukraine, which were expected to end on Sunday, due to the "escalating situation" in Donbas.