Fact check: Does Germany send weapons to crisis regions? | Germany | News and in-depth reporting from Berlin and beyond | DW | 08.02.2022 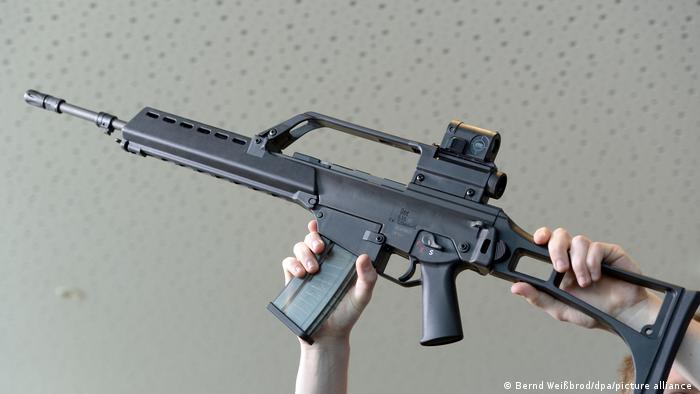 Germany has supplied G36 assault rifles, like this one, to the Kurdish peshmerga in northern Iraq

According to Western intelligence services, Russia has deployed about 100,000 troops on its border with Ukraine. From the Ukrainian and the Western point of view, that represents a concrete military threat, which is why numerous countries are supporting Ukraine with weapons and equipment. For its part, Germany has so far supplied 5,000 helmets.

For the Ukrainian government, this shipment of protective gear is not enough. Last Friday, it officially asked the German government to send defensive weapons and ammunition. Berlin, however, has to date rejected the request.

Both Chancellor Olaf Scholz and Foreign Minister Annalena Baerbock have cited the German government's political principle of not exporting weapons to crisis regions. The coalition agreement between the Social Democratic Party (SPD), the Greens and the Free Democrats (FDP) states that "exceptions can only be made in justified individual cases, which must be documented in a publicly transparent manner."

Angry commenters on social media have pointed out that Germany has made exceptions in the past. "Ask Germans about weapons supply to Saudi Arabia, Egypt, Turkey, UAE," a DW user from Ukraine wrote on Facebooklast week. "German weapons are used in wars and armed conflicts all over the planet — also by the IS, by the way," reads another comment.

But is that true?

"We have certainly delivered in the past, but always on a situation-by-situation basis," Christian Mölling, a defense and security expert at the German Council on Foreign Relations (DGAP), told DW. "That means that in Germany there is the principle of a case-by-case examination. We look at each individual case."

Pieter Wezeman of the Stockholm Institute for Peace Research (SIPRI) also confirmed to DW that Germany has sent weapons to crisis regions in the recent past.

German weapons in the Yemen war

Egypt, for instance, is the fifth-largest recipient of German arms exports since 2010, according to export data from SIPRI's trend indicator value. Between January 1, 2021, and December 14, 2021, alone, export authorizations worth about €4.34 billion ($5 billion) were issued for Egypt, according to data from the German Ministry for Economic Affairs and Climate Action.

Most of the authorizations were approved by the previous German government during Chancellor Angela Merkel's final days in office — despite the fact that the Egyptian military is involved in conflicts in Yemen and Libya, and has been criticized for massive human rights violations. Despite Egypt's involvement in the war in Yemen, Germany has supplied the country with warships like this one

Egypt may well be using German weapons in the wars in Yemen and Libya, according to Wezeman. "The items that Germany supplies to Egypt can be divided into two main parts," he said. "One is the supply of air defense systems. They have little to do with the war in Yemen, as far as I can see."

However, the other commodity group — warships — may be problematic. "The frigates themselves certainly could play a role in the type of war we have previously seen in Yemen, as an important part of that has been a naval blockade," he said. Wezeman added that large-scale arms deliveries like this contribute to legitimizing and strengthening the military government in Egypt.

Several other countries whose militaries have been involved in the Yemen conflict since 2015 have also received arms deliveries from Germany, including Saudi Arabia, the United Arab Emirates, Kuwait and Qatar. According to the German government's 2020 arms export report, Qatar was approved to receive ammunition for cannons, rifles, shotguns, and parts for howitzer ammunition that are on the War Weapons List, an appendix to Germany's War Weapons Control Act. In late 2020, the German government also granted approval for the delivery of 15 Gepard anti-aircraft tanks to Qatar.

In 2019, the investigative project #GermanArms proved that German weapons play a major role in the war in Yemen. The German government had to admit that the approval of some of the arms deliveries was a mistake, Wezeman said.

"Or at least, while these weapons were supplied, it became increasingly clear that the risks involved in it were maybe too high, and they stopped supplying them. And that was a particularly the case in Saudi Arabia, where there was a significant deal for the supply of patrol boats, for example," he said.

After the 2018 murder of Jamal Khashoggi, a journalist critical of the Saudi government, at the Saudi Arabian Consulate General in Istanbul, all licenses already granted for arms exports to Riyadh were put on hold and later revoked. Since then, Germany has imposed a ban on arms exports to Saudi Arabia, which has been extended several times.

Exceptions have, however, been made. German manufacturers have been allowed to supply parts for joint defense projects destined for Saudi Arabia — the production of fighter jets in cooperation with NATO partners, for example.

NATO partner Turkey is also a highly controversial buyer of German weapons. The country has "changed considerably" in recent decades, said DGAP expert Christian Mölling, adding that, in retrospect, it was wrong for Germany to deliver arms to the country. However, he argued that "it's a government's right to get assessments wrong, precisely because they remain assessments."

Germany supplied Turkey with military weapons for years, to the value of hundreds of millions of euros — even though Turkey was criticized for human rights abuses, and the United Nations counts it among the countries that, by supplying weapons, are intervening in the war in Libya. For decades, the Turkish government has also taken military action against the insurgent Kurdistan Workers' Party, both in Turkey itself and in neighboring countries.

The situation became particularly volatile following Turkey's military offensive against the Kurdish YPG militia in northern Syria in 2018. "Are German anti-tank missiles now hitting German tanks?" was the question some media were asking at the time. This was a reference to German support, since the summer of 2014, for the Kurdish peshmerga in northern Iraq in their fight against "Islamic State" militias.

They were supplied not only with equipment such as helmets, protective vests and radios, but also with a comprehensive package of weapons that included assault and machine guns, pistols, bazookas, anti-tank weapons and hand grenades, and which German government records recorded as being worth more than €90 million. 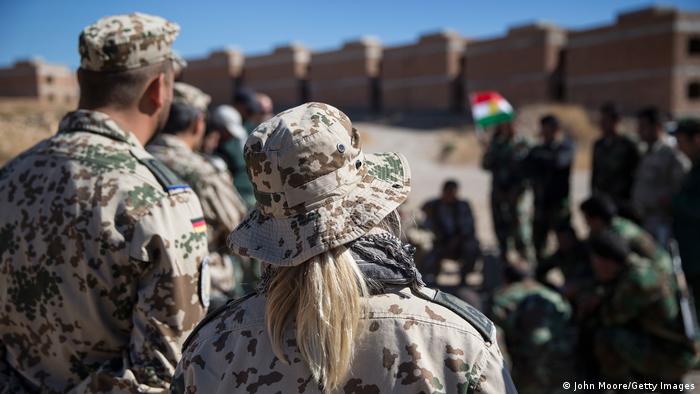 The Kurdish regional government pledged at the time that it would use the weapons exclusively against the "Islamic State," but this claim was not monitored. Responding to an inquiry by the Bundestag delegate Agnieszka Brugger in 2016, the German government said it could not rule out that German weapons had found their way onto the black market — in northern Iraq, for example.

And according to the experts interviewed by DW, not even so-called post-shipment control measures, that is, the monitoring of the whereabouts of supplied weapons, can exclude the risk that these weapons will be used in conflicts for which they were not intended.

The fact that there is currently no legal framework for arms exports is something the new German government wants to change. Jürgen Trittin, the Greens' foreign policy spokesman in the Bundestag, said on ARD television that the Economic Affairs Ministry, which his party heads, had submitted a draft law to that effect for initial consultation. Trittin said it was intended to "make the non-binding principles governing arms exports binding."

Conclusion: Germany has not consistently adhered to its principle of not supplying weapons to crisis regions. On multiple occasions, the German government has approved arms deliveries to countries that are parties to conflicts, or are themselves crisis areas.

Is Germany letting its allies down?