Russian and Belarusian troops will continue their joint exercises near Ukraine, which were expected to end on Sunday, due to the "escalating situation" in the Donbas region. 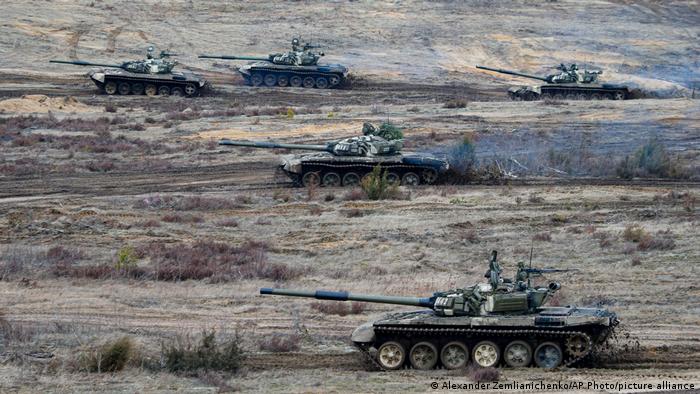 The Defense Ministry of Belarus announced that military exercises with Russian forces would be extended past their planned end date this Sunday.

Belarusian officials said the drills would continue due to "an increase in military activity" near the borders of Russia and Belarus and the "escalating situation" in the rebel-controlled Donbas region in Ukraine.

"The presidents of Belarus and Russia decided to continue inspections of the readiness of Union State forces," Defense Minister Victor Khrenin said in a statement, referring to the union of Russia and Belarus.

The joint maneuvers were originally planned for a 10-day period, taking place in five military training areas in western and southwestern Belarus, near the country's borders with Poland and Ukraine. Earlier this week, Russian Foreign Minister Sergey Lavrov confirmed the drills would end on Sunday "as previously announced."

NATO believes the 30,000 Russian troops in Belarus, part of some 150,000 Russia has moved towards Ukraine, could be part of an incursion strategy.

The Kremlin said Russia had successfully test-launched hypersonic and cruise missiles aimed at sea and at land-based targets.

Putin observed the exercises with Belarusian leader Alexander Lukashenko via footage on screens at a "situation center."

Russia's Defense Ministry earlier had described "a planned exercise of strategic deterrence forces... during which ballistic and cruise missiles will be launched."

The air force, southern military district units, as well as the northern and Black Sea fleets would be involved.

The ministry said the drills had been planned some time ago.

Meanwhile, President Putin told his French counterpart Emmanuel Macron that he intends to withdraw Russian troops from Belarus as soon as ongoing military exercises there are over, the French president's office said on Sunday.

Following a call between both leaders, the French presidency said that this claim "will have to be verified" as it appeared to contradict a statement by the Belarusian government that the Russian military would "continue inspections" beyond Sunday.