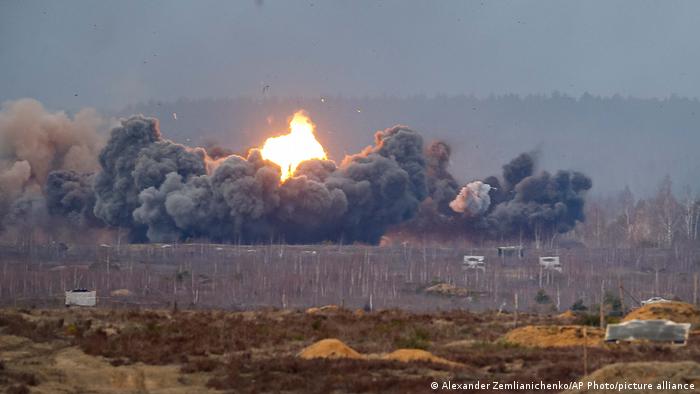 The exercises, which are being conducted jointly with Belarus, will take place through Sunday

While Russia holds missile tests several times a year, the practices came during an extremely tense impasse with the West over Ukraine.

Kremlin spokesman Dmitry Peskov said Russia — which has the second-biggest nuclear arsenal in the world after the US — had given notice to all proper channels, and that the drills "should not cause anyone concern."

What did the exercises involve?

The Kremlin said Russia had successfully test-launched hypersonic and cruise missiles and that the missiles were directed against sea at land-based targets.

It said Putin had observed the exercises with Belarusian leader Alexander Lukashenko via footage on screens at a "situation centre."

Russia's defense ministry earlier had described "a planned exercise of strategic deterrence forces... during which ballistic and cruise missiles will be launched."

It added that the air force, southern military district units, as well as the northern and Black Sea fleets would be involved.

The ministry said the drills had been planned some time ago.

It said the plan was "to test the readiness of military command and control bodies, combat launch crews, crews of warships and strategic missile carriers to carry out assigned tasks, as well as the reliability of weapons of strategic nuclear and non-nuclear forces."

The drills coincide with tensions over some 150,000 Russian troops posted near the country's border with Ukraine, and the Kremlin expressing concern about intensified fighting in eastern Ukraine.

While Russia has announced that some of its troops have moved back away from the border and returned to their permanent bases, the West says there has been no meaningful withdrawal.

Peskov was asked to comment on Belarusian leader Alexander Lukashenko's statement that he was planning to attend a military exercise with Putin and whether that meant the exercises on Saturday.

Lukashenko and Putin met on Friday to discuss ongoing joint drills in Belarus, which borders Ukraine to the north.

The exercise involving forces moved from Russia's Far East fueled Western fears that they could use Belarusian territory as a short cut to the Ukrainian capital, Kyiv.