Defense ministers have held talks over fears that Russia could be seeking to send its troops into Ukraine. Moscow says it has withdrawn some forces and that it has no plan to launch an invasion. 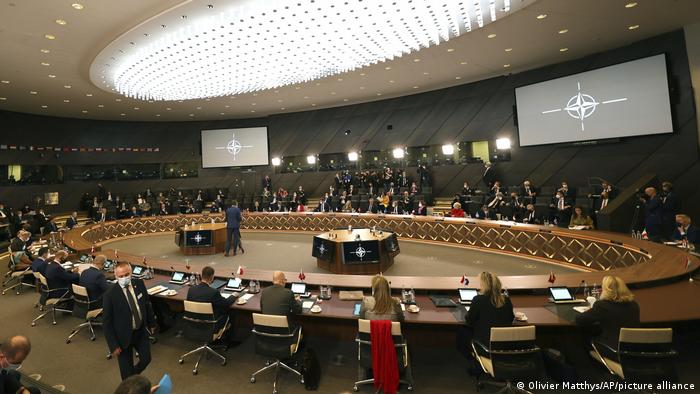 However, he said members feared Moscow was seeking a "pretext for an armed attack on Ukraine."

"There is still no clarity, no certainty about the Russian intentions," Stoltenberg told reporters. "We don't know what will happen. What we do know is that Russia has amassed the biggest force we've seen in Europe in decades in and around Ukraine," Stoltenberg said.

The comments came at the end of talks over 2 days as NATO defense ministers met in Brussels amid persistent fears of a potential Russian invasion of Ukraine. The Ukrainian government and Russia-backed separatists in the eastern Luhansk region have traded accusations about of shelling across the ceasefire line.

Stoltenberg dismissed suggestions that the threat on Ukraine's border had diminished amid Russia's claims of a withdrawal.

"We call on Russia to do what it says and withdraw its forces from the borders of Ukraine," he said. "This will be an important first step towards a peaceful political solution."

What have NATO members said about the Ukraine crisis?

NATO allies maintained that there was still a strong threat of an attack, with an estimated 150,000-plus Russian troops surrounding Ukraine on three sides. Moscow claims its troops are there for exercises, and that some were being pulled back because the drills have been completed.

The alliance is looking to strengthen its eastern flank, warning that the threat from Russia had become the "new normal in Europe."

In a joint statement on Wednesday, the NATO allies called for Russia to reverse its troop build-up and engage in further talks.

"We urge Russia, in the strongest possible terms, to choose the path of diplomacy, and to immediately reverse its build-up and withdraw its forces from Ukraine in accordance with its international obligations and commitments. We remain committed to our dual-track approach to Russia: strong deterrence and defence, combined with openness to dialogue."

Some allies have already rushed to bolster defenses with thousands of troops and hardware amid the fears about Moscow's intentions.

The United States says it is temporarily deploying some 4,700 additional soldiers to EU and NATO member Poland in response to Russia's troop build-up near Ukraine.

Joined by Ukraine and Georgia

The NATO allies were joined by the defense ministers of Ukraine and Georgia, as well as representatives of Finland, Sweden and the EU.

Stoltenberg said they had discussed the Russian Duma's vote to ask for the Donbass regions to be recognized as independent, as well as  Russia's occupation of the Georgian regions of Abkhazia and South Ossetia.

The NATO chief said the alliance had reaffirmed their strong commitment to maintaining an open door policy to would-be members, and stressed the importance of partnerships.