How the Ukraine-Russia crisis reached a tipping point | Europe | News and current affairs from around the continent | DW | 22.02.2022 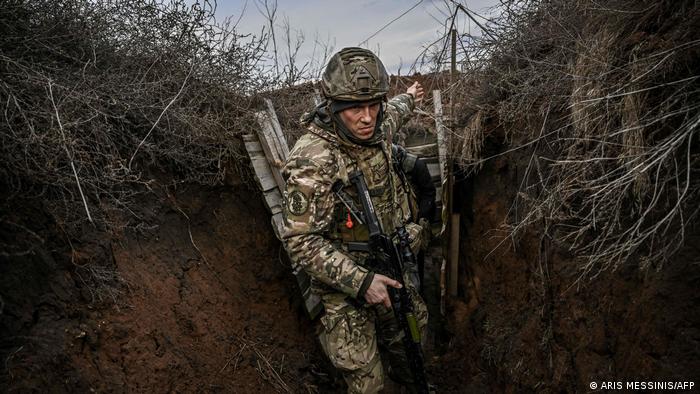 Ukrainian troops on patrol at the frontline in eastern Ukraine

As far as size is concerned, Ukraineis the largest country on the European continent, with the exception of the European part of Russia. It became a state following World War I and then was a Soviet republic right up until the fall of the Soviet Union. On August 24, 1991, it officially declared its independence.

Russia recognized Ukraine's borders in a number of international agreements, including the Budapest Memorandum of 1994. While Ukraine was economically dependent on Moscow, it politically began looking westwards and started talking with both the European Union and NATO. This all culminated in the Orange Revolution in 2004, with voters electing the pro-Western candidate Viktor Yushchenko as their new president in January 2005. He remained in office until 2010.

His pro-Russian successor, Viktor Yanukovych, stopped the signing of an association agreement with the EU he had supported earlier,  and by doing so sparked protests that led to his ousting a few weeks later. In the spring of 2014, Russia then seized and annexed the Crimean peninsula.

The annexation of Crimea took place without bloodshed, unlike the bloody battles and heavy losses in the eastern part of the country that have been ongoing since 2014. Russian-backed separatists are fighting for what they have called "people's republics " in the Donetsk and Luhansk regions, and more than 13,000 people have been killed so far, according to the UN.  An additional 1.4 million Ukrainians have been internally displaced by the conflict.

In February 2015, France and Germany helped broker a ceasefire deal between Russia and Ukraine, known as the Minsk agreement (Minsk II). That agreement, however, is currently on hold after more than 20 failed ceasefire attempts.

The Kremlin recognized the independence of Donetsk and Luhansk on Feb. 21, 2022

Since the end of the Cold War, NATO has pursued what it has called an "open door policy" with regard to possible new members.

During its 2008 summit in Budapest, it held out the prospect of a possible NATO membership for Ukraine — without, however, providing a specific date. Preventing Ukraine from joining NATO is one of Moscow's key demands in the current crisis. It continues to see such a move as an existential threat to Russia.

Several months ago, Russia began a massive military buildup on the border by moving tanks, artillery and attack helicopters into position.

In addition, it and neighboring Belarus have more than 100,000 battle-ready troops on standby. According to Moscow, the troops are just taking part in military exercises.

The Russian military is one of the most powerful in the world. It outnumbers Ukraine by far in terms of personnel, equipment and weapons.

In response to the Russian troop deployments, NATO has strengthened its eastern flank. 350 German Bundeswehr soldiers and around a hundred military vehicles have been sent to NATO member Lithuania, increasing to almost 1,000 the number of German soldiers stationed in the former Soviet republic.

Germany has saidit will not be sending offensive military equipment to Ukraine, unlike NATO members Poland, Great Britain and the United States.

Despite warnings from Western countries — including Germany — that the Kremlin should not recognize the separatist regions in eastern Ukraine as sovereign, on February 21 Putin signed a decree recognizing the independence of both Luhansk and Dontesk. Later that evening, Moscow ordered its troops to enter the two breakaway regions.

This article has been translated from German. It was originally published on February 16, 2022 and was updated on February 22 when the Kremlin recognized the independence of Donetsk and Luhansk.

European countries are using various dialogue formats to resolve the Ukraine conflict. The Normandy Format, established in June 2014, is one; and now the British prime minister has suggested a new military pact.

All-out war in Ukraine could cause a mass exodus of refugees to Poland. Polish authorities are preparing for all eventualities.

Germany has repeatedly rejected delivering arms to Ukraine. But in the face of the continuing Russian military buildup, NATO countries have sent thousands of tons of weapons and ammunition to Kyiv.