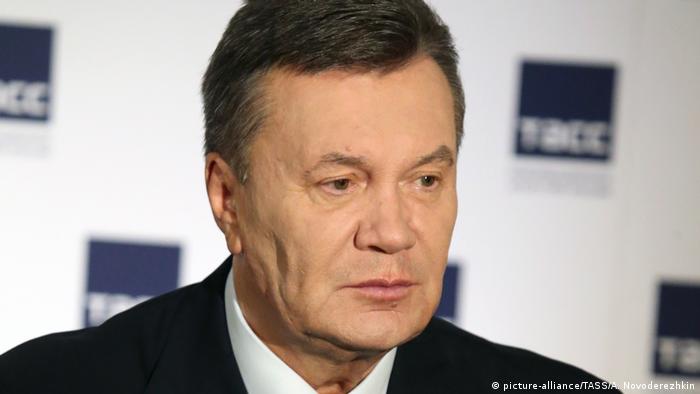 A Ukrainian court on Thursday sentenced ex-President Viktor Yanukovych in absentia to 13 years in prison for treason. He had been on trial for high treason since 2017. The public prosecutor had requested up to 15 years.

"Yanukovych committed a crime against the foundation of Ukraine's national security," Vladyslav Devyatko, the judge in the Kyiv district court, said.

The judge added that Yanukovych's time in office had paved the way for Russia to annex Crimea and fed the fighting in eastern Ukraine between factions loyal to Kyiv and Moscow.

Yanukovych is currently thought to be living in exile in Russia. His prison term would begin "the moment he is detained," judge Devyatko said. 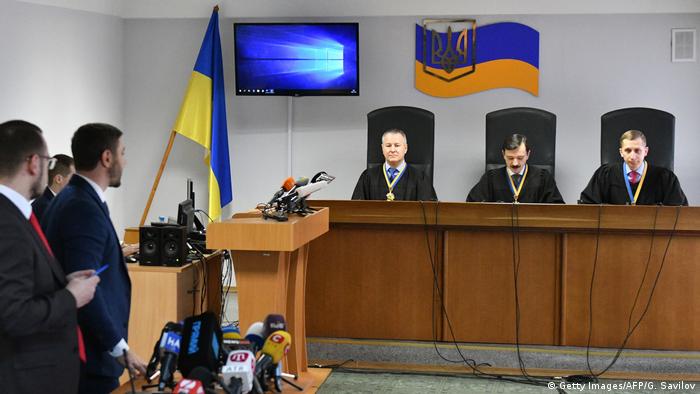 Lawyers for Yanukovych (L) were in attendance in Kyiv as the judges delivered the sentence. Yanzkovych was tried in absentia.

In late 2013, Yanukovych was confronted with street protests, dubbed "Euromaidan," after he refused to sign an agreement between Ukraine and the European Union that would have led to closer ties between the two entities. Following violent clashes between pro-Western protesters and Ukrainian police special forces, Yanukovych was stripped of his position by the Ukrainian parliament. He then fled first to Crimea and later to Russia.

The charges of high treason stemmed from the ex-president's request made while in exile to have Russia send troops to Ukraine.

In addition to the high treason charges, Yanukovych also faces criminal investigations over the use of force against demonstrators and usurpation of power.

A lawyer for Yanukovych described Thursday's ruling as a PR move ahead of the Ukrainian presidential election on March 31.

"There is no doubt that the court worked under pressure from the current government," the lawyer said. He added that Yanukovych planned to appeal the ruling.

Yanukovych served as president from his election in 2010 to when he fled the country in February 2014.

His successor, Petro Poroshenko, has steered Ukraine away from Russia and towards the EU. Currently, tensions between Ukraine and Russia remain high with Crimea under de-facto Russian control, ongoing fighting in Ukraine's east, and a standoff over sea access through the Kerch straight.

With two elections next year, Ukraine is facing upheaval on the domestic front. Russia, meanwhile, is shaking up its foreign policy, particularly with the United States, after withdrawing from the INF treaty. (24.12.2018)