Russia-Ukraine crisis: Who supplies weapons to Kyiv? | Europe | News and current affairs from around the continent | DW | 14.02.2022

Germany has repeatedly rejected delivering arms to Ukraine. But in the face of the continuing Russian military buildup, NATO countries have sent thousands of tons of weapons and ammunition to Kyiv. 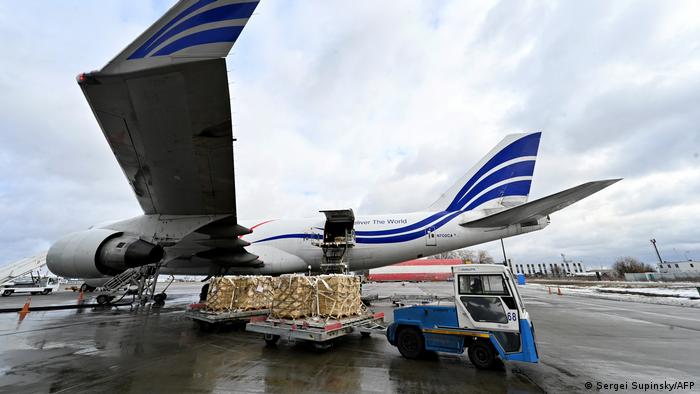 Almost every day, Ukrainian Defense Minister Oleksiy Resnikov posts new pictures on his Twitter account, invariably showing large transport planes crammed with huge heavy crates. Inside the crates are weapons and ammunition that the US and UK are sending to Ukraine.

The purpose is to strengthen Ukrainein the face of the massive Russian troop buildup on its border. According to the Ukrainian government, Western partners have already provided Kyiv with $1.5 billion in military aid. Germany has so far rejected arms deliveries to Ukraine.

Javelin and NLAW: Anti-tank missiles from the US and UK

Some of the planes Resnikov welcomed on Twitter transported Javelin and NLAW missiles to Kyiv. As part of the "Blizzard 2022" military drill that has just begun, many Ukrainian soldiers will probably shoulder these freshly delivered anti-tank weapons for the first time. After being launched from the shoulder, the "fire and forget" system does not require further guidance. Their small size and light weight make these weapons highly mobile.

Since 2019, the US has provided Ukraine with the Javelin system of launchers and actual missiles. Information on the exact number varies, but hundreds of the missiles have likely been delivered to Ukraine since the fall of 2021 alone. The US government has also given permission to the Baltic states to transfer Javelin missiles from their stockpiles to Ukraine.

Javelin is considered the most advanced anti-tank weapon in the world; it can engage targets such as armored vehicles or bunkers from more than 2,000 meters (approx. 6,500 ft). Javelin can also destroy heavy tanks with a "top-attack" on their roof, where there is the least armor protection.

This also applies to the similarly functioning NLAW missiles from British stocks, which, however, have a shorter range. London most recently provided Ukraine with about 2,000 NLAW missiles.

"These systems are precisely what we need most," says Mykola Bielieskov of the National Institute for Strategic Studies in Kyiv, an institution that advises the Ukrainian president on security issues. "They are very easy to integrate into our army arsenal and soldiers can learn how to fire them very quickly," Bielieskov told DW. "In the event of a Russian attack, their mass employment would be very effective. That is why we need more of them." 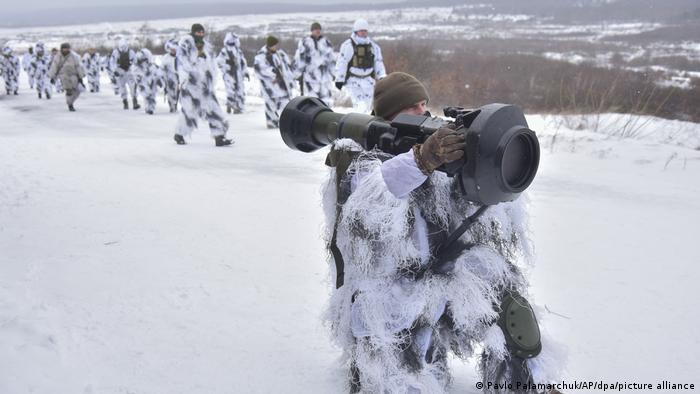 In terms of numbers and weaponry, the Russian army is clearly superior to Ukraine's. That is especially true for its air force. "In the event of an attack, the Russians could achieve air superiority within two to three days by completely eliminating the Ukrainian air force and knocking down air defenses," says Gustav Gressel, a security policy expert at the European Council on Foreign Relations in Berlin.

Russia's military has outnumbers Ukraine's in personnel, equipment and weapons

Russia not only has many more fighter jets than does Ukraine, but its military is also capable of monitoring radio and radar of Ukrainian aircraft and air defense, since the technology is Soviet-made. In addition, Gressel said, Ukrainian pilots have logged fewer flight hours than Russian pilots because the aircraft are being kept on the ground due to a shortage of spare parts.

"All this makes the Russian air force superior," Gressel told DW. "And once Russia has air superiority, it has free play to attack ground forces. Then it can also use drones in Ukrainian airspace to locate Ukrainian formations, and order artillery strikes on them. That is how you can wear down an adversary even before you actually enter into ground combat with them."

Stinger and GROM: anti-aircraft missiles from US, Poland

From Ukraine's point of view, therefore, an upgrade of air defense is particularly crucial. But that is hardly possible in the short term, Gressel says. "If I were to put more complex air defense missiles in the Ukrainians' backyard, such as the Patriot system or, for example, the German IRIS-T SL, that would provide a real boost." But training on such systems takes a lot of time, he said. "I would take several months before they could operate these systems successfully. And we just don't have several months."

So here, too, the focus is now on one-man missiles known as Man Portable Air Defense Systems or MANPADS. US-made Stinger missiles will be delivered to Ukraine from Lithuania in the coming days, Prime Minister Ingrida Simonyte announced Thursday. In addition, Poland is supplying Kyiv with the GROM, a similar heat-guided weapon that can engage aircraft from up to three kilometers away. Since the Ukrainian army already has similar weapons in its arsenal, training requirements for the GROM and Stinger should be low. 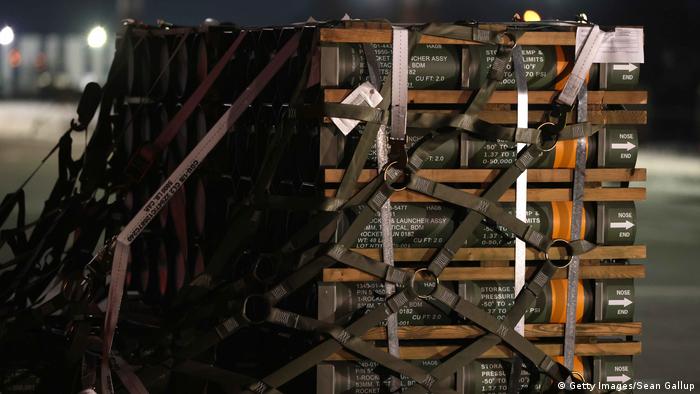 The US, UK and other NATO member states have sent numerous weapons and military hardware to Ukraine in recent days

"These MANPADS are very useful because they make Russian air strikes less effective," said analyst Bielieskov. "If you deploy them in large numbers, you certainly won't shoot down every Russian jet and helicopter. But Russia would have to pay a steep price for an attack."

Ukraine has purchased at least 20 Bayraktar TB2 drones from NATO country Turkey in recent years. The unmanned aircraft can be equipped with Ukrainian-made engines. Ukraine has also acquired a license to manufacture Bayraktar drones. The construction of a factory for that purpose was announced by Defense Minister Resnikov last week.

The Turkish Bayraktar can be used for reconnaissance and can be equipped with laser-guided bombs and missiles. In late October, a Ukrainian Army Bayraktar destroyed an artillery piece of pro-Russian separatists in the east of the country. 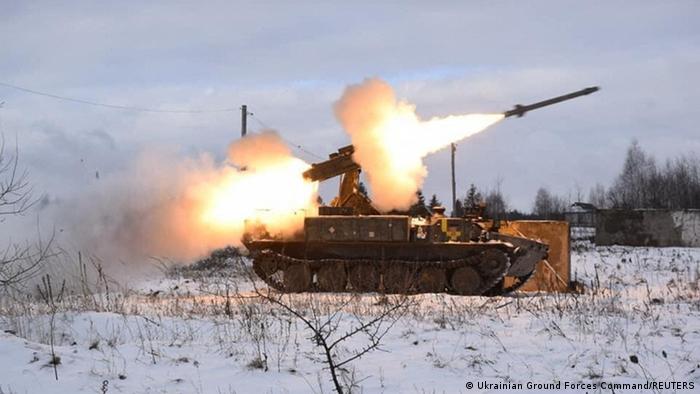 Drones such as Bayraktar offer militarily inferior armies the ability to inflict losses on a stronger opponent. During the 2020 war between Azerbaijan and Armenia, Soviet-era air defense systems were shown to be largely ineffective against modern drones like the Bayraktar. However, whether the same is true for newer Russian-made surface-to-air defense systems such as the Panzir S1 is debatable.

Bayraktar drones will also be used in the "Blizzard 2022" military drills that started on Thursday, according to the Ukrainian Defense Ministry.

In addition to one-man missiles and protective equipment such as helmets and vests, the crates that are currently landing at Kyiv airport on transport planes contain mostly ammunition. The ammunition comes from different countries including the Czech Republic and Poland, a country that also feels threatened by Russia and has been transferring weapons to Ukraine for years.

In addition to the countries mentioned so far, NATO countries Canada and France have also supplied weapons to Ukraine since 2014, according to the Stockholm-based peace institute SIPRI. In recent weeks, deliveries from the United Kingdom and the United States in particular have increased sharply. According to Defense Minister Resnikov, 1,300 tons of weapons have already been shipped to Ukraine from the US alone.

"This will make little difference to the Russian president's military calculations," says security expert Gressel. "But politically it could have some effect. After all, Russia must also reckon with sanctions in the event of an attack. And the credibility of sanctions threats is underlined with these arms deliveries." After all, a parliament that decided to supply weapons would probably not be hesitant to impose sanctions in the event of an emergency. "In this respect, the growing number of European states supplying Ukraine with weapons, even if it's just old artillery ammunition, is also a political sign for Moscow."

The fact that the German government does not want to go along with this and is obstructing, for example, the Estonian delivery of nine howitzers is "illogical," says defense expert Bielieskov. This will be remembered in Kyiv, he added. The German government, however, has repeatedly stressed that Germany generally refrained from sending weapons to crisis regions.

Germany and Ukraine: Trade and aid, but no weapons

To the chagrin of the elites in Kyiv, Germany refuses to supply weapons to Ukraine. However, trade with Ukraine is thriving, and Germany provides more aid than any other EU state.