Germany and Ukraine: Trade and aid, but no weapons | Europe | News and current affairs from around the continent | DW | 17.02.2022

Germany and Ukraine: Trade and aid, but no weapons

To the chagrin of the elites in Kyiv, Germany refuses to supply weapons to Ukraine. However, trade with Ukraine is thriving, and Germany provides more aid than any other EU state. 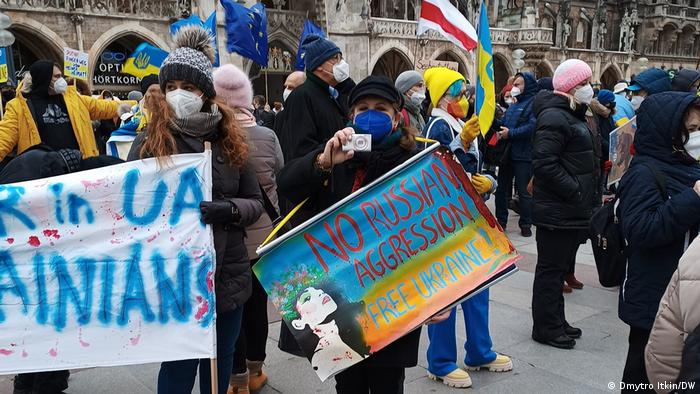 Protesters against Russian aggression in Dresden

Russian President Vladimir Putin can already claim one success in the Russia-Ukraine crisis: German-Ukrainian relations, which have been good in recent years, are suffering.

There is deep-seated frustration amid the Ukrainian elites because of the controversial Nord Stream 2 gas pipeline on the one hand and now because Germany has decided not to supply weapons to Ukraine. There is currently quite a lot of discussion about how much support Germany has given Ukraine since the pro-European Maidan protests, also known as the "Revolution of Dignity," that took place seven years ago.

In early February, German Chancellor Olaf Scholz did the math to counter criticism from Kyiv. He said that nearly €2 billion ($2.75 billion) in direct aid had flowed from Germany to Ukraine since the country had spoken out in favor of democratic elections, a pro-European course and against the Kremlin-friendly government that was toppled in 2014.

In addition, there had been €3.8 billion (ca. $4.3 billion) from the EU budget, whose biggest net contributor is Germany, he pointed out.

Furthermore, Scholz said that there was a debate about who had given "more aid" to Ukraine since 2014 — the US, which is now supplying weapons, or Germany. The Ukrainian government recently calculated that all of its partners together had directed $1.5 billion (ca. €1.3 billion) in "military defense aid" to Ukraine.

Military aid is clearly a priority in Kyiv at the moment. In a recent interview with German public radio Deutschlandfunk, the Ukrainian ambassador to Germany, Andriy Melnyk, criticized the fact that nobody had been able to explain how to break down the aid from Germany since the Maidan revolution. He said that he thought Germany had given Ukraine about €771 million (ca. $876 million) in "development aid" since 2014.

That ranked "Ukraine 13th behind Congo and Tunisia," he added. "We appreciate the aid that we have received from Germany. There is no doubt that we are very grateful," he insisted, at the same time saying that everything had to be put in perspective.

There is clearly a deep sense of frustration. 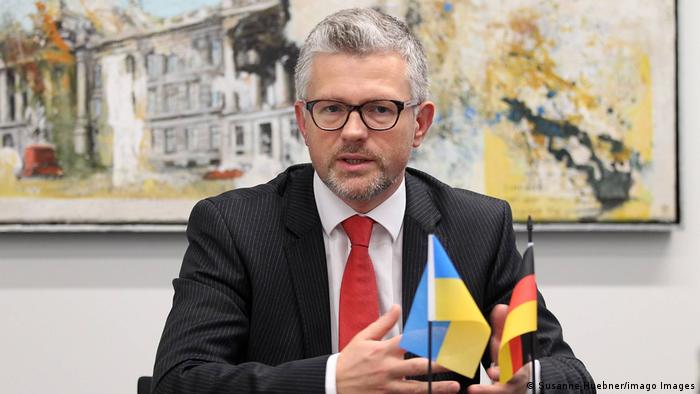 Since the Maidan revolution, Berlin has helped Ukraine to maintain its pro-European course, by setting up hundreds of consulting contracts and aid programs. Many economic experts from Germany have done the rounds of Kyiv hotels.

Via the International Monetary Fund, Germany has also helped stabilize Ukraine's economy and its currency, the hryvnia. Without this help, Kyiv would probably have had to implement a currency reform.

According to the German Foreign Ministry, Germany has supported Ukraine "with over €1.8 billion" (ca. $2 billion). On top of that, it says, the state measures have been expanded by "projects such as political foundations, associations, NGOs."

It also says that some 200 projects with "civil society in the countries of the Eastern Partnership and Russia" are being funded and Ukrainians are involved in about half of them. There has also been financial support for the development of an "independent public broadcaster" in Ukraine and for strengthening youth exchange programs.

The German Ministry for Economic Cooperation and Development has drawn up a detailed overview, which shows that 350 kindergartens and 50 schools have been renovated with German funds and that €300 million (ca. $340 million) has been provided by Germany "to strengthen eastern Ukraine," predominantly to help internally displaced people from the occupied territories.

Funds will continue to be provided in future. The ministry has explained that at the end of 2021, the German government agreed to a €96.5 million (ca. $110 million) deal with its Ukrainian counterpart "for the stabilization of eastern Ukraine, to implement the EU Association Agreement, for energy efficiency, good governance and vocational training." 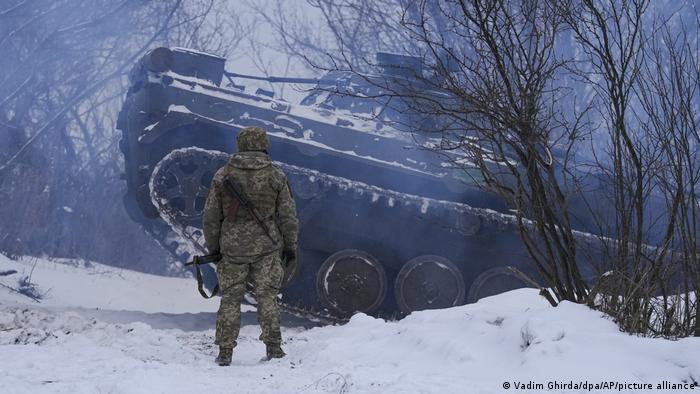 Ukraine would like more military aid from the EU

In actual fact, Germany is more involved in Ukraine than any other EU member. This is particularly evident in bilateral economic relations, which have proven to be surprisingly robust since Russia started its aggressive buildup of troops in the vicinity of Ukraine. German companies maintain their interest in doing business in Ukraine.

"We have never had as many inquiries as in the past few months," Alexander Markus, the chairman of the German-Ukrainian Chamber of Industry and Commerce, told DW. Moreover, last year, he said, the trade balance between the two countries had recovered from the downturn caused by the COVID-19 pandemic in just 12 months.

It is now back up to €7.7 billion (ca. $8.7 billion), which is almost as high as that between Germany and Ukraine's neighbor, EU member Romania, which has half as many inhabitants as Ukraine. Ukraine exported goods and services worth €2.8 billion (ca. $3.2 billion) to Germany. German companies conducted €4.9 billion (ca. $5.6 billion) worth of transactions in Ukraine.

No other EU state has an economic relationship with Ukraine that is as strong as Germany's. According to the Chamber of Industry and Commerce, some 2,000 German companies are active in Ukraine. They do good business and export everything that the German industrial sector produces - except arms.