If war with Russia is not ′imminent,′ why is Ukraine asking for weapons? | Europe | News and current affairs from around the continent | DW | 05.02.2022

If war with Russia is not 'imminent,' why is Ukraine asking for weapons?

The US government has said it will no longer refer to a potential Russian invasion of Ukraine as "imminent" after complaints from Kyiv. But Ukraine is still calling on allies to supply weapons. Why? 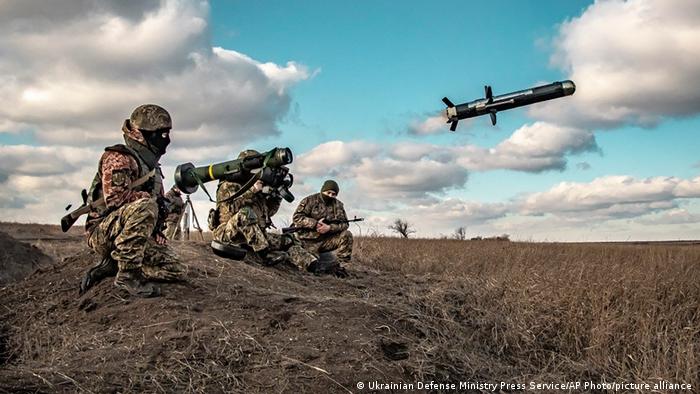 Ukrainian soldiers use a launcher with US Javelin missiles during military exercises in Donetsk region, Ukraine

Moscow has moved an estimated 100,000 troops to Ukraine's northern and eastern borders and to Russian-annexed Crimea since late 2021. The US government warns that number could be increased to 175,000 at short notice. Western intelligence analysts say that the troops are increasingly in possession of the logistics required to launch a campaign, including blood supplies for Russian field hospitals near the Ukrainian border. At the same time Russia is conducting joint drills in Ukraine's northern neighbor, Belarus. NATO estimates those drills will involve a further 30,000 Russian troops.

In response, Ukraine has requested and begun to receive weapons from Western countries in recent weeks: anti-tank systems from the US and UK as well as ammunition and anti-aircraft missiles from the Baltic States. The European Union has pledged over Є1 billion euros ($1.14 billion) in assistance.

The central question is whether this is just brinkmanship by Vladimir Putin — an attempt to focus the West's attention on his demand that Ukraine never be allowed to join NATO — or whether Russia's leader really intends to launch an attack on Ukraine. And if there is indeed an attack, whether that would take the form of a localized intervention or a full-scale invasion.

How did these US-Ukraine tensions arise?

On February 2, White House press secretary Jen Psaki announced that the term "imminent" would no longer be used to describe the threat of a Russian intervention. Not because the objective intelligence assessment had changed in any way, but because the term might inadvertently suggest US certainty about Putin's intentions. The use of the term and the Biden administration's stark rhetoric had also caused significant friction with the Ukrainian government.

"I'm the president of Ukraine and I'm here on the ground, I think I understand the details better than any other president." That was Volodymyr Zelenskyy's message to foreign journalists, who asked him to explain the gap between US messaging and his government's more cautious line. While Washington warned of the acute threat of Russian invasion, Zelenskyy told Ukrainians that the risks to their country were no greater than before. All that had changed, Zelenskyy said, was the sudden increase in international media attention.

It was a statement that was all the more surprising since Ukrainian leaders, including Zelenskyy himself, have spent years calling on the West not to underestimate the threat posed to Ukraine's independence by Russia. Not only that, but Kyiv has put together an impressive wish list of Western weapons systems it says it needs to deter Russia from attacking.

The differences between between Kyiv and Washington are more about "the stylistics and the emphasis" than anything else, argued political scientist Volodymyr Fesenko.  He pointed out that since Russia's annexation of Crimea in 2014, Russia has increased its permanent military presence along Ukraine's borders and carried out large-scale exercises every spring and summer. As a result, Ukrainians, Fesenko said, have learned to live with the constant risk of escalation. And all the current talk of war has already had a very real impact on Ukraine, "war has yet to break out, but the media war is already being fought and that's having a negative impact on the Ukrainian economy," Fesenko told DW.

How have previous escalations been resolved?

This is not first time Russia has used troop movements to ramp up tensions with Ukraine. In March and April 2021, Russia massed tens of thousands of troops on Ukraine's borders and staged navy drills in the Black Sea. The troop movements caused significant concern internationally, but fears of an imminent conflict were less acute than at present. Back then Russian forces did not have the logistics in place to launch a full-scale attack and Russia had not formulated any concrete demands.

In spring 2021, Joe Biden's offer of a one-on-one summit with Vladimir Putin, the man he had only a few weeks earlier called a "killer," saw Russia calling an end to the maneuvers that had brought so many troops to Ukraine's borders.

This time around the mere offer of dialogue is unlikely to be enough to resolve tensions. The Biden-Putin summit in Geneva in June 2021 did little to advance Russian aims. This time Russia issued a list of demands at the outset of this cycle of escalation, including a ban on Ukraine ever joining NATO and a commitment by the alliance to withdraw troops and military hardware from Eastern European member states. NATO has already ruled out meeting either of these demands.

That leaves talks about controlling intermediate-range missiles in Europe as the only part of Russia's demands with any chance of progress. Observers expect that any such deal on weapons control, even if it is reached, would be unlikely to be prove enough of a diplomatic win for the Kremlin to be willing to de-escalate.

How much is this escalation costing Ukraine?

Even without a single shot being fired, talk of imminent war in Ukraine is already damaging international investors' confidence in Ukraine. That is part of the reason why President Zelenskyy is so keen to dial down the rhetoric. So far, Ukraine's currency, the hryvnia, has held up fairly well, losing less than 10% of its value against the euro in recent weeks. Though that has not happened without help from the central bank, which has spent over a billion euros to halt the currency's slide. The most relevant knock-on effect for the economy up till now, says analyst Sergey Fursa, has been on Ukraine's ability to borrow money on international markets. In the current situation, bond auctions would be bound to fail, says Fursa.

Anecdotal evidence is mounting that international companies are putting investment plans in Ukraine on ice as some businesses already in the country follow Western embassies' lead and evacuate personnel from the Ukrainian capital. Quantifying the value of such lost investments is difficult. However the current escalation plays out, analysts warn that lasting uncertainty about Ukraine's security could prove to be a permanent brake on the country's economic development.

Is there a Russian 'false flag' plan?

Is there an upside for Ukraine?

In the space of just one week the leaders of Turkey, Britain, and the Netherlands have made their way to Kyiv; all of them came with promises of military supplies. It was an unprecedented show of support and something Kyiv would, in normal times, have celebrated as a diplomatic victory. As things are, it was largely taken for granted. Ukraine is well and truly on Europe and NATO's agenda, with Ukrainian fears about Russia being taken seriously — too seriously, as it turns out, for Zelenskyy's liking.

Ukraine has received weapons and pledges of future deliveries not only from the United States, but also from other NATO countries such as the UK, which had previously stopped short of providing lethal weapons. But that does not change the fact that the value of the equipment being supplied to Ukraine is still comparatively modest compared to equivalent support by the US for Israel or Afghanistan before last year's Taliban takeover. As for NATO membership, the alliance has refused to rule out membership for Ukraine, but it also has not done anything to give Kyiv a clear pathway to membership in the short or medium term.