Despite claims of a Russian pullback, the US president said Moscow has moved "more troops" toward the Ukrainian border. In response, Moscow denied plans of an invasion.

Biden: 'They have not moved any of their troops out'

US President Joe Biden said Thursday that there is a "very high" risk Russia will invade Ukraine in the coming days.

"We have reason to believe that they are engaged in a false flag operation as an excuse to go in," the US leader said.

Biden's comments come amid reports that Ukrainian forces and pro-Moscow separatists exchanged fire in the east of the country.

"Every indication we have is they’re prepared to go into Ukraine and attack Ukraine," Biden said as he left the White House.

Ukrainian Foreign Minister Dmytro Kuleba said on Thursday that separatists had fired a tank from "temporarily occupied territories of Ukraine, which are controlled by Russia" in the eastern Luhansk region.

The Ukrainian military said a shell hit a kindergarten, wounding two teachers, and denied claims it fired back into separatist-held territory.

At NATO headquarters in Brussels, US Defense Secretary Lloyd Austin said that Russia was flying in more combat and support aircraft.

"We see them sharpen their readiness in the Black Sea," Austin said.

"We even see them stocking up their blood supplies ... I was a soldier myself not that long ago. I know firsthand that you don't do these sorts of things for no reason. And you certainly don't do them if you're getting ready to pack up and go home," said Austin, a retired Army general. 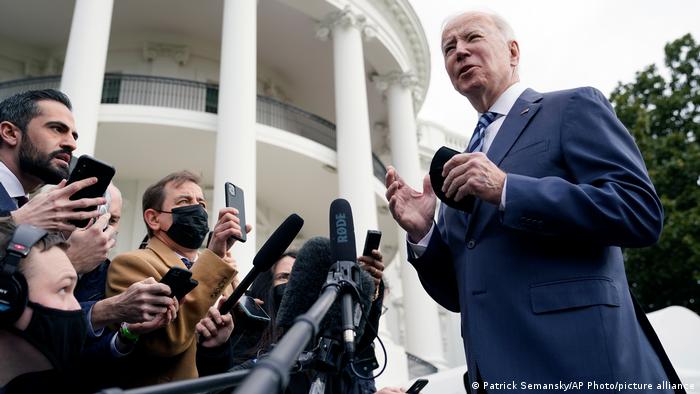 Earlier Thursday, Russia's Foreign Ministry said in a statement there is "no 'Russian invasion' of Ukraine, which the US and its allies have been announcing officially since last fall, and it is not planned."

However, at the same time, Russia also said it could respond militarily if Washington does not meet Moscow's security demands,  including a ban on Ukraine joining NATO and drawing down US troops in central and eastern Europe.

"In the absence of will on the American side to negotiate firm and legally binding guarantees on our security from the United States and its allies, Russia will be forced to respond, including with military-technical measures," the Russian Foreign Ministry said.

Amid the heightened tensions, the United Nations Security Council convened Thursday for a meeting on Ukraine.

US Secretary of State Antony Blinken, who changed travel plans at the last minute to speak at the meeting, said that US intelligence shows Russian forces are preparing to attack Ukraine in the "coming days."

Blinken said the potential invasion is a "moment of peril" for millions of people. He said Russia's targets in Ukraine include the capital, Kyiv.

He also warned that Russia would attempt disinformation campaigns through state media to spread "false alarms" and carry out a "fake or real" attack to claim a pretext for invasion.

"Russia may describe this event as ethnic cleansing or a genocide," he said.

Blinken said, without going into detail, that an invasion would include barrages of missiles, cyberattacks, followed by Russian troops advancing on "key targets that have already been identified and mapped out."

"The Russian government can announce today with no qualification of equivocation or deflection, that Russia will not invade Ukraine," Blinken said.

"State it clearly, state it plainly to the world, and then demonstrate it by sending your troops, your tanks, the planes back to their barracks and hangars and sending your diplomats to the negotiating table," he added.

Russian Deputy Foreign Minister Sergei Vershinin told the UN Security Council that the scenarios Blinken described were "regrettable and dangerous" and reiterated Moscow's claims that some Russian troops were returning to their bases.

The US Secretary of State said he had already sent a letter to Russian Foreign Minister Sergey Lavrov, asking him to meet next week to discuss the crisis.

Stoltenberg: 'So far we have not seen any sign of withdrawal'

Biden: 'They have not moved any of their troops out'