′Thank you for the helmets′: Ukrainians demand more from Germany | Germany | News and in-depth reporting from Berlin and beyond | DW | 13.02.2022

'Thank you for the helmets': Ukrainians demand more from Germany

Ahead of talks between German Chancellor Olaf Scholz and Russian President Vladimir Putin, members of Berlin's Ukrainian community took to the streets of the German capital with their demands. DW's Kate Brady reports. 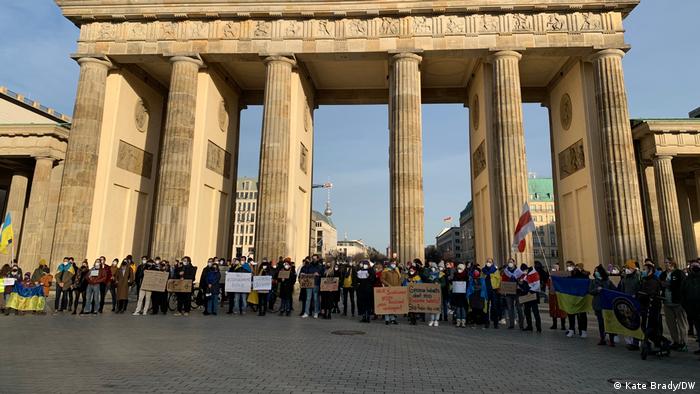 It's a rare sunny winter day in central Berlin. Chants of "Slava Ukrayini!" (Glory to Ukraine) ring out from demonstrators gathered behind the Brandenburg Gate. In the late afternoon, the low sun over Tiergarten park reflects off the pots, pans, colanders and sieves being worn as helmets by Ukrainians.

Around 200 protesters, many of them waving blue and yellow Ukrainian flags or fashioning them as capes, demanded more action from the German government in resolving the Ukraine crisis. The demonstration's motto of "Thank you for the helmets" and the satirical choice of headgear is a swipe at the German government's recent delivery of 5,000 helmets to Ukraine, as well as its decision not to send requested defensive weapons to the country as over 100,000 Russian soldiers mass near the border. 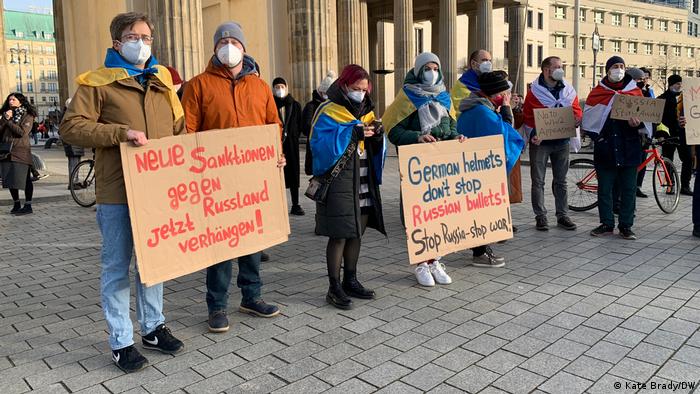 Sunday's demonstration comes just a day ahead of German Chancellor Olaf Scholz's visit to Kyiv on Monday, after which he's due to hold talks with Russian President Vladimir Putin in Moscow on Tuesday. Expectations among Western allies are limited, but protesters in Berlin have their own demands of the chancellor.

Vitali Olijnik, 52, has lived in Germany for almost 30 years. He says Germany's reluctance to provide defensive weapons "plays into the Russian game."

"This neutrality on defensive weapons isn't helpful," Olijnik says. "It's helping Russian military power be big and overpowering towards Ukraine. The economic support that Germany has provided to Ukraine has been a big help. But at this point in time, further means are necessary. As we say in Ukraine: 'You need a spoon to eat your lunch.'" 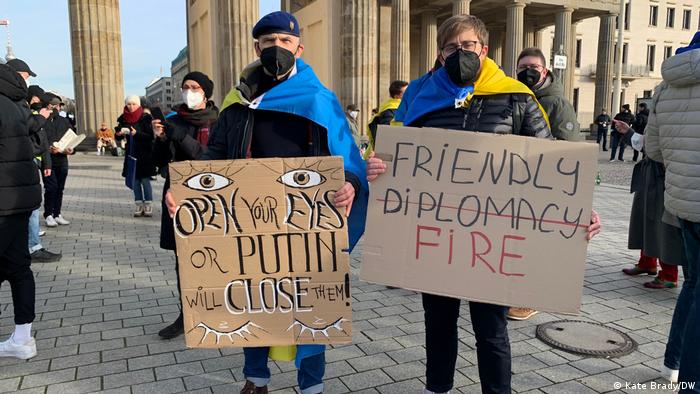 Ahead of Scholz's trip, 30-year-old Artur, who moved to Berlin eight years ago, says he wants to see a swifter response from the German government.

"Perhaps the sanctions (against Russia) should already happen now, because at some point, it's going to be too late," says Artur. "I'm lucky that most of my family is here. But you can see that people are anxious. Living here, there's not much I can do, so I can only offer emotional support. But it's also important that we stay calm and not build up any mass hysteria."

Artur's comments echo those heard in recent days from Ukrainian President Volodymyr Zelenskyy. The Ukrainian leader said the biggest enemy now was panic, and called for calm after the US said there was an "imminent" threat of Russian military action.

Many Ukrainians attending Sunday’s demonstration say relatives and friends have adopted what one protester described as a "keep calm and carry on attitude."

Eighteen-year-old Debbie, who was born in Berlin to Ukrainian parents, says that after eight years of conflict, relatives in Ukraine are tired: "A lot of people just don't want to hear the news anymore. This conflict isn't new and we shouldn't forget that." 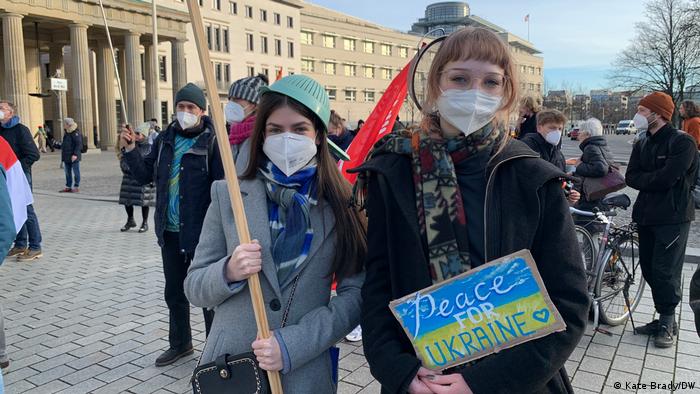 'Peace for Ukraine': Demonstrators Debbie and Ljuba demonstrated in 'a sign of solidarity'

Numerous placards at the demonstration also criticize Berlin's hesitance to pull the plug on the Nord Stream 2 gas pipeline. Although not yet up and running, the pipeline, which runs from western Russia to northeastern Germany, has been under fire from the outset. Critics, including the US and France, warn that Germany and Europe will be too reliant on Russia for gas.

"Everything here seems to come back to Nord Stream 2. And that needs to change," says 21-year-old protester Leah Dorotiak. "Germany needs to stand firm and strong, and not focus purely on economic ties with Russia. I also think it’s problematic that because of its history, Germany isn't as bold as it could be when it comes to speaking out against injustices in the world."

Germany's reserved stance compared to other NATO allies has left some Ukrainians in Berlin, like 37-year-old Ruslan, with mixed feelings about the place they now call home.

"On the one hand, I live in a country that isn't really standing up against this (Russian) aggression. But on the other hand, there’s stability here for Germans and other people living here like me," he says.

"But I think Germany should already be pushing to impose sanctions on Russia and not be waiting until Russia invades Ukraine." 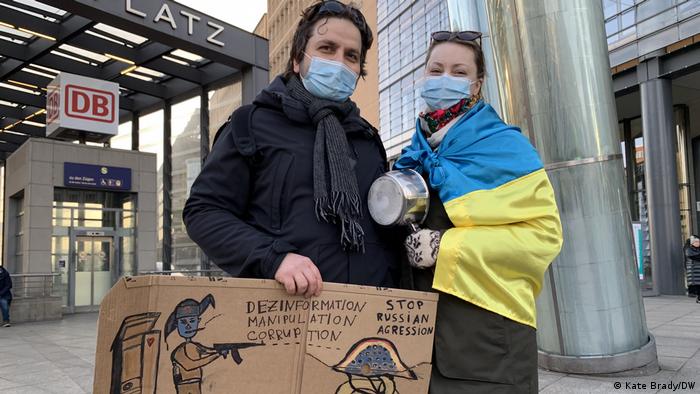 Some members of the Ukrainian community, however, are less critical of the German government. Sergej Fortunjew Steuer, a doctor and volunteer at Ukraine Hilfe Berlin, a group that helps Ukrainians and care facilities in need, has lived in Germany for 30 years. He, and others like him, chose not to attend Sunday’s protest.

"To me, it seems that it's the generation that's been here longer that has a different, maybe deeper, understanding of when and why Germany does and doesn't take action," says the 55-year-old.

"Even this step of sending 5,000 helmets is a significant step. Not so long ago, that wouldn't have happened at all. But instead, the delivery of the helmets is immediately seen as a bad joke."

Fortunjew Steuer provided medical assistance in the Donbas region in winter 2015. Right now, he says, he wouldn’t return to the frontline should the situation escalate.

"Friends have asked me, and I firmly say, 'No.' I have a 5-year-old now, too. But who knows? How can we really say what we'll do until the time comes?"

While some Ukrainians took to the streets to make their voices heard on Sunday, a quieter group turned to the church on Saturday at an ecumenical service "for peace in Ukraine."

Ukrainian Ambassador to Germany Andrij Melnyk was among those in the congregation. More events are planned across the Ukrainian community in the coming days and weeks.