Ahead of his talks in Kyiv and Moscow next week, German Chancellor Olaf Scholz has warned Russia of tough penalties if it invades Ukraine. The US has said a military offensive by the Kremlin could happen "any day." 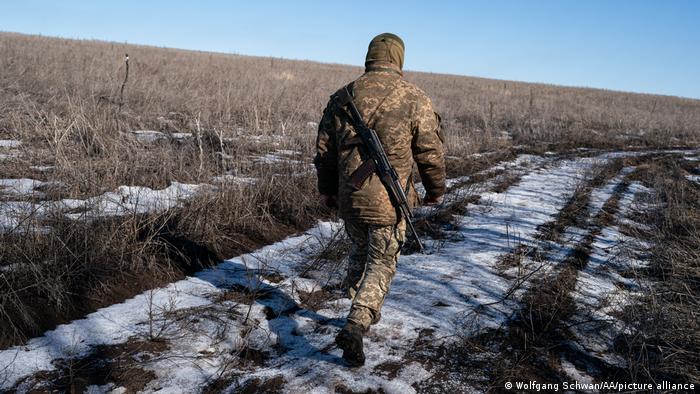 Scholz was speaking on the eve of a trip to Kyiv and Moscow for talks as the prospect of military conflict looms large.

Der Spiegel news magazine reported Friday that the Russian military, which has more than 100,000 troops near Ukraine, could invade on Wednesday, citing intelligence sources. US officials on Sunday said they could not confirm the report.

"We cannot perfectly predict the day, but we have now been saying for some time that we are in the window, and an invasion could begin — a major military action could begin — by Russia in Ukraine any day now. That includes this coming week before the end of the Olympics," White House national security adviser Jake Sullivan told CNN's "State of the Union."

Russia denies having any plans to invade and says its actions are a response to aggression by NATO countries.

What did Olaf Scholz say?

"In the event of a military aggression against Ukraine that threatens its territorial integrity and sovereignty, there will be tough sanctions that we have carefully prepared and which we can immediately put into force, together with our allies in NATO and Europe," Scholz said.

The German leader didn't go into specifics, but the US and EU have previously warned of the prospect of targeting Russian banks for sanctions. The new Nord Stream 2 gas pipeline, which is awaiting German regulatory approval to deliver Russian gas to Europe under the Baltic Sea, could also be shelved.

Scholz is set to meet Ukrainian President Volodymyr Zelenskyy on Monday and Russian President Vladimir Putin on Tuesday, but a German source said Berlin did not expect "concrete results" from those talks.

The chancellor would make clear the West was united and any aggression would prompt "painful, considerable sanctions" on Russia, the source told Reuters news agency.

Scholz's deputy chancellor and Economy Minister Robert Habeck reiterated Sunday that Europe may be on the verge of war, telling broadcasters RTL/NTV that "it is absolutely oppressive and threatening."

Speaking shortly after re-election as German president on Sunday, Frank-Walter Steinmeier called for Putin to "untie the noose around Ukraine's neck."

Steinmeier went on to say: "Peace cannot be taken for granted. It must be worked on in dialogue and when necessary, with clear words, deterrence and determination."

While German presidents have little executive power, they aspire to be moral authorities above daily politics.

Hopes for a diplomatic breakthrough

Speaking in Hawaii on Saturday, US Secretary of State Antony Blinken said diplomacy could still resolve the standoff but added that the risk of a Russian invasion was high enough to warrant pulling US embassy staff out of Kyiv.

"The diplomatic path remains open. The way for Moscow to show that it wants to pursue that path is simple. It should deescalate, rather than escalate," Blinken said.

Several other countries, including Germany, have advised their citizens to leave Ukraine.

A flurry of meetings and phone calls in recent days between top Western and Russian officials has produced no sign of a breakthrough to resolve weeks of escalating tensions over Ukraine.

What young Ukrainians think about tensions with Russia

In an hour-long call on Saturday, US President Joe Biden told Putin that the West would respond decisively to any invasion, adding such a step would produce widespread suffering and isolate Moscow.

A senior Biden administration official said the call was substantive but that there was no fundamental change in the crisis.

Putin has said Russia wants security guarantees from the West that include blocking Ukraine's entry into NATO, refraining from missile deployments near Russia's borders and scaling back NATO's military infrastructure in Europe to 1997 levels.

British Defense Secretary Ben Wallace cautioned against putting too much hope in talks, saying there was "a whiff of Munich in the air from some in the West," referring to a 1938 pact that failed to halt German expansionism under Adolf Hitler.

"The worrying thing is that, despite the massive amount of increased diplomacy, that military build-up has continued," he told The Sunday Times newspaper.

Since the annexation of Crimea in 2014, Germany has sent €2 billion ($2.3 billion) worth of bilateral financial aid, more than any other country.

The two countries are still at odds over the delivery of "lethal" weapons to the crisis zone, which Berlin refuses as a matter of principle, in line with the policy the country has pursued following World War II.

In an interview with German public radio on Sunday, Ukraine's ambassador to Berlin Andrij Melnyk called on Scholz to announce an aid package in the "billions" when he visits Kyiv.

Ukraine crisis: What can the US expect from Germany?

With Russian forces massing on Ukraine's border, the White House has sharpened its rhetoric. What can Germany bring to the table? From Washington, DW correspondent Oliver Sallet analyzes the situation.