Amid Ukraine-Russia tensions, German Vice Chancellor Robert Habeck has addressed concerns about the Nord Stream 2 gas pipeline. "These days, energy policy is always geopolitical," he said on a visit to Warsaw. 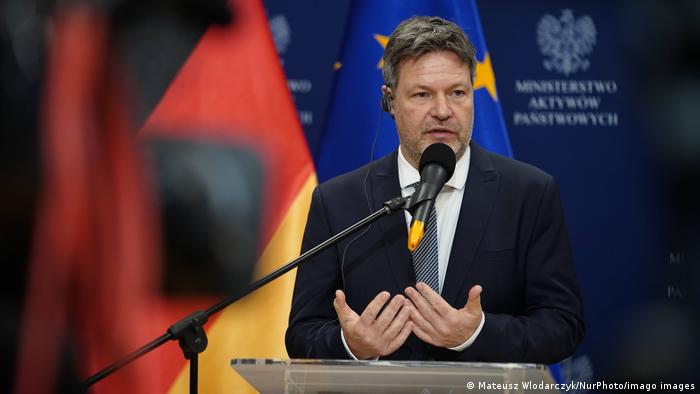 Habeck said sanctions would affect those leveling them but added, "We are talking here about war in Europe."

German Vice Chancellor and Economic Affairs and Climate Action Minister Robert Habeck on Friday suggested that final approval of the Nord Stream 2 pipeline — which will bypass traditional transit countries Poland and Ukraine and deliver gas directly from Russia to Germany across the Baltic Sea — will depend on developments in the ongoing crisis between Russia and the West over Ukraine.

Sasin said he was very happy to hear that Habeck was not simply considering the economic side of the project.

"It's an investment that continues to cause great worry in Poland," Sasin said. "It is, in our opinion, not only a threat to Poland's energy security but also to Europe's."

Habeck told reporters in Warsaw that Europeans should be very concerned about the ongoing situation in eastern Ukraine. Like many, he also warned of punishing sanctions should diplomacy fail and Russia resort to further escalation.

He also acknowledged that sanctions would not just hit Russia but would fall back on those doing the sanctioning, too.

"Basically, there are no conceivable sanctions that wouldn't affect Germany, France, the US and Europe, too," he said. "But we are talking here about war in Europe ... meaning such considerations have to take a backseat."

Germany has taken heat from allies for willingly putting a portion of its energy security in the hands of Russian President Vladimir Putin at a time when he has tested Western resolve and shown himself eager to divide Europe while at the same time invading neighboring countries, even going so far as to annex Ukraine's Crimean Peninsula in 2014.

Currently, Russia has amassed heavy arms and an estimated 130,000 troops at its border with Ukraine and has more recently begun conducting war games with Ukraine's northern neighbor Belarus, a Russian client state run by Putin ally Alexander Lukashenko. The two are conducting maneuvers on land as well as in the Black Sea, essentially encircling Ukraine.

The physical Nord Stream 2 pipeline has been completed but has not gone into operation. It awaits delayed approval from the German Federal Network Agency. Should Germany award final approval in the second half of 2022, certification would then be reviewed by the European Commission.

When German Chancellor Olaf Scholz visited the White House this week, US President Joe Biden made it very clear that the €9.5 billion ($10.8 billion) pipeline deal would be dead if Russia were to invade Ukraine.

If Russia invades Ukraine, Nord Stream 2 'is just not going to happen': Biden