US says Russian invasion of Ukraine could come at any time

New US intelligence suggests Russia could attack Ukraine before the end of the Olympics next week. The news comes after the US and European nations told their nationals to leave the country. 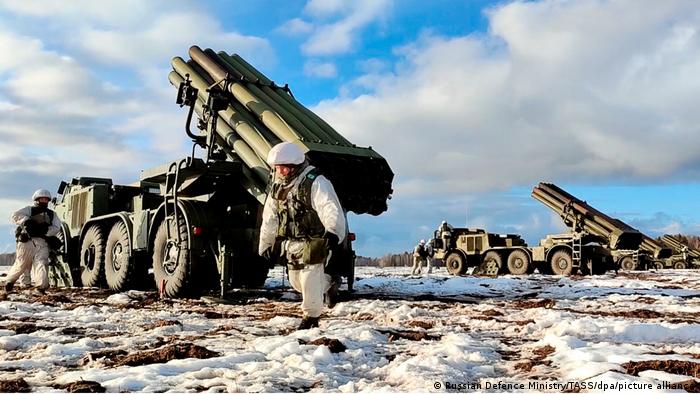 Countries across Europe have readjusted their security plans as the US stepped up its warnings about the potential for a Russian invasion of Ukraine.

US officials said intelligence shows Russia could be planning to attack Ukraine before the end of the Olympics next week.

With tensions spiking, Washington has announced that President Joe Biden and Russian President Vladimir Putin are set to speak by phone on Saturday. Talks between Putin and French President Emmanuel Macron are also expected.

What has the US said?

On Friday, more Western nations called for their citizens to leave Ukraine after US national security adviser Jake Sullivan said a Russian invasion of Ukraine could start any day, and would likely begin with an air assault.

White House press secretary Jen Psaki told a regular briefing: "We recognize that if President Putin were to decide to invade, that this would make it a very difficult circumstance on the ground for American citizens.

She added that the White House wanted to be "very clear and direct" about "the risks that would be posed to any civilian if they remain in the country."

US, Russia boost troops all around Ukraine

US Secretary of State Antony Blinken said on Friday that Russian forces could invade Ukraine "at any time."

"We're in a window when an invasion could begin at any time and to be clear — that includes during the Olympics," Blinken said during a visit to Australia.

In a call with his Ukrainian counterpart, Dmytro Kuleba, Blinken stressed that Washington continues to support Kyiv's "sovereignty and territorial integrity."

How have European leaders reacted?

German Chancellor Olaf Scholz spoke with Biden, Macron and Canadian Prime Minister Justin Trudeau — with the leaders reaffirming the need for strong and swift sanctions in the event of an invasion of Ukraine.

"The allies are determined to jointly take swift and deep sanctions against Russia, should there be further violations of Ukraine's territorial integrity and sovereignty," Germany's government spokesperson said on Twitter.

"All diplomatic efforts are aimed at persuading Moscow to de-escalate. The aim is to prevent a war in Europe."

Scholz is due to travel to Kyiv on Monday "to discuss joint and decisive actions to counter threats," Ukrainian Foreign Minister Kuleba said on Twitter.

Macron, who traveled to Moscow and Kyiv this week in an effort to break the impasse, has said he will speak with Putin again on Saturday.

Western leaders, including Macron, agreed to prioritize "diplomacy, dialogue, and deterrence to achieve de-escalation," the French presidency said in a statement.

Late Friday evening, Russia's Foreign Ministry reacted to the statements, saying Western countries were using a willing media to spread false information that Moscow may be planning to invade Ukraine. A statement on the ministry's website insisted the West was trying to distract from its own aggressive behavior.

"We want the Germans to recognize the seriousness of this situation, and that we will be helped — hopefully with defensive weapons, but also by economic support," Melnyk said on Welt TV.

The ambassador said the weapons would not necessarily be used in the field but could offer added leverage in negotiations with Putin.

"We are not suicidal, but we have to know that if this terrible scenario has to happen, the price for Mr. Putin and his soldiers would be so high so this war might still be averted," he said.

He said Kyiv expects Germany to set a course for Ukraine to have a chance of immediately joining the EU, insisting that NATO membership for Ukraine should also remain on the table.

What is happening on Europe's eastern flank?

Canada, Estonia, Denmark, the United Kingdom, Latvia, Lithuania, Australia and New Zealand have joined Norway, the Netherlands and the US in calling for their citizens to leave Ukraine. The European Union mission to Ukraine has also advised nonessential staff to leave the country.

Meanwhile, Ukraine said Russia have withdrawn maritime restrictions around the Sea of Azov, east of Crimea.

Stoltenberg: 'We can deploy more forces on short notice'

Russia had said the country's naval drills in the Sea of Azov, the waterway beside the disputed Crimean Peninsula which Russia annexed from Ukraine in 2014, would disrupt maritime traffic.

Officials in Ukraine had criticized Russia's planned naval exercises, calling it part of Russia's hybrid war against Ukraine. Russia is also conducting drills in Belarus on Ukraine's northern border, raising the consternation of US and NATO forces.

Uncertainty about Putin's intentions is a part of the Kremlin's plan, according to Oleksiy Melnyk, co-director of foreign relations and international security programs at Ukraine's Razumkov Centre.

He told DW that Putin is playing "a big geopolitical game" with NATO and the United States.

"Ukraine, unfortunately, is in the epicenter of that game," he said.

What has happened to adjust Europe's security posture?

The US military announced plans Friday to reposition a squadron of F-16 warplanes into Romania from Germany "to reinforce regional security." The planes will be stationed at the Fetesti air base less than 60 miles (100 kilometers) from the Black Sea, joining Italian warplanes already there.

The US is also sending an additional 3,000 troops to Poland to bolster NATO forces stationed there.

Germany is sending six advanced artillery systems to Lithuania on Monday to strengthen an existing German-led NATO enhanced forward presence battalion. Earlier this week, Germany announced it was also beefing up its presence in the Baltic state with an additional 350 soldiers.

Finland, a non-NATO member state that works closely with the alliance, has sealed a deal for 64 radar-evading Lockheed Martin F-35 stealth fighter jets.

What else has occurred in Ukraine?

In January, the UK said Murayev was one of the Kremlin's candidates to lead a Moscow-backed puppet government in Kyiv in the event of a renewed military offensive against Ukraine. Murayvev mocked the British claim as "stupid," and the Kremlin dismissed it as disinformation.

How reliable is Germany?

Washington, Berlin, Kyiv, Moscow — Germany's chancellor is on a diplomatic offensive. But things aren't simple for the foreign policy novice.

What is NATO and why was it created?