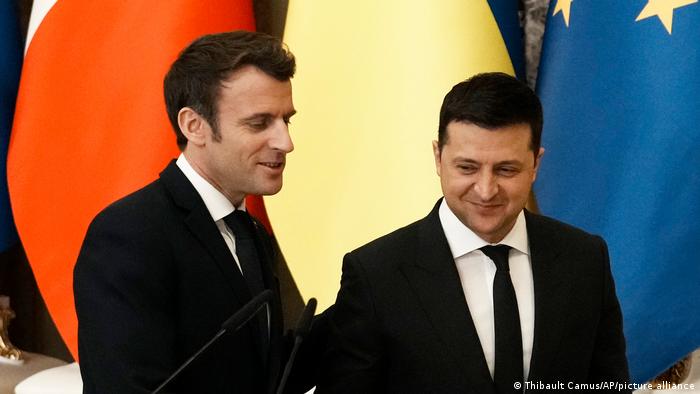 Macron is one of numerous politicians working feverishly to diffuse tensions between the neighboring countries.

Ahead of the visit, Ukraine Foreign Minister Dmytro Kuleba said Kyiv was "open to dialogue and looking for a diplomatic solution, but we will not cross our red lines and no one will be able to force us cross them."

What was said between Macron and Zelenskyy?

After the two leaders met Tuesday, they addressed reporters, with Macron underscoring the need for cool, saying "calm is needed in words and actions," otherwise, "there is a risk of escalation."

The French president voiced optimism after meetings with both Putin and Zelenskyy, saying he believes "there can be concrete solutions" to the crisis and highlighting the central role of the 2015 Minsk Protocol aimed at ending the war in eastern Ukraine — which he said both Putin and Zelenskyy confirmed they would respect — as the "best means to protect Ukraine's integrity."

Speaking alongside Macron, Zelenskyy told reporters, "We expect that in the near future ... we will be able to hold the next talks between the leaders of the Normandy quartet," he said, referring to a group consisting of Ukraine and Russia, and Minsk Protocol mediators Germany and France.

The French leader later told reporters that presidential advisors from all four Normandy format countries would meet in Berlin Thursday to plot a path forward.

"It will take time to get results," Macron said, adding: "We cannot resolve this crisis in a few hours of talks. It will be the days and the weeks and the months to come that will allow us to progress."

Here, too, Macron lauded the Minsk Protocol as "the only path allowing [us] to build peace ... and find a sustainable political solution."

Macron also quoted assurances from Putin that Russia would not establish any "permanent bases" or "deployments" in Belarus, where Russia has currently deployed 30,000 soldiers to conduct military war games. The Russian Ministry of Defense on Tuesday also confirmed that six large naval vessels had been dispatched from the Mediterranean to the Black Sea via Turkey to participate in the exercises.

Though the Ukrainian leader welcomed Macron's reports of Putin's willingness to de-escalate, saying "Openness is always great, if it's true, and not a game," he also voiced skepticism, noting: "I do not really trust words. I believe that every politician can be transparent by taking concrete steps."

What happened when Macron met Putin?

Putin called Monday's talks "useful, substantial and business-like," noting that some of Macron's suggestions may offer a path for mutual progress going forward. He also said the two had agreed to speak again after Macron has met with Zelenskyy.

Macron: 'We must always defend the unity of Europe'

Upon arrival in Kyiv, Macron told reporters Tuesday that Putin had given him assurances that he would not further escalate the situation: "I obtained [guarantees] that there will be no degradation nor escalation."

Moscow, however, quickly undercut Macron's claims of progress, with the Kremlin labeling statements that Putin promised not to carry out military exercises near the Ukraine border as "not right."

Putin has said that he hopes that the situation in Ukraine can be resolved peacefully and that Russia will "do everything to find compromises with the West."

However, he warned that if Ukraine joins NATO, and tries to retake Crimea — which Russia annexed in 2014 — European countries would be drawn into an armed conflict in which there would be "no winners."

"Do you want France to go to war with Russia?" Putin asked Macron.

The European Union's foreign policy chief, Josep Borrel, said Macron's visit to Russia brought "an element of detente" to the crisis, but did not amount to a "miracle."

"As far as people are willing to sit at the table and talk I think that there is a hope for not going into military confrontation," Borrell told reporters on Tuesday.

Macron is not the only European politician to travel to Kyiv. On Monday, German Foreign Minister Annalena Baerbock was there to meet with Czech, Slovak and Austrian counterparts for a two-day visit in an effort to de-escalate tensions.

On Tuesday, Baerbock visited frontline Ukrainian troops in the Donbas region to assess the military and humanitarian situation in the area.

Later on Tuesday, Macron is expected in Berlin for a meeting with Chancellor Olaf Scholz, who is returning from talks with US President Joe Biden in Washington, DC.

Foreign policy expert: 'Disunity' on Ukraine between Germany and US

What is the background to the Ukraine crisis?

Ukraine, a former Soviet republic, has expressed desire for closer ties with the West as well as NATO membership. Putin has complained that NATO's eastward expansion following the end of the Cold War has undermined Russia's security.

Russia currently has some 100,000 troops deployed near its border with Ukraine as well as a further 30,000 deployed to neighboring Belarus.

Responding to Western criticism of the Russian military buildup near Ukraine, Putin said, "NATO members consider it possible to lecture us about our troop movements in our own territory and cast them as a threat of Russian invasion in Ukraine," adding, "It is not us who are moving towards NATO's borders."

Moscow has repeatedly insisted it is not to blame for the current situation, demanding instead a number of Western security guarantees such as a promise to forego all eastward NATO expansion, as well as guaranteeing that Ukraine will never be accepted into the alliance, and the removal hardware and troops from Eastern Europe.

Armed conflict between Ukraine and the pro-Russian separatists broke out in the Donbas region in 2014. According to UN estimates, more than 14,000 people have been killed in fighting since the conflict began.

Scholz in Washington, Macron in Moscow for Ukraine talks

What is NATO and why was it created?

'No War': Celebrities call for de-escalation in Ukraine

In an open letter, celebrities from around the world have called for an end to Russia's aggression against Ukraine. The prominent signatories include Ai Weiwei, Herta Müller and Ian McEwan.