What is the ′Normandy format′ for resolving the crisis in Ukraine? | Germany | News and in-depth reporting from Berlin and beyond | DW | 26.01.2022

What is the 'Normandy format' for resolving the crisis in Ukraine?

Representatives of Russia, Ukraine, Germany and France have used what's known as the Normandy format to try to resolve differences. The hope is the talks can also find a way out of the current standoff. 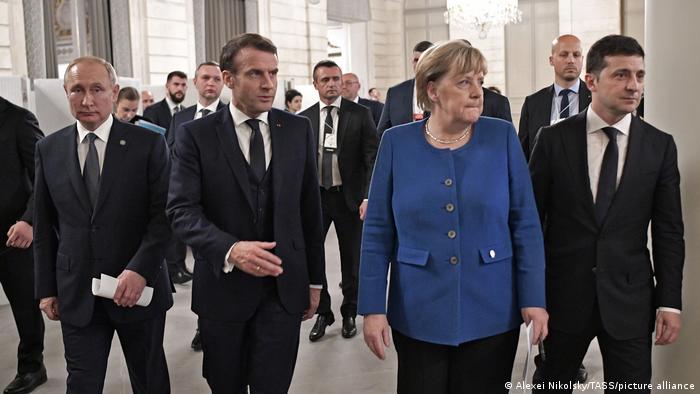 In June 2014, German, French, Russian, and Ukrainian officials met for the first time in a setting known as the Normandy format. It takes its name from the region in northern France, where leaders from the four countries sat together informally during the commemoration of the 70th anniversary of the allied landings along beaches there, which began the liberation of Nazi-occupied Europe in World War II.

Having the Russian and Ukrainian leaders together amid heightened tensions was already seen as a success. Little else immediately came of the gathering, but few expected it to. 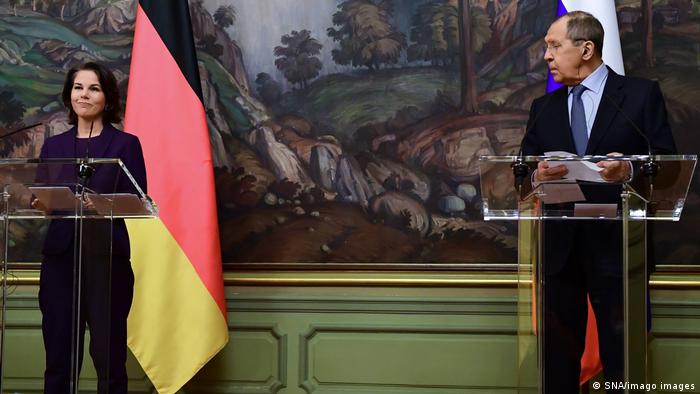 Early success with the Minsk Protocol

Over the next eight months, however, those talks led to the signing of the Minsk Protocol, named for the Belarusian capital where the signing took place. The negotiators from the Normandy group had intended to find an end to the deadly standoff between Russia and Ukraine.

"In Minsk, the essential players reached an understanding to lead to deescalation," said Thomas Kunze, the Russia commissioner for the Konrad Adenauer Foundation (KAS).

Among other aspects, Kunze said the agreement called for a cease-fire and removal of heavy weapons to be monitored by the Organization for Security and Cooperation in Europe (OSCE). It also included terms for local elections in Ukraine, led to prisoner exchange and allowed in humanitarian aid.

Both Russia and Ukraine have repeatedly accused the other of violating the Minsk Protocol. Critics have called it one-sided because it deals with the Ukrainian government and separatists in the east, but not Russia itself.

"That Russia isn't party to this conflict is a fiction," Henning Hoff, executive editor of the foreign policy publication, Internationale Politik Quarterly, told DW. "It's clear to the whole world that this fiction can no longer be sustained."

Two more Normandy format meetings took place with the four countries' leaders — in Berlin in 2016 and in Paris in 2019. Neither made much headway. By the time Ukraine's newly elected president, Volodymyr Zelenskyy, joined for the second gathering, the Minsk Protocol was considered on life support.

US plays a stronger role

Former German Chancellor Angela Merkel had been a driving force behind the talks, until she retired last year. Hoff said her role, however, while important, should not be overestimated.

"For sure her long experience and direct connection to Putin, with whom she could speak Russian, played a critical role in the Normandy negotiations," he said. "The format's success is not a matter of the people involved. It's about Russian-Ukrainian dialogue in a European context. Scholz and Macron, or whoever comes after them, could still help calm the conflict — if Putin wants that."

Critics have increasingly questioned Normandy because the United States was left out of those negotiations. Ukrainian officials expressed interest in a stronger US role, fearing Russia would otherwise get too much deference. For its part, Germany has hesitated to take a strong stance against Russia, whether threatening to kill the Nord Stream 2 gas pipeline or approve weapons deliveries to Ukraine.

"Progress when it comes to questions of strategic balance or transparency around military drills can only come about through US-Russian talks or the NATO-Russia Council," said Hoff. From the German perspective, he said the success of the Normandy format was getting Russian and Ukrainian governments talking directly to one another.

"Right now, the most important talks are with the US, NATO and the involvement of the OSCE. That's why it's also important that the Normandy format moves forward, as difficult as it is," Kunze from KAS said.

Whether that is possible, Hoff added, depends on what Putin actually wants.

"If Putin is really serious about his extremely far-reaching demands that the trans-Atlantic community could never accept, such as guaranteeing a Russian sphere of influence in Europe, there'll be no progress in this format," he said.

Nonetheless, he added, there is a chance for deescalation, despite the current fear of war.