Little optimism after Normandy format meeting | Europe| News and current affairs from around the continent | DW | 20.10.2016

Skepticism, renewed accusations and a little gloating. Reactions from Kyiv and Moscow after the Ukraine crisis meeting in Berlin offer little hope for a breakthrough. 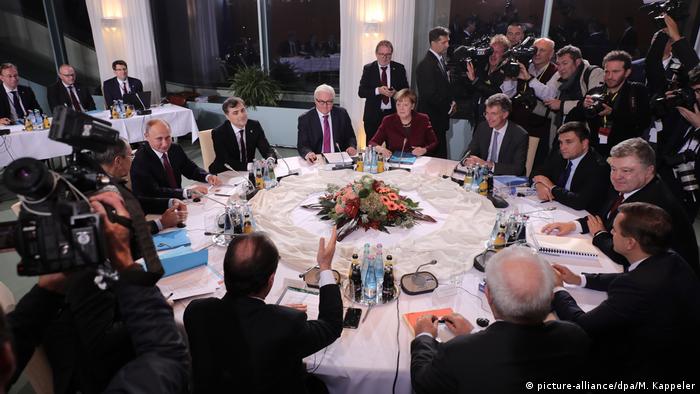 Don't give into pressure from the West. No political solution until there is a lasting ceasefire. This posture seems to have established itself as a consensus in Kyiv when it comes to the conflict with pro-Russian separatists in Eastern Ukraine and with the separatists' protector, Russia. It is from this perspective that the results of the so-called "Normandy format" summit in Berlin are being evaluated.

The West tried to get the Ukraine to pass a new law on local elections in the separatist Donetsk and Luhansk regions, parliamentarian Volodymyr Aryev of Petro Poroshenko's ruling party told DW Thursday. "But that won't be possible until security can be guaranteed," said the politician. He added that parliament will not vote on the issue until then.

Similar assessments could be heard coming from pro-Western opposition parties. "We know they are putting pressure on us," Oleh Bereziuk of the Ukrainian parliamentary party Samopomich (Self Reliance) told the news organization Interfax-Ukraine. The West is demanding that Ukraine take steps that will destroy its sovereignty, he said. His party is one of the most vocal critics of the Minsk agreements. He said he heard nothing new in Berlin which he considered to be positive. Leonid Yemez of Ukraine's second largest parliamentary group, the People's Front party of former prime minister Arseniy Yatsenyuk, wrote on Facebook that the party would maintain its opposition to elections in the separatist-held regions as well.

"Ukraine could make concessions, although not until there are significant security improvements," Kyiv foreign policy expert Oleksandr Sushko told DW. He also warned against overvaluing the Berlin summit's "Minsk Roadmap." "As soon as expert discussions begin, old problems like the sequence of measures will be back," said Sushko. 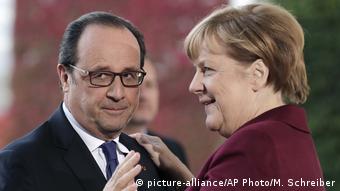 Roadmap by the end of November

The presidents of France, Russia and Ukraine met late Wednesday in Berlin to discuss the stalled peace process in Eastern Ukraine at the invitation of Chancellor Angela Merkel. The last such group-of-four meeting took place more than a year ago in Paris. Little has changed since then. Implementation of the 13 points of the Franco-German negotiated Minsk agreements from February 2015, has faltered. This is in large part because Kyiv refuses to grant broad autonomy to the so-called "People's Republics" and to afford them legitimacy by allowing them to hold local elections as long as the war in Eastern Ukraine continues. There are also a number of other sticking points from Kyiv's perspective, such as the withdrawal of foreign organizations - meaning Russian fighters - as well as the restoration of control of national borders.

It was agreed in Berlin that a roadmap with concrete steps and deadlines would be completed by the end of November. Further, it was agreed upon that troops would withdraw from a number of positions and that the deployment of observers from the Organization for Security and Co-operation in Europe (OSCE) would be expanded.

In Russia, old accusations were once again voiced after the Berlin summit. The general tenor: Moscow is doing its best to bring about peace in Eastern Ukraine, and Kyiv still isn't fulfilling its obligations. 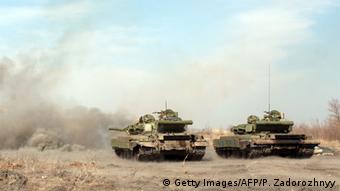 Yet, there were positive assessments. The Berlin meeting was proof that the Normandy format is still alive, wrote Konstantin Kosachev, head of the Committee for Foreign Affairs of the Federation Council. Russian President Vladimir Putin has voiced doubts about that fact in recent months.

"The fact that this four-nation format is still in place is positive," Alexander Gushchin of the Russian International Affairs Council (RIAC) told DW. Nevertheless, he says that the Berlin meeting did nothing to change opinions on either side of the conflict.

Separatists in line with Moscow

The Politician, Kosachev, did gloat a bit though. He wrote that finding a solution to the Syria conflict was "obviously more important" to the Europeans than finding one for the Ukraine conflict. Those who follow German media outlets will have certainly come away with the impression that Syria was front and center in Berlin despite Ukraine being given as the formal reason for the summit.

Pro-Russian separatists reacted to the Berlin summit much like Moscow. The ceasefire and the political process should go hand-in-hand said a representative for the separatists speaking in Moscow. Against that backdrop, a breakthrough in the ongoing Ukraine conflict seems unlikely to have gotten any closer after the Berlin summit.