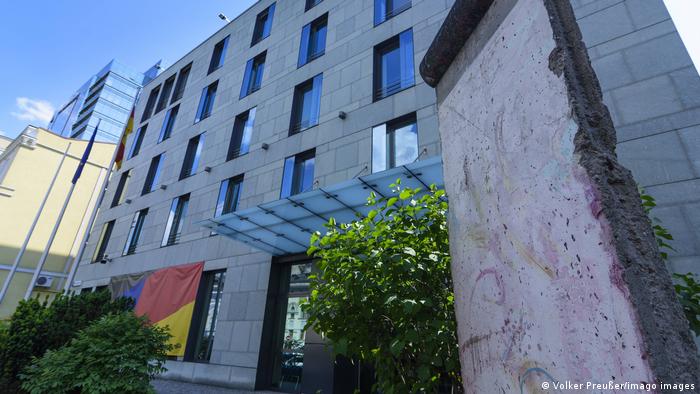 The German embassy in Kyiv is not being evacuated yet

For now, Germany has decided to hang on in the escalating situation: The Foreign Ministry announced on Monday that embassy staff in Kyiv, Ukraine, would not be evacuated — though it would cover the costs of any staff family members who wished to return to Germany.

Though the safety of staff was the German government's "highest priority," Foreign Minister Annalena Baerbock said, no moves would be made that might destabilize the situation any further. Earlier,the US had announced that would be slimming down its staff in Kyiv, allowing non-essential staff to leave the country if they wished. The US move was described as "exaggerated caution" by the Ukrainian government.

Baerbock's carefully-chosen words, made in consultation with the European Union, reflected the mediating course that Germany has been trying to steer between Russia and NATO for several years. 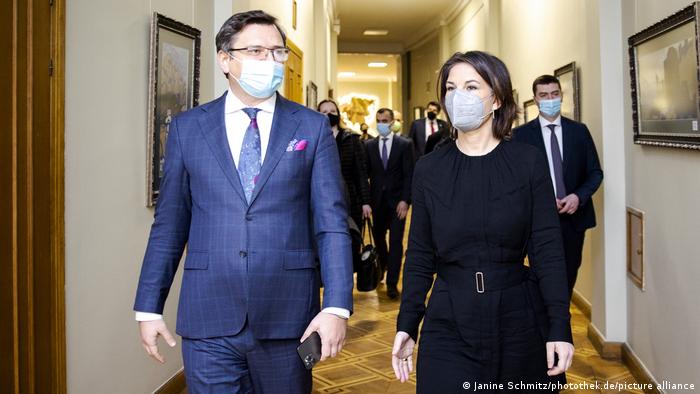 But the seriousness of the situation is not lost on Germany's veteran diplomats. Christoph Heusgen, a longtime security policy advisor to Angela Merkel and the future head of the Munich Security Conference, said that the region had been through a similar crisis in 2014 when Russia took Crimea.

"I do see that there is a danger of Russia invading again," he told DW's Michaela Küfner. "You see all the preparations for it: The media preparation in Russia, the military preparation and the demands — and we know they are not realistic demands — put forward by (Russian President Vladimir) Putin. So there is something cooking."

The answer, according to Heusgen, is unity amongst the Western international community. "What we want this time is to have this very strong, massive reaction put into the window," he said, "so that Russia knows exactly what happens if they actually take the step that Putin indicated they're ready to take."

Germany must play a key role in this, according to Heusgen. "Germany overall has assumed a more active role in world politics, and people are asking for this," he said. "There are lots of expectations that we play an important role and we do this. You know, I mentioned the Ukraine crisis. We do this when you look at the Balkans where we are very active."

Putin's fear of NATO's expanding spheres and the growing civil unrest in countries like Belarus and Kazakhstan appear to be driving the Russian leader to take an increasingly nationalist course.

But Russia has also made significant diplomatic gains, according to Thomas Kunze, head of the Moscow Office at the Konrad Adenauer Foundation, the German political foundation associated with the conservative Christian Democratic Union (CDU).

Nor is all hope for peace lost. Agreements made during the Minsk peace talks have shown that there is room for compromise, according to Kunze. "A lot was agreed," said Kunze. "From ceasefire to the withdrawal of heavy weapons; OSCE monitoring; a dialogue and the methods local elections in Ukraine were adopted; prisoner exchange, humanitarian aid and much more. There is a lot there to build on — if you de-escalated."

Similarly optimistic is Reiner Schwalb, a former military attaché at the German embassy in Moscow, who in December initiated an urgent call for de-escalation as tensions increased in Ukraine. Schwalb believes Germany is key to the current diplomatic efforts. "Berlin is a point of contact between Europe and America from the American perspective," he told DW's Matthias von Hein. "Despite our history, the German-Russian relationship has a certain stability. There is a great economic exchange, with cultural exchange and scientific exchange, and repeated attempts by Germany to cooperate more intensively with Russia."

Schwalb believes Russia sees Germany as a positive influence. "They basically accept German policy, including our focus on human rights and values," he said. "They just don't want their own system interfered in."

On the question of what diplomacy actually means, Reiner Schwalb likes to quote his former boss, the former ambassador to Moscow, Rüdiger von Fritsch. Diplomacy, von Fritsch said, is "climbing the same wall over and over again; and when you've fallen down 20 times, you try it a 21st time." The retired brigadier general added that the important thing is to keep looking for new places to climb up. "Climbing up the same one over and over again makes no sense".

While you're here: Every Tuesday, DW editors round up what is happening in German politics and society. You can sign up here for the weekly  newsletter "Berlin Briefing."

Germany has declined to join allies such as the US and UK in shipping weapons to Ukraine. The country faces an unpredictable buildup of Russian troops on its borders — and there is precedent for armed aggression.

Who is Germany's Annalena Baerbock?

Germany's new top diplomat emphasizes a "values-guided" foreign policy. But what inspired those values, and can the Green co-leader back them up in one of the most high-profile offices?