The US, UK and Australia have told the families of its diplomats in Kyiv to leave Ukraine amid concerns about a potential Russian invasion. Germany said it would also help its citizens leave if they wish. 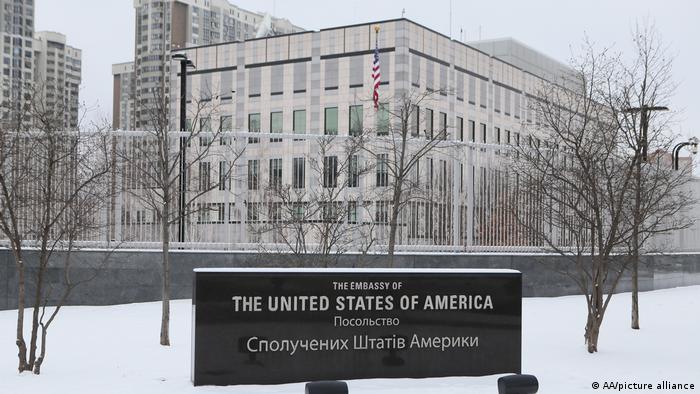 Several Western countries cautioned against travel to Ukraine and moved to pull the families of their diplomatic staff out of the country on Monday, following a similar move by the United States.

The growing list of countries calling on citizens to leave the country comes amid mounting tensions over Russia's military buildup on the border with Ukraine.

On Sunday, the US State Department told the relatives of diplomatic staff stationed at the embassy in Kyiv to start leaving Ukraine.

US officials advised against traveling to Ukraine due to "increased threats of Russian military action" and COVID-19.

In a travel advisory published on its website, the State Department said that there were reports Russia is planning significant military action against Ukraine.

Besides ordering the departure of eligible family members of the Kyiv embassy staff, Washington also authorized the voluntary departure of embassy employees. According to the Associated Press (AP), their departure is at the US government's expense.

"The security conditions, particularly along Ukraine's borders, in Russia-occupied Crimea, and in Russia-controlled eastern Ukraine, are unpredictable and can deteriorate with little notice," the State Department's travel advisory said.

"Demonstrations, which have turned violent at times, regularly occur throughout Ukraine, including in Kyiv."

AP cited State Department officials as saying that the embassy will remain open and the announcement does not constitute an evacuation. They added that the move does not reflect an easing of US support for Ukraine and had been under consideration for some time.

What other countries are pulling embassy staff?

In addition to the US, the UK said on Monday that it is also withdrawing some embassy staff and their relatives from Ukraine due to the "growing threat from Russia."

Germany said that it would help embassy staff family members leave Ukraine if they wish — extending the offer to those working for German organizations like the Goethe Institute.

"This is a measure we are taking to ensure the safety of the people we are responsible for there," ministry spokesman Christopher Burger said on Monday in Berlin. He emphasized, however, that the embassy would continue to function.

The EU, meanwhile, has said it would not pull out the families of diplomats from the Eastern European country.

"We are not going to do the same thing because we don't know any specific reasons," EU High Representative for Foreign Affairs and Security Policy Josep Borrell said on Monday ahead of a meeting of EU foreign ministers in Brussels.

US Secretary of State Antony Blinken is expected to take part virtually in the EU meeting. Borrell suggested that Blinken would maybe provide additional information about the current security situation in Ukraine.

Kyiv residents weigh in on prospect of Russia-Ukraine war

How has Ukraine reacted?

The Ukrainian government labeled the US decision to pull out embassy families "premature" on Monday.

"We consider such a step by the American side premature and a display of excessive caution," Ukrainian foreign ministry spokesperson Oleg Nikolenko said.

What is the situation in Ukraine?

The US and UK announcements to withdraw embassy families comes in the wake of Western and Ukrainian concerns over Russia's military buildup along its border with Ukraine.

The NATO alliance on Monday announced it would send additional jets and ships to its deployments in Eastern Europe amid invasion fears. Denmark, for example, will deploy four F-16 fighter jets to Lithuania, with the US and other countries also ramping up support in the region.

On Saturday, the British Foreign Office claimed that Russia was seeking to install a pro-Russian leader in Ukraine, a claim which Russia called "misinformation."

Germany's defense minister Christine Lambrecht called for the de-escalation of tensions in a Saturday interview, adding that Germany would not supply arms to Ukraine.

Friday talks between the United States and Russia failed to produce any major breakthroughs on the issue.