Annalena Baerbock is getting a firsthand account of the humanitarian and military situation in eastern Ukraine. She is making the trip amid fears that Russia may invade its neighhor. 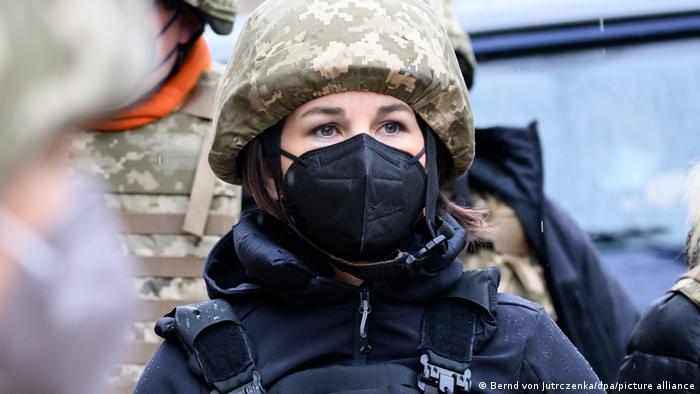 Baerbock is on her second visit to Ukraine in three weeks

Baerbock received a firsthand account of the humanitarian and military situation in the Donbas region. The Ukrainian government has been embroiled in an armed conflict with pro-Russia separatists since 2014.

What happened during Baerbock's visit to the front line?

Baerbock, dressed in a protective helmet and vest, spoke with a Ukrainian general about the situation in the region. She was in the area for around 40 minutes, and no violence occurred during her visit, according to a reporter from the German dpa news agency.

According to UN estimates, over 14,000 people have died in the conflict so far.

Germany's foreign minister toured the coastal village of Shyrokyne, which lies in the embattled Donetsk Oblast.

"Once a holiday resort, now a testimony to the fact that we have war in the middle of Europe," Baerbock said while surveying the town, which served as a battleground for over four months in 2015.

She appeared visibly shaken by the damage she witnessed in Shyrokyne. "Children's toys are lying on the side of the road, houses are destroyed," Baerbock said, while describing the scene as "very depressing."

Baerbock said it would be impossible "to solve this aggression from the Russian side militarily, so I am doing everything I can to make sure that we move forward step by step at the negotiating table."

Baerbock first landed in Ukraine on Monday, where she met Ukrainian officials in Kyiv. During her visit in the capital, she vowed solidarity with Ukraine, despite Berlin's refusal to send weapons to the country.

While meeting with Ukrainian Foreign Minister Dmytro Kuleba in Kyiv, she said Germany is willing to "pay a high economic price" if sanctions are required to be implemented against Russia.

Baerbock in Ukraine for talks to ease tensions

Germany's top diplomat is also expected to meet with representatives from the Organization for Security and Cooperation in Europe (OSCE) Special Monitoring Mission to Ukraine on Tuesday. The OSCE said in December that a cease-fire had been reached in the region, but there have been numerous violations in recent weeks.

Macron to meet Zelenskyy in Kyiv

French President Emmanuel Macron is also taking a trip to Ukraine on Tuesday, after he met with Russian President Vladimir Putin a day prior. Macron will meet with Ukrainian President Volodymyr Zelenskyy in Kyiv in a diplomatic push to de-escalate tensions.

Upon arrival in Kyiv, Macron told reporters that Putin had given him assurances that he would not further escalate the situation: "I obtained [guarantees] that there will be no degradation nor escalation."

Macron will also meet German Chancellor Olaf Scholz and Polish President Andrzej Duda in Berlin so he can take "into account Eastern European voices and positions in dealing with Russia, because in the past, Macron had been accused that he is too close to Russia," Austrian international relations professor Gerhard Mangott told DW on Tuesday.