Germany′s Olaf Scholz is in Washington amid Ukraine crisis | Germany | News and in-depth reporting from Berlin and beyond | DW | 06.02.2022 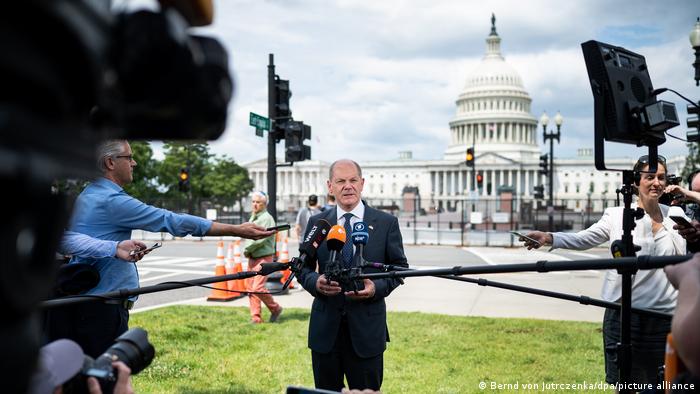 Chancellor OIaf Scholz last paid a visit to Washington in 2021, when he was still finance minister and vice-chancellor

There's a cloud of ambiguity hanging around Chancellor Olaf Scholz as he makes his first trip to visit President Joe Biden. In Germany, critics and social media jokers have been making snide remarks about Scholz's apparent reluctance to make forceful statements on the Ukraine crisis. ("Someone has to tell Scholz he's switched to mute," as one user remarked on Twitter.) NATO allies and Scholz's political opponents at home have expressed frustration at Germany's unwillingness to deliver weapons to Ukraine.

Scholz's cause hasn't exactly been helped by the pronouncements of his party colleague and predecessor as Social Democrat chancellor, Gerhard Schröder, a man never shy about publicly defending his friend Vladimir Putin: Schröder seemed to justify the Russian troop-buildup as reaction to NATO maneuvers while accusing Ukraine of "saber-rattling."

Meanwhile, the German media has speculated about cracks in trans-Atlantic relations: Der Spiegel reported in late January that Scholz had found no time in his busy schedule to meet with Biden. The story was quickly and vehemently quashed by the White House.

The chancellor himself appeared on public broadcaster ZDF on Wednesday night to flatly deny that he was being too passive and that NATO partners considered Germany unreliable: Not only was he working intensively with all NATO partners, he said, but he was planning a trip to Moscow to speak with Putin personally.

"Our allies know exactly what they have in us," he said. "We are those who make a very high military contribution as part of the defense alliance of NATO. Everyone knows exactly that for continental Europe, Germany is the country that makes very, very high expenditures in this regard." He also said that no other European country had offered Ukraine more economic help in the last few years than Germany.

Nevertheless, some political analysts feel Scholz now has to reassure Biden about whose side he's on. "The point is: Scholz can't come empty-handed," said Sudha David-Wilp, deputy director of the German Marshall Fund's Berlin office (GMF). "He has to change the status quo. Instead of being very taciturn, which is his style, he needs to come to Washington with a clear message why Germany is on board with the western alliance in this crisis vis-à-vis Ukraine."

David-Wilp said that Scholz and his foreign minister, the Green Party's Annalena Baerbock, might have found plenty of words about Germany's commitment to the transatlantic partnership and what she calls "the rules-based international system."

"But the inaction of Germany at the moment seems to negate all of the value-based foreign policy that this new government has touted," she told DW. "Angela Merkel was a crisis communicator, whereas unfortunately Scholz has been quite silent, and it's been very hard to interpret where he and his government stand on this issue." 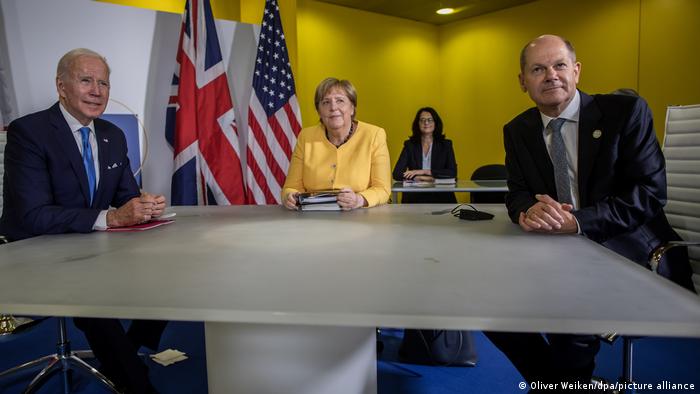 A better friend than Merkel?

For their part, the Social Democrats don't see any reason to worry about US-German relations. "Olaf Scholz is a committed transatlanticist, and our American friends know that, so it will be a meeting among friends," said Nils Schmid, foreign policy spokesman for Scholz's Social Democratic Party (SPD). "He doesn't have to make amends for anything."

In fact, Schmid argues that the Ukraine crisis has been marked by closer trans-Atlantic cooperation than the last international crisis: NATO's chaotic withdrawal from Afghanistan last summer.

That's also the view of Michael Werz, German analyst and senior fellow at the Washington-based Center for American Progress. "I don't think Olaf Scholz has to win back any trust, because he's a known entity here in the United States from his time as finance minister," Werz told DW.

For all the apparent disagreements about sending arms to Ukraine, Werz argues that Scholz's administration offers the US something that Merkel didn't: Common interests on larger ongoing issues such as China and climate change.

"The entire new German government, not only Olaf Scholz himself, has a more political [rather than a business-oriented] perspective on China when it comes to human rights, to international norms, to the need for figuring out a new equilibrium between economic interests and political standards," Werz said. "Especially with the Greens involved in government. I think that's a welcome step forward."

On climate change, many see Biden as closer to Scholz than he was to Merkel. Both Biden and Scholz are aware that they owe their election victories in part to a huge groundswell of young voters who see the threat of climate disaster as the defining issue of their lives.

Not only that, as Nils Schmid points out, both Biden and Scholz have made a point of framing climate protection in terms of economic policy, highlighting the potential to create new jobs in sustainable industries. This makes sense, given that both Germany and the US are countries whose economies rely on maintaining a competitive edge in modern industries.

So there's plenty for the two leaders to discuss: "There's a question of the EU and US finding common emissions reduction targets, so they can be 'in the same climate club,'" said Schmid. "There's a common interest in new technologies. Whether it's hydrogen, or solar cells, or energy storage technologies, the goal is to move forward on research and development together."

Washington has long been critical of Nord Stream 2, a natural gas pipeline between Russia and Germany that is ready to go into operation. It has been seen as one of the SPD's pet projects and Chancellor Scholz only recently confirmed that it would not go into operation in the case of an invasion.

So some would suggest that Biden has cut Scholz some slack over the Ukraine crisis. "The reason President Biden has been very patient with Germany, in the sense that he has told Congress to hold off on initiating further sanctions that could also hurt Germany," said David-Wilp of the GMF, "is because he sees Germany as a key player in the trans-Atlantic relationship, not only when it comes to climate change, but also in dealing with China."

Moreover, there might secretly be more sympathy in Washington for Scholz's position than might have been apparent in the tense atmosphere of the last few weeks.

"In the current heated discussion, you won't hear Washington officials make this argument publicly," said Werz, "but I think there's also an implicit appreciation of the fact that Olaf Scholz needs to A) deal with a small minority in his party that is more Russia-friendly than some of us would like, but B) because of that tradition within the SPD he has a greater credibility as an interlocutor vis-à-vis Russia."

In other words, perhaps sometimes a little ambiguity does no harm.

During its presidency of the group Germany plans to focus on major issues, with climate policy as the top priority. Dealing with the COVID pandemic and with Russia and China will definitely also end up on the G7 agenda.

German-Russian relations: A minefield of misunderstanding

The thorny issue of how to face up to Vladimir Putin's Russia is one of the biggest foreign policy challenges for Germany's new chancellor, Olaf Scholz, and Foreign Minister Annalena Baerbock.