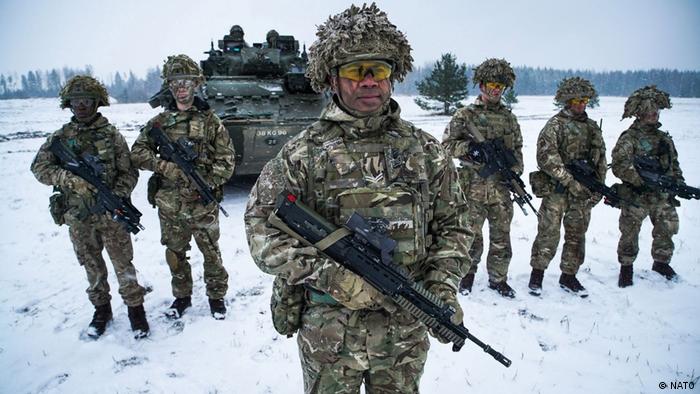 Romania has long wanted a NATO battlegroup on its territory, similar to those mustered for Estonia, Latvia, Lithuania and Poland after Russia's invasion of Ukraine in 2014.

Thanks in no small part to Moscow's renewed massing on Ukraine's border, the Black Sea nation is likely to see such a presence approved when alliance defense ministers meet in mid-February.

France has expressed interest in leading the new deployment, and this week French Defense Minister Florence Parly, on a visit to Bucharest, announced a group of experts was already arriving in Romania to begin mapping it out.

And Romania may not be the only eastern NATO ally to see new troops. The increased urgency comes as US, NATO and other Western officials have underscored that Russia continues to rapidly add forces and capabilities to its border buildup near Ukraine.

Russia is ready for anything

One intelligence official who spoke on condition of anonymity said the Kremlin had continued to deploy battalion tactical groups (BTG), which are highly-equipped battalions, "at great pace" even throughout the recent weeks of intensive diplomacy.

"It's not just that the numbers [of BTGs] are absolutely very high," the official said, "but this is now more than double where they were at the beginning of the year. We are increasingly now seeing many of the things that we would look for to indicate that a military option on their side is more feasible.

"Occupation, taking half the country, creating a land corridor from Crimea to Moldova and Romania are all things that I think are completely viable," the source said, "and likely are being actively considered."

NATO Secretary-General Jens Stoltenberg announced earlier this week that allies were putting forces on standby and sending ships and aircraft to bolster existing deterrence and defense measures, as they await the outcome of diplomatic efforts and further Russian moves. 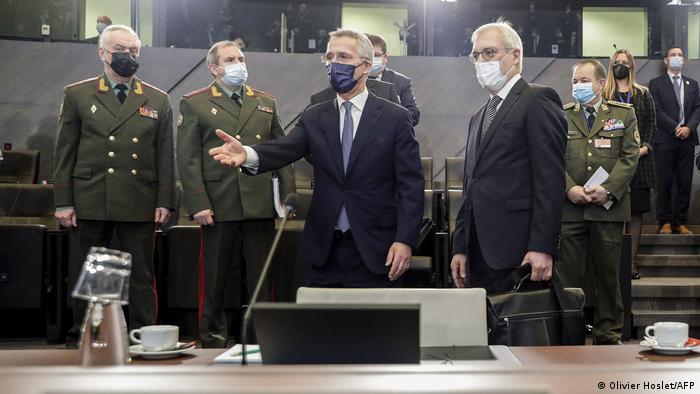 After not meeting for more than two years, NATO and Russia once again held talks in January

Speaking at the Atlantic Council think tank, retired General Philip Breedlove, the former NATO supreme allied commander in Europe,  praised this decision. He encouraged the alliance to look at other "options that would tell [Russian President Vladimir] Putin that he's going to get the opposite of what he asked for."

One of those options, Breedlove said, is something he would have already liked to see when he was NATO's top military commander from 2013 to 2016, during which time Russia invaded Ukraine. Noting that the US and other nations are now sending additional fighter jets for the air policing missions that cover the Baltic states and much of NATO's other territory, Breedlove argued that the time had come to upgrade that function and give it some teeth.

With US troops on high alert, Ukraine calls for calm

"Air policing is a peacetime function for renegade aircraft," he said. "We should be changing NATO now into an 'air defense' posture. Give our aviators the rules of engagement and the special instructions that would allow them to respond to a bellicose action."

In addition to the heightened troop alert, Breedlove suggested "possibly moving elements of NATO's Very High Readiness Joint Task Force (VJTF) and other things to improve our positioning in the forward area." The VJTF is the spearhead component of the 40,000-strong NATO Response Force, a multinational force consisting of some 20,000 troops. The VJTF reaction time has already been shortened this year from seven days down to five.

Those forces would deploy even more quickly than that if needed, said the former commander of the US Army in Europe, General Ben Hodges. "If you're here telling me I have five days' notice to move, then I'm going to be ready to move in one or two days," he explained.

He recommended also looking at other ways to convince Moscow it doesn't want to provoke a conflict with NATO. "Where can we create problems for [Russia] somewhere else?" he suggested. "How do we get the advantage? How do we threaten the port of Sevastopol?", referring to the key Black Sea port seized by Russia when it illegally annexed the Crimean Peninsula in 2014. 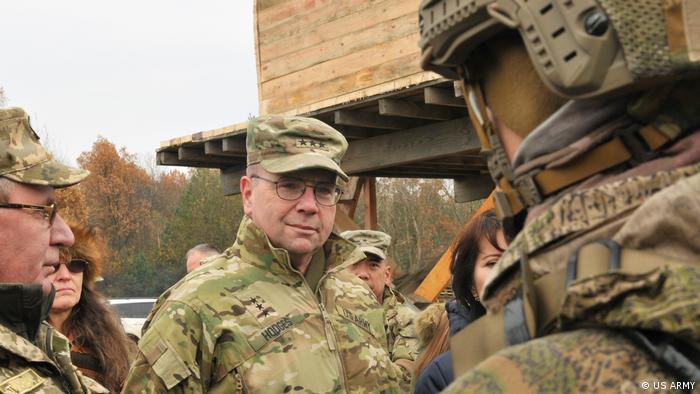 One idea Hodges would not support is the concept of sending US troops into Ukraine to act as a sort of "trip wire" deterrent to a Russian invasion. That, he believes, would "create a real problem for all of our European allies, [and] in my view, would undermine the unity of the alliance because most of them would see the US as needlessly doing something that is more provocative."

"Normally, I don't care about provoking the Russians," Hodges told DW. "This time I would not advise doing that." What the general said would be preferable is perhaps having the US Air Force and Army train Ukrainians to upgrade their air and missile defense capabilities.

Unfortunately, he believes the chances that Kyiv is going to need those defenses continues to increase each day. "[Russia] has shown no indication that they're thinking seriously about de-escalation," he said. "They're trying to apply maximum pressure in hopes that we will crack and that somebody will finally say 'For the love of God, please just tell them we're not going to let Ukraine in [to NATO]' and and then they can declare victory and walk away."

That, he said, would be a "catastrophe for this administration, for the alliance and for the security and stability of Eastern Europe."

But things aren't going that way, not for NATO and not for the Kremlin. Romania's new battlegroup is likely just months away. "Long overdue," Hodges concludes.