The US has put 8,500 troops on standby as NATO has announced it will ramp up its presence in Eastern Europe amid Russian invasion fears. 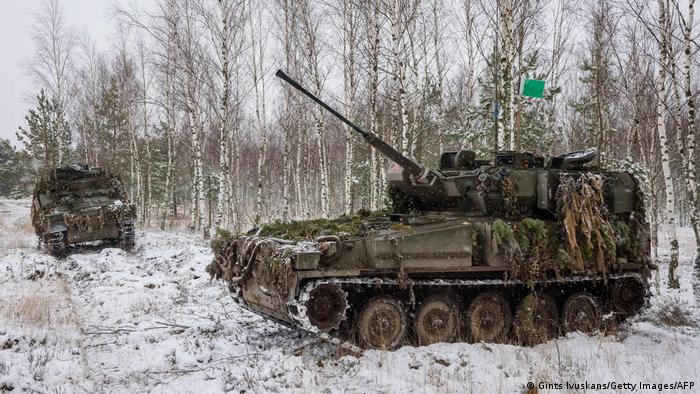 Russia has urged NATO troops to leave Romania and Bulgaria, but those countries refuse to concede to Moscow's demands

The NATO defense alliance on Monday said it was dispatching additional fighter jets and ships to Eastern Europe amid tensions with Russia.

The move could escalate tensions in the Ukraine-Russia crisis, after Russian President Vladimir Putin warned that any military buildup in the region by the trans-Atlantic military alliance would cross a "red line."

NATO Secretary-General Jens Stoltenberg said US President Joe Biden and European leaders stand united with the western military alliance in their warning to Moscow that a Russian attack on Ukraine will provoke a tough response.

"We agree that any further aggression by Russia against Ukraine will have severe costs," Stoltenberg said on Twitter after an online meeting with Biden, and the leaders of France, Germany, Italy, Poland, Britain and the European Union.

EU foreign ministers gathered in Brussels earlier to discuss a coordinated response to the crisis, with US Secretary of State Antony Blinken attending virtually. Meanwhile, the US, UK and other countries were withdrawing embassy staff from Ukraine amid security concerns.

What has NATO said about troop numbers?

In a statement, NATO said Denmark was sending a frigate to the Baltic Sea and four F-16 fighter jets to Lithuania. Spain was dispatching ships to join NATO naval forces, and France was also looking at sending forces to Romania, according to DW Brussels Bureau Chief Alexandra von Nahmen.

The Netherlands and the US were also ramping up their commitments in the region. A NATO diplomat told Reuters news agency that the US is considering moving some troops from Western Europe to Eastern Europe in the coming weeks.

The Pentagon said Monday that 8,500 US troops had been placed on "heightened alert."

Stoltenberg said he welcomed "Allies contributing additional forces to NATO. NATO will continue to take all necessary measures to protect and defend all Allies, including by reinforcing the eastern part of the Alliance."

Muscovites react to prospect of war

Russia has reacted angrily to the announcement. Moscow has previously called on NATO to scale back its forces in Eastern Europe and deny membership to Ukraine.

Kremlin spokesperson Dmitry Peskov on Monday accused Washington and NATO of escalating tensions in the region through "information hysteria" and "concrete actions."

The Russian RIA news agency reported that at least 20 Russian ships were mobilized in the Baltic Sea on Monday for drills.

Western countries are concerned that Russia may attack its neighbor, with as many as 100,000 Russian troops having gathered near Russia's border with Ukraine.

UK Prime Minister Boris Johnson told broadcasters on Monday that a Russian invasion of Ukraine would be a "disastrous step," calling it a "painful, violent and bloody business."

A spokesperson for Johnson also ruled out the idea of sending UK combat troops to Ukraine, as other NATO countries dispatch additional forces to the region.

"The reason we put that out into the public domain is we are going to call out every instance of Russia trying to influence democracy, trying to subvert Ukraine, false flag operations and sabotage," Truss said Monday in Brussels. Russia has strongly rebuked those allegations.