Emmanuel Macron heads to Russia on mission to de-escalate | Europe | News and current affairs from around the continent | DW | 07.02.2022

Emmanuel Macron heads to Russia on mission to de-escalate

The French president is traveling to Moscow to meet his Russian counterpart Vladimir Putin. Emmanuel Macron wants to de-escalate the Ukraine crisis and strengthen the political role of the Europeans. 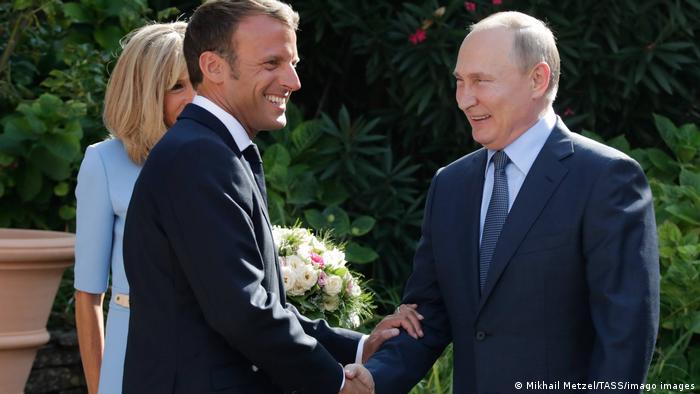 Emmanuel Macron has met Putin several times, here in southern France in 2019, but the relations have cooled

If it is true that there will be no shooting as long as the opponents are at the negotiating table, then Emmanuel Macron's visit to Moscow on Monday certainly serves the purpose of buying time in the face of a potential threat of war. France is presiding over the Council of the European Union this term, and thus the French leader has some legitimacy to lead a diplomatic offensive by European countries.

Also on Monday, France's Foreign Minister Jean-Yves Le Drian and his German counterpart Annalena Baerbock will travel to Kyiv to reaffirm EU solidarity with Ukraine. A week later, German Chancellor Olaf Scholz will travel to Ukraine and Russia to put his own political weight onto the scale.

Negotiating as long as possible

Macron has spoken with Vladimir Putin on the phone several times in recent days, more often than any other European head of government. French diplomats believe that the Kremlin leader is not entirely averse to engaging in talks with leaders in Paris and other EU capitals, despite his initial refusal to talk to the Europeans at all, recognizing only US President Joe Biden as a negotiating partner.

The French president made clear what he wants to achieve at his joint press conference with the German chancellor at the end of January, when he said that one should never "give up the dialogue with Russia." He named as partners in this dialogue NATO, the Organization for Security and Cooperation in Europe (OSCE), the meetings of the so-called Normandy format (France, Germany, Russia, Ukraine) and, finally, the EU. "We must exhaust all these forms to the last," Macron said, to ensure the security of Ukraine's borders and Europe as a whole.

There has already been a meeting of high-level government advisers in the Normandy format in Paris in January. The very fact that it could take place is seen by Paris and Berlin as a sign that reviving talks would not be entirely impossible. The contact group on issues around the Ukraine conflict last met at the presidential level in 2019.

Macron on the campaign trail

It's all about ways to de-escalate, the French president said. The beginning of the presidential election campaign in France is also playing a role: All top politicians like to show themselves on the world stage as a peacemaker. The risk for Macron is that he could return from Moscow empty-handed and that his push could become embarrassing rather than laudable, providing ammunition for his political opponents. According to Tara Varma of the European Council on Foreign Relations (ECFR), the issue of Russia "gets the candidates blood flowing: French politics has a pro-Russian strand that transcends traditional fault lines between the far-right and the far-left, with figures on both sides advocating a rapprochement with Russia."

Yet behind Macron's efforts to forge a special relationship with the Russian president is a steep learning curve. At the beginning of his term, he was still trying to impress Putin by inviting him to the splendid Palace of Versailles or to establish a personal relationship with him at his vacation home on the Mediterranean coast. But the Russian president ignored the French advances, and the hoped-for dialogue on a European security architecture did not materialize.

Sylvie Kauffmann, editor-in-chief of the French daily Le Monde, believes the president and his government have since become more realistic. "The main result of Macron's charm offensive was to antagonize some of his European partners," she wrote recently. The announced deployment of Russian mercenaries from the so-called Wagner Group to Mali, where the French military mission is under heavy pressure, has opened Paris' eyes, she added. 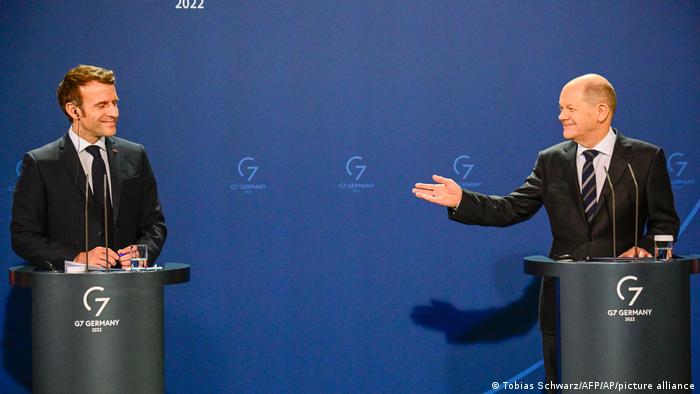 Macron now calls Russia a "destabilizing power" that is attacking former Soviet republics with hybrid attacks, which is worrying for Europe's security as well. The French government insists it was the first to threaten "serious consequences" back in November if Russia invaded Ukraine. Paris no longer wants to be accused of being too soft or even complicit with Moscow, or of dividing the EU on the issue.

Before his trip to Moscow, Macron sought to close ranks emphatically with the German chancellor, appearing more resolute than Scholz. The French president also pointed out that Poland currently holds the presidency of the OSCE, and Berlin the presidency of the G7, offering both countries a forum to make contributions to de-escalating the crisis.

Some Eastern European governments are nevertheless angry because they felt they were not sufficiently included in the run-up to the meeting. The German government has therefore invited the heads of government of the Baltic countries to Berlin, and the chancellor will travel first to Kyiv and then to Moscow in mid-February. French diplomats, in turn, point out that the conflict can only be resolved in Moscow.

In any case, President Macron wants to dispel the impression that Europeans have no say in diplomatic attempts to reduce tensions on their eastern border, according to Varma of the ECFR. For France, then, the core issue is European sovereignty. Paris, she said, wants to strengthen the EU's position while doing everything possible to avoid war.

In doing so, the French president is putting Europe's security first. He is not only threatening economic sanctions, but also sending a military signal to Moscow: Paris is deploying French troops to Romania to strengthen NATO's presence there. Reaching out to the Russian president while at the same time reminding him of his limits – to what extent that works could become an existential question for Europe.