NATO has described the latest drills as Russia's biggest deployment to Belarus since the Cold War. Meanwhile, the US military's most senior uniformed leader spoke with the head of the Belarusian armed forces. 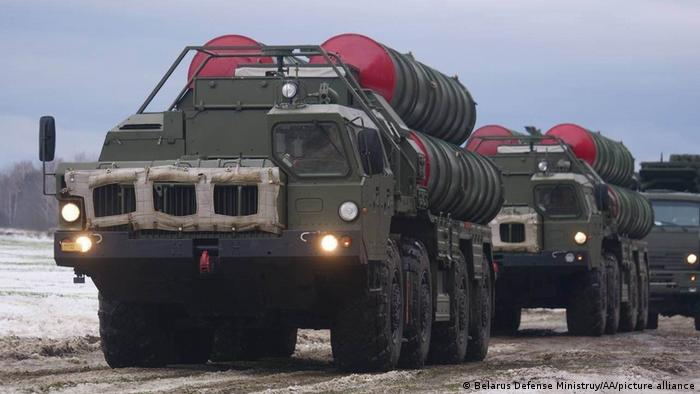 Russian and Belarusian forces are starting a 10-day large-scale military exercise in Belarus on Thursday.

The drills come amid rising tensions over Russia's buildup of troops near its border with Ukraine.

NATO has described the "Allied Resolve drills" as Russia's biggest deployment to ex-Soviet state Belarus since the Cold War.

US General Mark Milley, the Chairman of the Joint Chiefs, spoke to his Belarusian counterpart, Maj. Gen. Viktor Gulevich, on Thursday, the Pentagon said.

In a release, the Pentagon said, "The phone call facilitated communication between both leaders to reduce chances of miscalculation and gain perspectives on current European security."

The release concluded that the two sides had "agreed to keep the specific details of their conversation private."

What is the scale of the drills?

According to Russia's Defense Ministry, the drills will take place at five military training areas over the course of 10 days, mostly in western and southwestern Belarus, near the country's borders with Poland and Ukraine.

It is unknown how many troops are taking part in the drills.

Moscow Carnegie Center researcher Artem Schreibman wrote that "there had never been such a large number of Russian military personnel on Belarusian soil in the entire post-Soviet period." NATO Secretary-General Jens Stoltenberg estimated the number of troops as being around 30,000.

Carl Bildt, former Swedish prime minister and co-chair of the European Council on Foreign Relations, told DW the buildup of Russian troops near Ukraine "is the largest such buildup we have seen in Europe for decades."

Carl Bildt: 'One should be hopeful, but one should also be realistic'

It is unclear whether nuclear weapons would be part of the drills. According to Russia's Defense Ministry, shortly before the military exercise started medium-range strategic bombers were on patrol over Belarus.

Wolfgang Richter, a military expert at the German Institute for International and Security Affairs (SWP), told DW there was nothing unusual in such patrol flights: "the US does this as well, these are political signals." He added that such flights are normally carried out without the involvement of nuclear weapons.

"Iskander-M" rockets, which NATO says were brought to Belarus, can also be equipped with nuclear weapons. Richter pointed out that in Russia these weapons have so far been equipped with conventional weapons.

What are Ukrainian and NATO movements?

Ukraine is starting military exercises on Thursday in response to the drills in Belarus.

Defense Minister Oleksii Reznikov said this week Ukrainian training would also run from February 10 to February 20. Ukraine has not reported the number of military personnel and weapons involved in its exercises.

Lithuania's Prime Minister Ingrida Simonyte said her country would send US-made Stinger missiles to Ukraine in the coming days while on a visit to Kyiv Thursday ahead of a trip to Berlin to meet the German Chancellor.

On Twitter, Simonyte wrote, "I hope and sincerely wish that Ukraine never has to use them."

The new deployment of 350 troops adds to the 150 troops the UK sent last December when Poland was confronting a migrant crisis provoked by Belarus on its eastern border.

Britain has also ordered 1,000 additional to be "put at readiness in the UK to support a humanitarian response in the region should it be needed," the prime minister's office said.

In the meantime, the UK is nearly doubling its NATO deployment in Estonia from 900 to 1,750.

Last week, US President Joe Biden approved the deployment of additional forces in eastern Europe. Under the plan, the US will send about 2,000 troops to Poland and Germany, and 1,000 will move from Germany to Romania.

Many Western analysts do not see NATO troop deployments to eastern Europe as a direct defense of Ukraine.

"In terms of numbers, this is a symbolic show of resolve that NATO is united and will defend its members of attacked," Kurt Volker from the Center for European Policy Analysis told DW. "For Ukraine, we’ve provided arms and training but we are not providing direct forces, nobody is."

What are the reactions to the drills in Belarus?

The US described the exercises as "escalatory."

"As we look at the preparation for these military exercises, again, we see this as certainly more an escalatory and not a de-escalatory action," said White House spokesperson Jen Psaki.

Ukraine's President Volodymyr Zelenskyy said in a statement that "the accumulation of forces at the border is psychological pressure from our neighbours."

German Chancellor Olaf Scholz said Wednesday that all diplomatic channels must be pursued, but allied forces must be prepared to act if Russia invades Ukraine. "The task is that we ensure security in Europe, and I believe that will be achieved," he said after talks with his Danish counterpart Mette Frederiksen.

"This is a very violent gesture that concerns us," Le Drian said.

Moscow and Minsk deny that the drills could serve as cover for an invasion of neighboring Ukraine, and Russia has said it has no intention of establishing a permanent deployment in Belarus. Belarus' General Staff announced that Russian military personnel would leave the republic after the drills, and Kremlin spokesman Dmitry Peskov that "the troops will return to their bases."

Russian Defense Minister Sergey Shoygu said that the drills were being held for the "military security of both countries and the fight against terrorism."

According to Carl Bildt, Russia is attempting to "change the entire European security order."

Tensions around Russia's military buildup near Ukraine have launched a flurry of diplomatic activity, with talks among different European countries continuing Thursday.

Roman Goncharenko contributed to this report

US President Joe Biden has said there is no chance of the Nord Stream 2 gas pipeline project going should Russia mount an offensive. Chancellor Olaf Scholz, on his first White House visit in office, was more guarded.